Billionaire Viscount Chelsea’s son, 19, caught speeding through roadworks claimed he ‘lost concentration because he was excited at being close to his family’s Scottish estate’

The son of a billionaire aristocrat who was caught speeding claims he lost his concentration because he was so excited at being near his family’s Scottish estate.

The Honourable Charles William Llewellyn Cadogan, 19, was driving his grey BMW at 71mph in a 50mph zone when he was pulled over.

The former Harrow School pupil – whose family is worth £6.5billion – said he put his foot down because he was close to his family’s sprawling 2,000 acre estate. 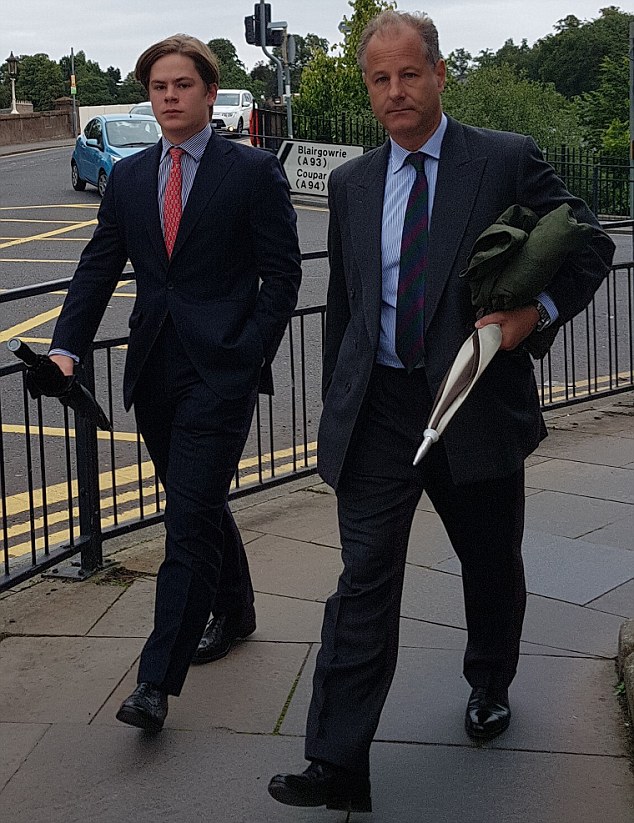 The 19-year-old admitted speeding on the A9 but escaped a ban after telling a court he had been told that his father, Viscount Chelsea, felt let down by his behaviour.

Cadogan, whose family is one of Britain’s richest, was handed a £300 fine for speeding – and given 28 days to pay. He had four points imposed on his licence.

The teenager admitted he was speeding when he was pulled over by police on the outskirts of Perth on 27 June.

Cadogan – whose grandfather is the Earl of Cadogan – admitted clocking over 71 miles per hour through roadworks on the A9 western bypass. The speed limit was 50 mph.

The teenager, who was accompanied to court by his father, represented himself and handed a letter pleading guilty and explaining the incident to the Justice of the Peace.

‘I write this letter of mitigation to apologise for the offence I have committed,’ he said in the letter to Perth’s Justice of the Peace court.

‘I completely understand why I have been charged. I was driving from my home in London to my home in Scotland and the excitement of being close to home after a long drive perhaps led to a momentary blip of concentration in my speed for which there’s no excuse.

‘My deepest apologies go out to those I have troubled in my actions and the process of my offence. I have never had any problems with the police previously and I intend to have no future problems.

‘All I can ask is for forgiveness as everyone makes mistakes, especially at a young age.’

Defending himself in the dock, he added: ‘It was irresponsible of me. I apologise for what I’ve done. I believe I’ve learned my lesson and it won’t happen again.’

Fiscal depute Tina Dickie told the court: ‘The incident happened just before 2.15pm. Police were on mobile patrol. At the time major roadworks were being undertaken and a 50 mph restriction was in place.

‘The officers observed the accused’s grey BMW travelling north and were of the opinion it was in excess of 50 mph. Police followed the accused and activated Vascar in their vehicle. His speed was detected as 71.42 mph.

‘The vehicle was stopped and the police spoke to the driver. He was cautioned and charged and stated ‘I apologise.’

The Earl of Cadogan made a fortune from property and owns swathes of high value land in Chelsea which has helped account for a 6.5 billion pounds fortune. He is richer than the Queen.

Cadogan was heading to the family estate at Snaigow in Perthshire when he was stopped by the police.