I would do anything for… him to stop singing: The bizarre moment an MP belts out a Meatloaf song in Parliament – before the Speaker shuts him up

An MP has taken the extraordinary step of singing a Meatloaf cover to hammer home the point he was trying to make after question time in Parliament on Wednesday.

Solomon MP Luke Gosling  got up in Federal Parliament and started to belt out lines to the famous Meat Loaf song ‘Two out of Three Ain’t Bad’ but with his own twist, NT News reported.

Mr Gosling was speaking about the upcoming 40th Anniversary of Territory Day and as such wore a safari suit, which was deemed allowable by NT MPs 40 years ago. 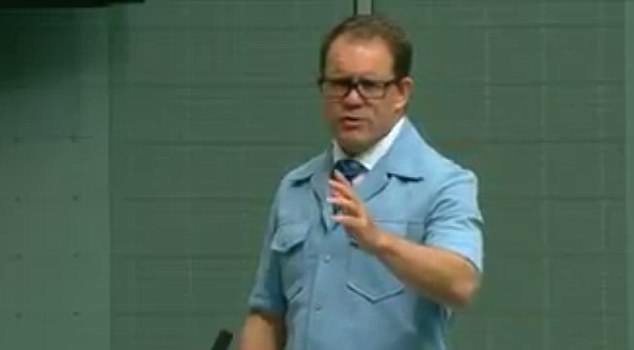 ‘This Sunday is Territory Day and it was on this year 40 years ago that the Northern Territory got limited self government,’ he said.

Mr Gosling went on to praise all that the Northern Territory has to offer before using some song lyrics with his own twist to finish his point.

‘We want you, we need you, but there ain’t no way we’re ever going to give up on full rights for the NT, but don’t be sad because two out of three ain’t bad,’ he sang. Other MPs can be heard enjoying the up beat display after question time but the speaker was forced to cut Mr Gosling off before the end.

After the session Mr Gosling took to social media to share video of the moment and to reiterate his point.

’40 years ago in 1978 the Territory gained limited self government and the right to wear safari suits in the NT Parliament! I spoke today of our celebration of our beloved Territory and called for full Self Government for the NT!’ he wrote.