A senior information technology specialist who tried to extort $2 million from his boss has been convicted of blackmail after he was mistakenly sent the private details of more than 1000 suppliers and contractors.

Charlie Antoski, 47, who had previously held high-level government contracts, was working as a contractor for an IT company when he was accidentally emailed the personal bank account details and private addresses of the firm's 1186 suppliers and other contractors as part of a data breach in November 2018.

The County Court heard that over nine days from November 19 to 28, 2018, Melbourne-based Antoski persistently called a boss at the company – which cannot be named for legal reasons – and made demands for large sums of cash, threatening to report the data breach to the privacy commission and the media. 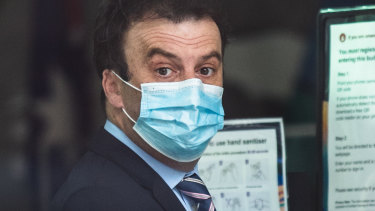 The IT firm – a large Australian company with clients including government agencies – was initially willing to negotiate and pay Antoski $2000, before reporting his blackmail attempts to police in Western Australia.

"You offended thinking the victim company would pay you a substantial sum of money in order to protect itself from such harm," Judge Paul Lacava said on Wednesday.

"But you badly miscalculated and the victim went to the police armed with recording and notes of its conversations with you.

"It was blackmail, pure and simple."

Judge Lacava rejected suggestions the phone calls were for "commercial negotiation" and labelled the offending a serious example of while collar crime.

He said the threat of disclosing the data breach to others had the real potential to damage the company's reputation and cause it financial harm.

"You sought to profit from the situation you found yourself in [and] in a series of phone calls to the executive of the victim company, you threatened to make public the accidental data breach unless compensation was paid to you," Judge Paul Lacava said.

The court heard Antoski was an accomplished IT specialist who had been dux of his year 12 class before graduating from Swinburne University with honours.

Antoski – a married father of two – had lost a five-year senior government contract as a director of strategic decision-making as a result of being charged, the court heard.

A subsequent and "lucrative" position with ANZ Bank was also terminated after it learned of his offending.

"You have had an accomplished and impressive carer in the field of IT with a number of this country’s leading companies, many of them listed on the Australian Stock Exchange," Judge Lacava said.

"I accept you regret what you have done and are remorseful."

Antoski’s legal team had argued that because their client currently ran two companies – a toy importer and digital marketing firm – any criminal conviction could prevent the 47-year-old from travelling overseas to do business.

But Judge Lacava said Antoski’s actions were a serious example of blackmail.

Judge Lacava said he would have sentenced Antoski to three years' jail if not for his guilty plea.

The Office of Public Prosecutions had attempted to prevent reporting on much of the case, using public funds to argue that allowing publicity of the matter – including naming Antoski – could cause reputational damage to the company at the centre of the blackmail attempt.

Lawyers for The Age argued that naming Antoski did not threaten "the proper administration of justice".

Antoski did not receive any blackmail payment from the IT company, but has since paid $50,000 towards its legal costs, the court heard.