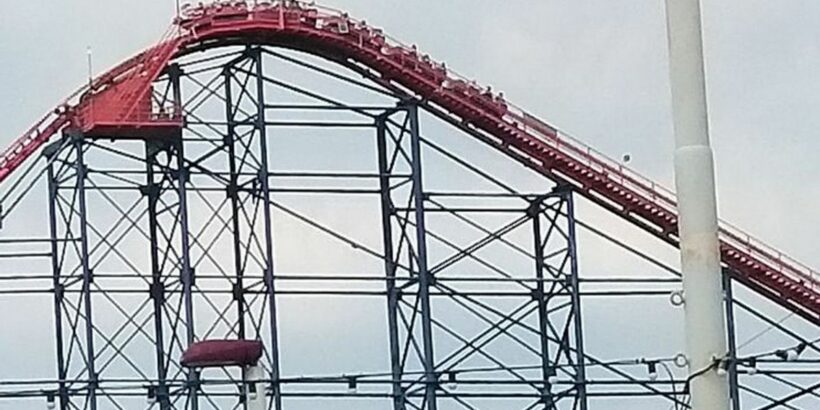 Terrified roller coaster passengers were forced into an emergency evacuation after one of Blackpool Pleasure Beach's most iconic attractions broke down mid-ride.

About 30 people were trapped at the top of the 62ft (19m) Grand National ride at midday in 24C heat.

Theme park staff launched an emergency rescue by scaling the giant structure and escort those on board back to safety on the ground.

At about the same time, another roller coaster at the popular tourist hotspot – The Big One – also broke down at its highest peak, leaving anxious riders 205ft up for five minutes.

But the ride was able to continue soon after. No one had to get off.

One witness told LancsLive: "It looked like they were going to have to head all the way down like they did a couple of months back. Fortunately, two staff climbed up, flicked something, and got it going again."

Steve Ely, from Sheffield, South Yorkshire, on the Grand National ride with his two children, tweeted a photo of the ride stuck at the top of an incline on the rollercoaster.

He also criticised the Pleasure Beach and said all customers were given in compensation was a bottle of water and tickets that could not be used.

An eyewitness waiting to get on the ride said his children were "devastated" as the ride was stopped while the problem was dealt with.

A spokesman for Blackpool Pleasure Beach said: "At 11.55 am on Tuesday June 1 a stoppage occurred on the lift hill of the Grand National.

"All riders were safely escorted down the lift hill, and the ride was checked and re-opened just before 1pm.

"Shortly afterwards there was a very brief stoppage on the Big One lift hill, at 50ft, riders remained seated and the ride continued after five minutes."

Blackpool Pleasure Beach reopened on April 12 as part of the easing of lockdown measures.

It is the second time in less than two months the Big One, which first opened in 1994, has broken down with passengers on board.

In April, stranded riders were forced to climb down the roller coaster's vast stairwell following a technical fault. No one was injured during the incident.

During the first breakdown, park staff were also forced to climb the ride before tentatively guiding visitors to safety by making them walk down.

Photos of the rescue showed passengers climbing down the stairs before they safely reached the ground.

At the time, some took to social media to voice their concerns.

"OMG. Big one stopped right at top today 12ish and the staff had to walk everyone down safely," one wrote. "Well done.

"Think I would have been really scared. Then it was sent round the track empty a few times then we walked home bit of excitement. All worked out ok."

Another commented: "My brother’s in Blackpool and just sent a video of people stuck at the top of the Big One and having to walk down to get off it.

"I’d be welded to my seat. They’d have to get me out with a crane."

Formerly known as the Pepsi Max, the Big One was once the world's tallest and steepest roller coaster.