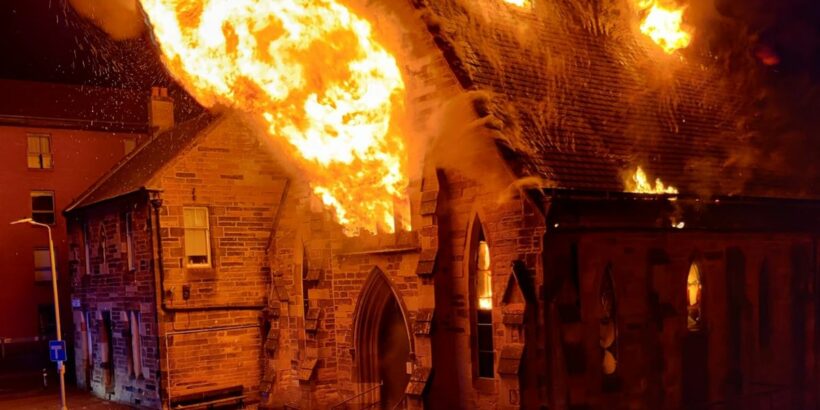 Residents of a Glasgow suburb were evacuated as a historic old church scorched ablaze during the early hours of this morning.

One person was rescued from the Roman Catholic Parish Church of St Simon, a 160-year-old place of worship in west Glasgow.

That parishioner was treated onsite as a precautionary measure while huge flames swallowed up much of the beautiful old building.

Images show a massive fireball shoot out of one window and harsh flames extend through the Victorian-era roof.

Nearby residents were evacuated and others were told to avoid central Partick this morning by firefighters who worked hard to extinguish the gutting flames.

What do you think about this story? Have your say and see what others think in the comments.

Glaswegians were also told to close windows and doors just in case the incredible fire spread to surrounding buildings.

The Scottish Fire and Rescue Service tweeted: "More than 30 firefighters are currently in attendance at a large fire within a church on Partick Bridge Street, Glasgow, after the alarm was raised at 2.40am.

"Nearby residents advised to keep windows and doors closed, adjacent properties have been evacuated as precaution."

A spokesman added: "Crews are expected to remain in attendance for some time."

Meanwhile a resident told GlasgowLive: "Fire came from inside and broke out through the large stained glass at the front facade. The roof collapsed around 3:30am.

"Church owner/tender Mary who lived in the adjoining house was evacuated with no injuries. House now under siege from the fire.

"The inferno rages on toward the back of the 150-year-old structure where two cranes are trying to extinguish the blaze."

No one is hurt and the surrounding buildings are as yet untouched by the flames.

Built in 1856, the gorgeous church survived Blitz damage to the city and was renovated in 1956 before undergoing a major refurbishment in 2008.

It's far from the first major fire in central Glasgow over the past few years, with a Strathclyde University building wrecked by fire in June 2019.

A block of flats was destroyed by flames in December 2019 and the city's beloved School of Art was ruined by inferno in 2018.