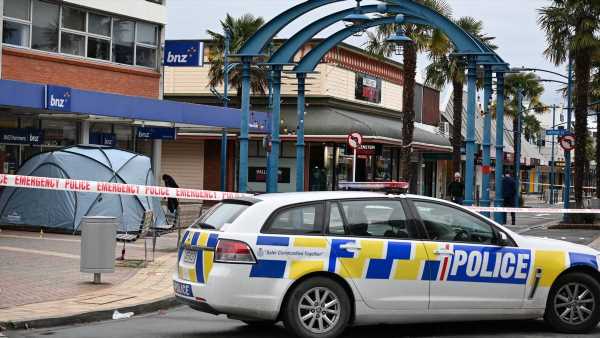 A gang boss has told how two murder accused are regular churchgoers who are “very remorseful” over the murder of a Tongan RSE worker.

A 33-year-old male and a 37-year-old male have appeared in Blenheim District Court this afternoon charged with murder following the death of Hiko Lynch, 23.

The men, who were both granted interim name suppression, are alleged members of the Rebels Motorcycle Club.

They were both remanded in custody until their next appearance on July 9.

Speaking outside the court, gang leader AJ Graham said the men had been drinking on Saturday night.

“I woke up on Sunday morning and heard the news, I was shocked. I didn’t expect this from these men, men who go to church.

“They are seriously remorseful, they are very religious and alcohol was involved,” he says.

Ten people were arrested yesterday morning following the stabbing that killed the horticulture worker and wounded two others on Sunday morning.

Police say the altercation was between Rebels gang members, from outside Marlborough, and Recognised Seasonal Employer (RSE) workers.

Police rushed to the scene at Club Envy on Market St just before 3am on Sunday morning.

AJ, a life member of the Rebels, says he was in Blenheim visiting his girlfriend and planned to stay.

“I will be here supporting,” he said.

Appearing separately, the accused remained silent while in the dock, both dressed casually with their hair tied back.

There was increased security at the courthouse, both on the way in and in the court where the two appeared.

The community has been left reeling in the wake of the killing.

Marlborough Mayor John Leggett says his thoughts are with the family and friends of the young man who died.

“There is a real sense of shock and sadness in the community and my thoughts go out to the man’s family and friends.

“The reaction I have had from our community is one of shock and sadness that something this like can happen here.

“I know the RSE worker community is tight-knit and strongly supporting all those involved in this tragic incident. There is also support coming in from the wider community as well.

“Events like this remind us that we are not immune from the social issues that affect New Zealand as a whole. But this is unusual for us and something we as Marlburians are not used to having at our front door.”

“It is a very sad event – a leveller for us all and a reminder of how precious life is,” he says.

The fatal stabbing incident comes just days after official statistics showed Marlborough to be one of the safest places to live in the country.

Mayor Leggett praised the Blenheim Police and emergency services for their swift response in the early hours of Sunday morning.

“Our police and emergency responders have a challenging job at the best of times and they deserve our thanks – this would have been a very difficult event for them to deal with.”

Two people, including Vea Tonga, remain in Wairau hospital in a stable condition. The other victim has not been named.

A man who was in the nightclub says gang members had been intimidating and eyeballing people in the lead-up to the stabbings.

“We acknowledge that today’s incident will be concerning to the wider community,” Simon says.

“Police can assure the community that violent crimes will not be tolerated, and we will hold those who offend to account.”

Police continue to ask that anyone who was in the area at the time and may have seen anything or has video footage taken at the Club Envy or around the Market Street area in the early hours of Sunday 20 June.

A dedicated portal has been set up to allow anyone with images or recordings to upload this information.

It can be accessed via https://alaia.nzpolice.org/

Alternatively, information can be provided anonymously by phoning Crime Stoppers on 0800 555 111.