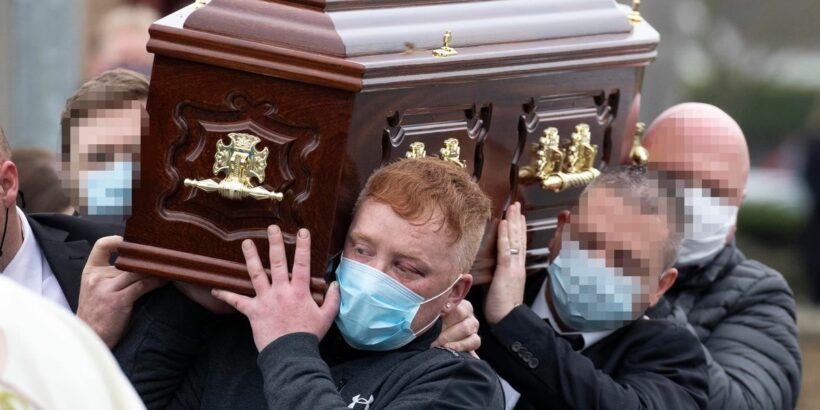 A man who claims he didn't know his uncle was dead when he brought him to a post office to collect his pension was among those carrying the coffin at his funeral.

Peader Doyle, 66, was laid to rest at 11am on January 24 at St. Mary’s Cemetery, Carlow, after passing away “suddenly” last Friday.

His nephew Declan Haughney was photographed carrying his coffin just days after he carried his uncle's body into a post office on Staplestown Road with his friend.

Since the bizarre 'Weekend at Bernie's' style incident, Declan has been branded as a 'murderer' and accused of trying to take his uncle's money, which he categorically denies.

He claims Peader passed away while walking under a bridge at Pollerton Road, less than two minutes into the five-minute journey to the post office.

However, they continued to drag him to the Post Office, by linking his arms and dragging him there.

Talking to a reporter, while retracing the route, the 40-year-old added: “This is no word of a lie, he started dragging his heels from you see the yellow sign that’s there?

"But we didn’t even think of it as anything.

"We were grand like then all of a sudden he started going all slumpy.

“We thought nothing of it because Peadar had had heart attacks and all.”

His friend claimed that Peader became "heavier and heavier" and "I couldn't hold him anymore."

Mr Haughney adds they were still holding him when they got into the queue but when they let his uncle go he "just dropped".

Speaking to Sunday World, his friend said: "The papers are saying he was already dead but that's bulls**t.

Declan is believed to have lived with his uncle and has claimed that they shared all the bills.

However, Haughney believes that he is being accused of murder because of his criminal history as he has served two years in prison.

He also has had a drugs problem but has stayed clean for the last three years, and once went to prison for fraud having stolen his aunt's bank card and pin number.

Pictures of him taken this week show he has a black eye and facial injuries, which he claims are the result of an “incident” that took place last Friday.

He added, having given a voluntary statement to gardai: “He’s my uncle. The man who reared me.

"I’m shellshocked. My heart is torn in two.”

Reports say both Declan and his pal have been interviewed by police in the ongoing investigation.

A Gardai spokesperson has said: "Gardaí are investigating all the circumstances of the discovery of the body of a male at a business premises in the Carlow area on the morning of Friday 21st January 2022.

"A post mortem of the deceased has been concluded. Post mortem results are not released for operational reasons.

"The focus of Garda enquiries is now on the ancillary events that took place at the business premises connected to the recent death of the male."