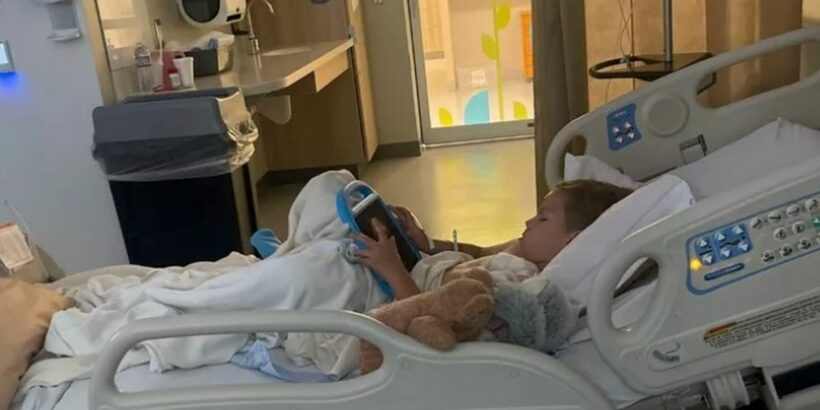 Sign up to TeamDogs for the best dog news, pictures and stories.

Shocking images showed the bloody aftermath of an eight-year-old boy being viciously mauled by a dog.

Connor Aranda is currently on a long road to recovery after a Labrador retriever attacked him at a home day care facility in Apple Valley, California.

The young boy suffered extensive injuries to his chest and face and emergency reconstructive surgery has left him disfigured, in pain, unable to speak and in unimaginable pain.

The alleged incident happened on Tuesday at an unnamed day care centre.

Laura Kemp, the boy's grandmother, said that Connor will need several more surgeries to repair his lips and he will require many visits to physical therapy for his recovery.

Reliving the horror of the day, the worried nan said: "I received a call from my daughter that Connor was attacked by a dog while at day care. I raced to pick her up from work. My daughter was completely devastated, shaking in absolute fear of the worst.”

A spokesperson from the Apple Valley Sheriff's Station told the Daily Press that a request for service was not made with them, however, KTLA reported that the boy’s mother is considering legal action over the attack.

The single mother, with two younger children also in her care, is having to take time off work to see her son at the hospital, so the grandmother has set up a Go Fund Me page to help with medical costs.

On the page, she wrote: "We would like to raise money so Connor's mom does not have to worry about lost work and mounting bills.

The nan also said that the incident was "completely unavoidable" and it was "heartbreaking" to see her grandson in so much pain.

The facility's operator told KTLA that the day care was unlicensed and that the dog was removed from the home.

The Labrador will be euthanized by San Bernardino Animal Care and Control, which is investigating the incident.