Blue collar workers are flocking to Theresa May and fuelling a Tory polling lead over Labour, new figures revealed today.

Data from YouGov suggest working class voters have surged to the Conservatives and now favour Mrs May’s party by 43 per cent to 40 per cent.

The figures are a reversal from January when Jeremy Corbyn’s Labour led in the group by 46 per cent to 35 per cent.

The turnaround underlines the surprise results at last week’s local elections when the Tories surprisingly held ground while Labour failed to make progress. 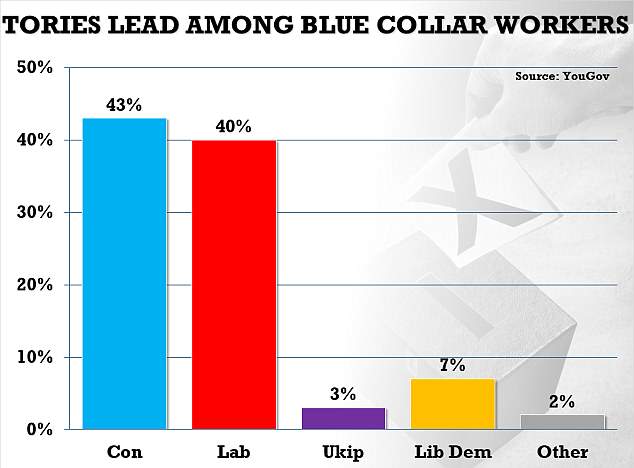 Data from YouGov suggest working class voters have surged to the Conservatives and now favour Mrs May’s party by 43 per cent to 40 per cent. In January, Labour led 43-40

Across the country, the poll suggests support for Labour is falling in almost half of the 50 most marginal constituencies.

Overall, the YouGov estimate the Conservatives are backed by 43 per cent of voters, up one point, and Labour by 38 per cent.

The figures are another signal Mrs May has stabilised her position and regained the initiative over Mr Corbyn since last year’s disastrous general election and despite Tory infighting over Brexit.

She has been boosted by a series of foreign policy challenges, including the nerve agent attack in Salisbury and coalition bombing of the Assad regime in Syria.

A report accompanying the analysis concluded: ‘Overall these results are slightly worse than 2014 and nowhere near the level that oppositions have recorded before winning general elections.

‘Labour will need to improve significantly in the non-metropolitan marginals to have any realistic chance of a majority in a future election.’ 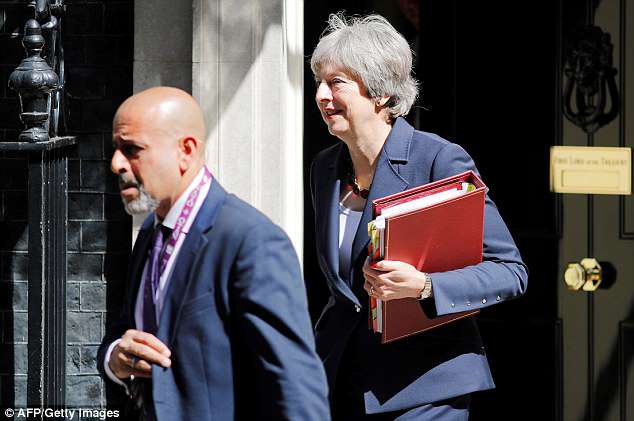 Blue collar workers are flocking to Theresa May and fuelling a Tory polling lead over Labour, new figures revealed today

At last week’s elections Labour failed to snatch any of its key target London boroughs from the Conservatives – despite hopes they could take advantage of anger over Brexit.

And their main target council of Barnet fell to the Tories amid widespread anger among voters at the Labour leader’s failure to tackle anti-Semitism.

In the biggest test of public opinion since the General Election, Labour’s efforts to wrest the strongholds of Westminster, Wandsworth and Barnet from the Tories fell flat.

The Tories managed to comfortably hold on to their London ‘crown jewel’ boroughs despite fears they may lose them amid opposition to Brexit.

And in Leave voting areas outside London, the Tories managed to make a series of gains as the Ukip vote collapsed and switched to Mrs May. 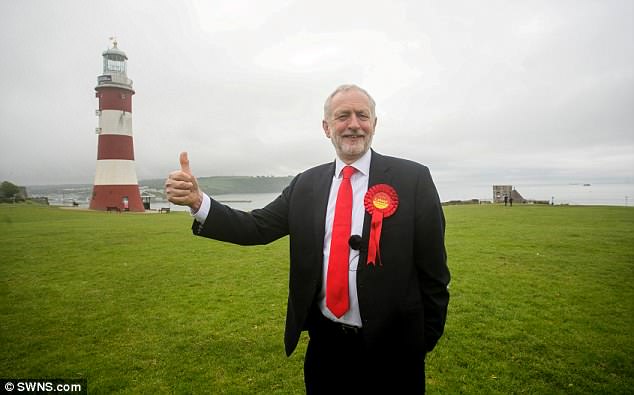 A series of foreign policy dramas in recent weeks appear to have hurt Jeremy Corbyn to Mrs May’s gain, according to the latest polls

The Conservatives took control of Nuneaton and Bedford Council – a bellweather for General Elections – and hung on to Dudley and Swindon.

In Barnet, where Labour needed just one seat to secure control, the Tories entrenched their position – with defeated councillors launching a furious attack on Mr Corbyn for failing to get a grip on the anti-Semitism crisis.