Singapore: From outside the two shipping containers he has converted into a beach house east of Dili, Jose Ramos-Horta has for years watched whales swim close to the shore.

“I often sit there and we see them passing in big groups,” the former East Timor president and Nobel Peace laureate told The Sydney Morning Herald and The Age.

The waters north of south-east Asia’s newest country have long been known as a sanctuary for marine life, boasting some of the richest underwater biodiversity in the world.

Now, a new spotting program has not only emphasised that standing but revealed unprecedented numbers of pygmy blue whales migrating through the Wetar and Ombai Straits en route to feeding grounds in the ocean around southern Australia.

Ramos-Horta’s holiday home at Subaun, an hour’s drive from East Timor’s capital, was used as a monitoring site during a recently completed three-month whale season in which a record 500 pygmy blue whales were seen, according to researchers, including as many as 25 each day.

It is the deployment of local fishermen in dugout wooden canoes, however, that has been key to confirming the channel as a globally significant blue whale migration route. 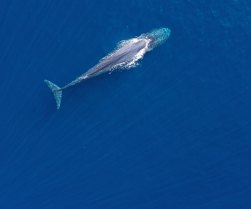 A pygmy blue whales photographed by drone off the north coast of East Timor.Credit:Potenzo Lopes

Since they were recruited last year as volunteer spotters, along with commercial whale tour operators, the number of animals identified has more than doubled.

“Around the world, we believe this to be the largest number of blue whales ever sighted during a whale monitoring program,” said Karen Edyvane, an applied marine ecologist at Charles Darwin University who has run the program.

The pygmy blue whales, which are smaller than other blue whales but can still grow as long as 24 metres and weigh up to 90 tonnes, were spotted as close to 100 metres to the coast of East Timor.

A previous study by the Centre for Whale Research in Fremantle estimated the population of pygmy blues that migrate down Australia’s west coast to be between 700 and 1500. But that research team managed only 200 sightings in six years around Perth Canyon, west of Rottnest Island.

“We still don’t know how big this population is,” Double said. “We know that in the past it was targeted by whalers, particularly by Soviet whalers.

“These whales behave differently to humpback whales and Antarctic blue whales, where we have the classic migration from calving grounds up in the Great Barrier Reef or near Broome, down to the Antarctic to gorge themselves and then head north again.

“These are very temperate and tropical whales and they don’t have that orderly migration we see with humpback whales.”

The results of the study were also lauded by Lindsay Porter, the vice-chair of the International Whaling Commission, who said it had succeeded in “providing invaluable insights to the species’ status and health”.

Amid the excitement over the sheer scale of blue whales monitored passing East Timor from September to November, though, there is concern about their condition.

Edyvane, who is also president of East Timor’s national marine tourism body Assosiasaun Turizmu Maritima, said many of the animals were underweight.

“We’ve had skinny whales before. But this year we saw quite a lot and you could actually see their backbone, individual vertebrae and also the ribs of some of them as well,” she said. 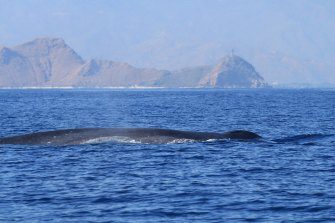 As many as 25 blue whales were spotted in a single day during the recent season in East Timor.Credit:Charles Darwin University

“They were spending all day feeding and trying to find any scrap of food that they could. They were clearly extremely hungry,” she said.

Changing oceanographic conditions have had an impact on whale populations elsewhere at least indirectly, including by diverting the food stocks of endangered North Atlantic right whales, sending them into shipping lanes where they have been hit by large vessels. 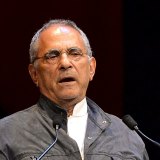 Scientists have also suspected climate change to have contributed to the mass stranding of gray whales in the United States and Mexico, although their population has also risen substantially, increasing the competition for food.

‘They were spending all day feeding and trying to find any scrap of food that they could. They were clearly extremely hungry.’

Edyvane admits much more research needs to be conducted to determine the reasons for the blue whales’ malnourishment.

For Ramos-Horta, who is patron of the marine tourism association in East Timor and the country’s most prominent champion for marine conservation, the number of whales seen in the latest study was “mesmerising”.

He has a long-held desire for the entire area around Atauro Island, which is 25km north of Dili, to be declared a protected marine park where fishing is highly controlled.

But he also believes preserving the wonders of underwater is also the responsibility of others in the region.

“So there has to be a concerted effort, particularly by Timor-Leste, Australia and Indonesia, to work together.”