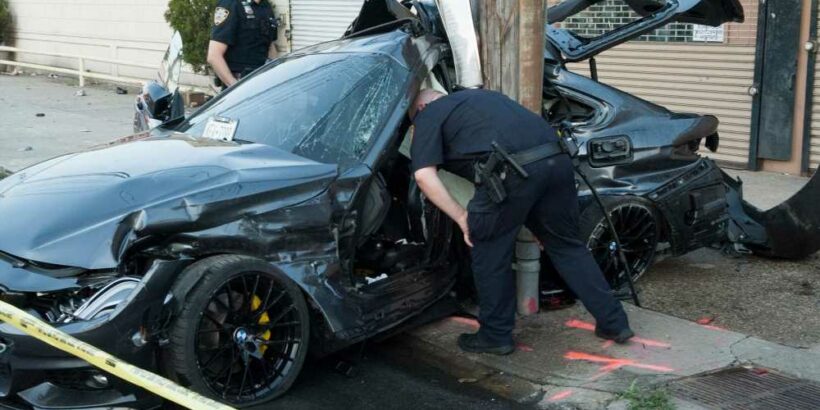 A BMW passenger was killed and the driver was clinging to life in a chain-reaction crash involving four other cars in Brooklyn, cops said.

The victims, a 24-year-old man behind the wheel and a 23-year-old passenger, were in a 2018 BMW 440i sedan heading north on Utica Avenue — in the designated bus lane — at a high rate of speed as they approached the Farragut Road intersection in East Flatbush around 7:30 p.m. Monday, cops said.

Meanwhile, a 2014 BMW X5 SUV, with two men inside, was heading south on Utica Avenue, attempting to turn left onto Farragut Road, when the first car slammed into its front driver’s side corner, police said.

The first BMW then struck a light pole before slamming into the rear of a parked and unoccupied 2012 Mercedes Benz GLK 350 SUV, which in turn collided with a 2015 Honda CRV SUV — also parked with no one inside, cops said.

Responding officers found the driver and passenger of the initial BMW with severe body trauma.

The driver was taken to the Kings County Hospital Center in critical condition, and the passenger was rushed to Brookdale University Medical Center, where he was pronounced dead.

The occupants of the second and fifth vehicles refused medical attention, cops said.