They really are going to need a bigger boat! Boat of anglers catches 20 sharks in one day off the Devon coast

These pictures show a group of anglers who caught twenty massive sharks of different species off the British coast in one boat – in one day.

The five mates and one boat skipper reeled in the impressive haul of blue and porbeagle sharks in a 24 hour period. The pals caught all the sharks off the coast of North Devon.

They used mackerel as bait and reeled in 20 sharks – the largest a 90lb whopper. 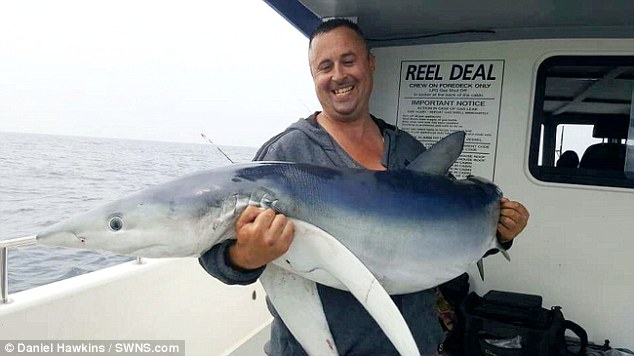 Each fisherman landed two sharks, all of which were returned safely to the sea 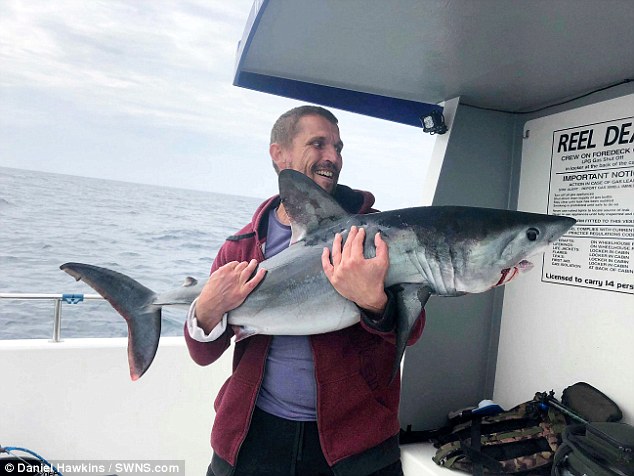 They started on Wednesday (July 11) and by the Thursday morning they had an impressive haul of 20 sharks – all as big or bigger than them.

The group from Somerset and Devon was made up of five anglers aboard the Reel Deal fishing boat, operated by Dan Hawkins.

Each fisherman landed two sharks each, all of which were returned safely to the sea. The biggest was caught by Tom Clayton, 29, who caught one weighing 90lbs.

Tom said: ‘Every time I threw my rod into the water it was pure excitement not knowing what type of shark I was fighting and reeling in.

‘Once hooked the sharks were out of the water for about 2-3 minutes but from the second they were brought out of the water they had buckets of water poured over them, as their health and well-being was our main priority.

‘It was a bit surreal to be holding them. They were smooth and slimey one way but if you rubbed your hand the other way it felt like sand paper.

‘It felt like a massive achievement to have it in my hands but at the same time you have to remember what they’re capable of.’ 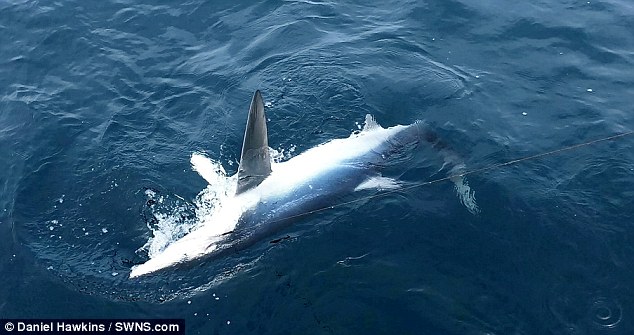 ‘A group of us took advantage of the settled weather and drove off the North Devon coast around 6am.

‘I was first up and within an hour the first fish was hooked! A cracking beagle of 80lb, but sadly it shook the hook.

‘It was incredible to catch so many in one single trip. We even managed to catch a little beagle as we brought the lines in to go home.’