Indian army begin recovering bodies of people killed by the ‘worst monsoon in a century’ in Kerala state as the death toll rises above 400 and 725,000 people are displaced

Receding flood waters has left rescuers he grim task of hunting for bodies left by the worst monsoon in a century in India’s Kerala state as the death toll rose above 400 on Monday.

With nearly 725,000 people packed into relief camps in the southern state, known for its tourist beaches and hill resorts, authorities also fear outbreaks of disease.

After a week of fierce downpours, rainfall eased Monday and flood levels have fallen in many districts. Army helicopters and boats  are keeping up missions to find trapped survivors and drop food and water in isolated villages. 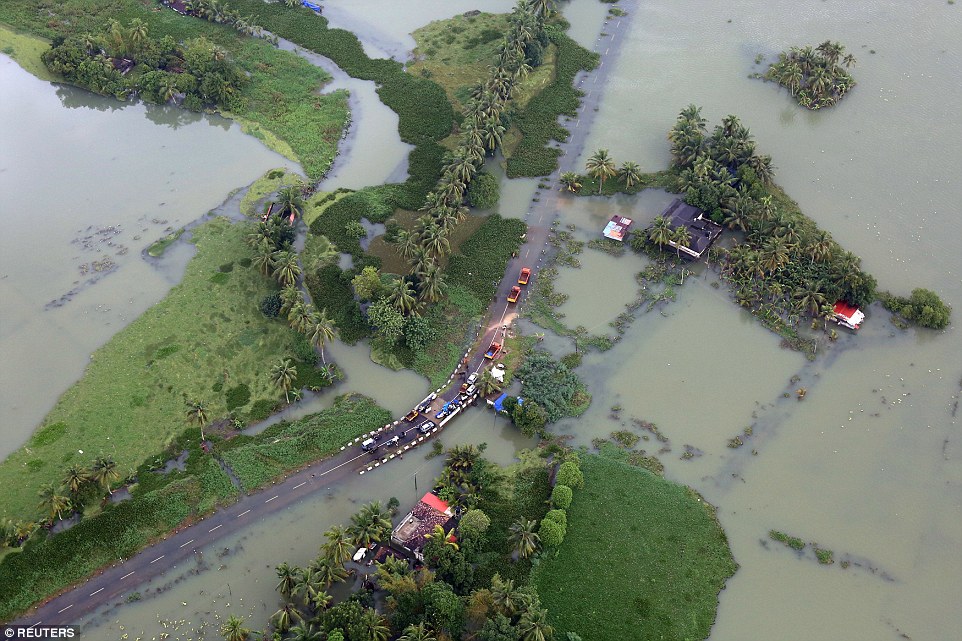 Flooding: An aerial view shows partially submerged road at a flooded area in the southern state of Kerala, India, as emergency services and the army begin recovering bodies of the dead 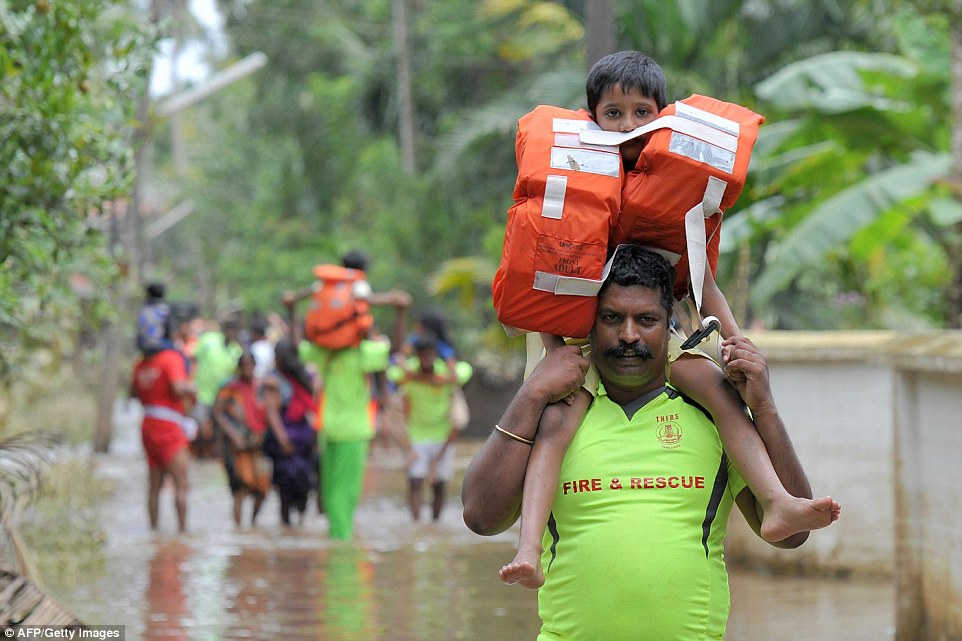 Kerala and Tamil Nadu Fire Force personnel carry children on their shoulders through flood waters during a rescue operation in Annamanada village in Thrissur District, in the south Indian state of Kerala 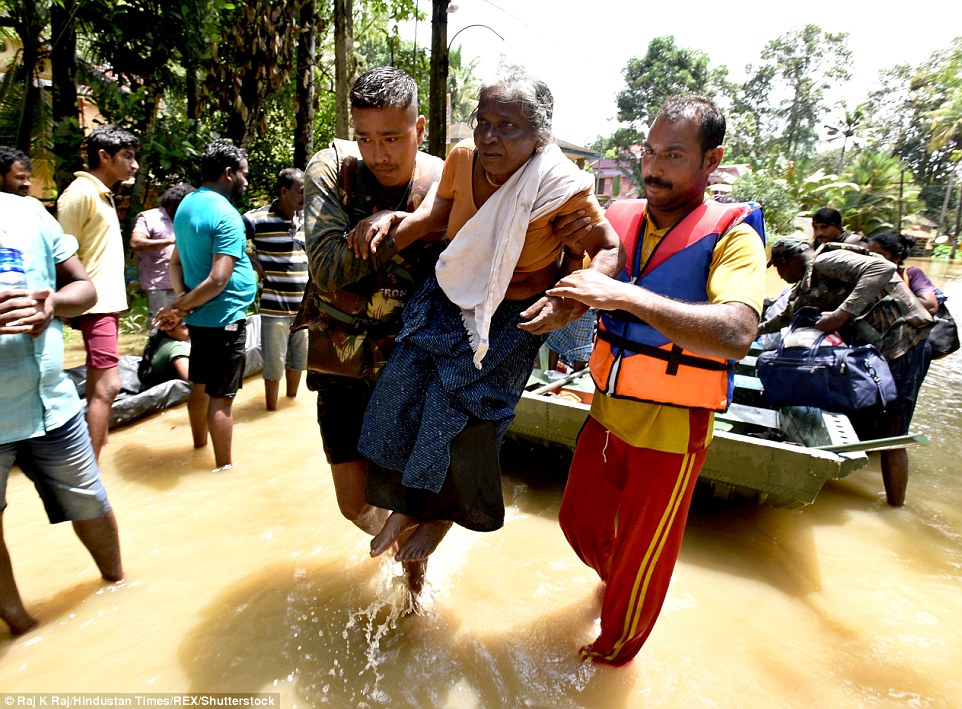 Army personnel rescue local residents in a boat from a residential area at Pandanad in Chengannur Taluk in Alappuzha, in Kerala state in southern India

Officials said 22,000 people were rescued on Sunday. At least 30 bodies were also found taking the death toll above 200 since the torrential rain started falling on August 8, and more than 400 since the monsoon started in June.

‘The total number of people taking refuge at the 5,645 relief camps has risen to 724,649,’ Vijayan told reporters Sunday.

He said health officers would be deployed in each village to check the spread of communicable diseases. 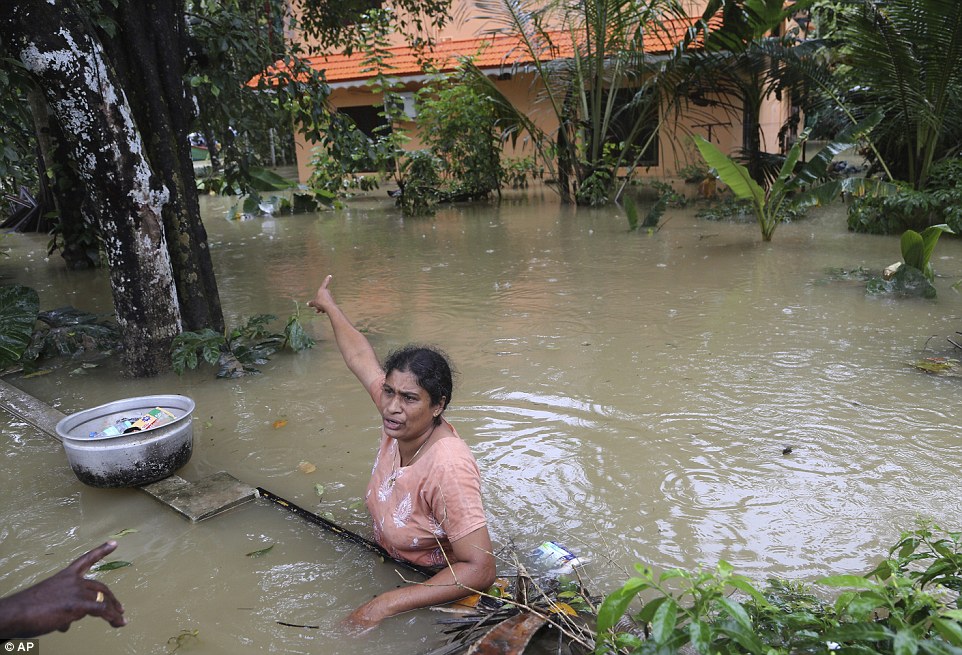 A stranded woman gestures towards her house as she asks for more essential supplies from a volunteer in a flooded area in Chengannur in the southern state of Kerala, India 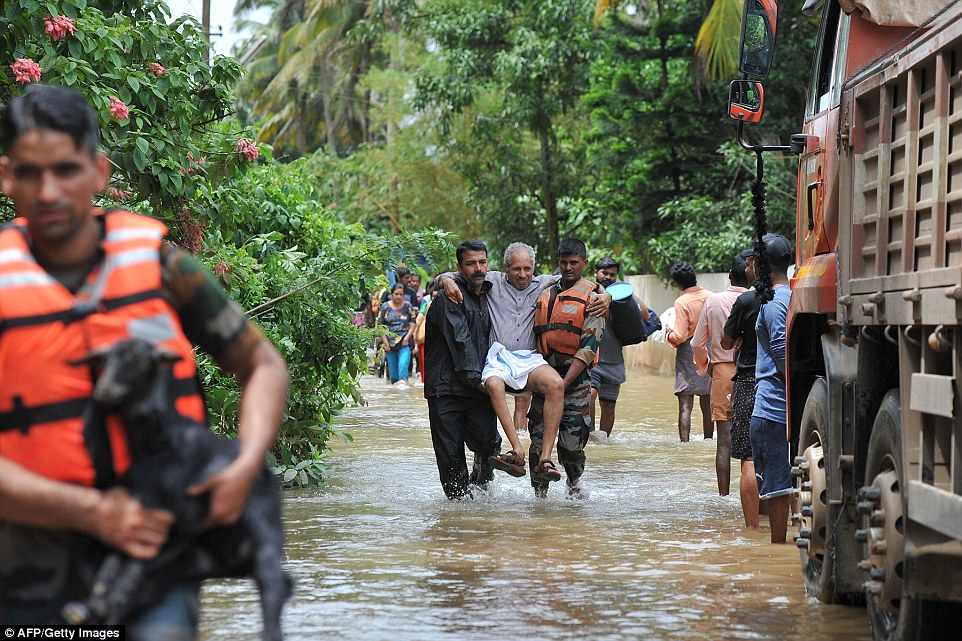 An elderly man is carried to safety by rescue workers in the southern Indian village of Mala in Thrissur, Kerala on Sunday 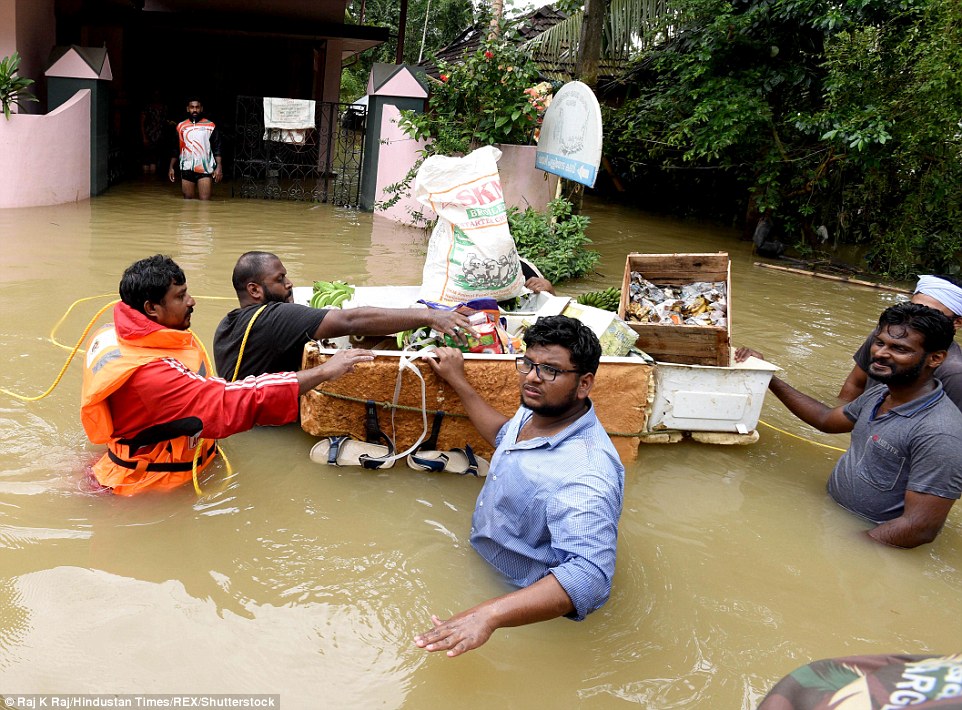 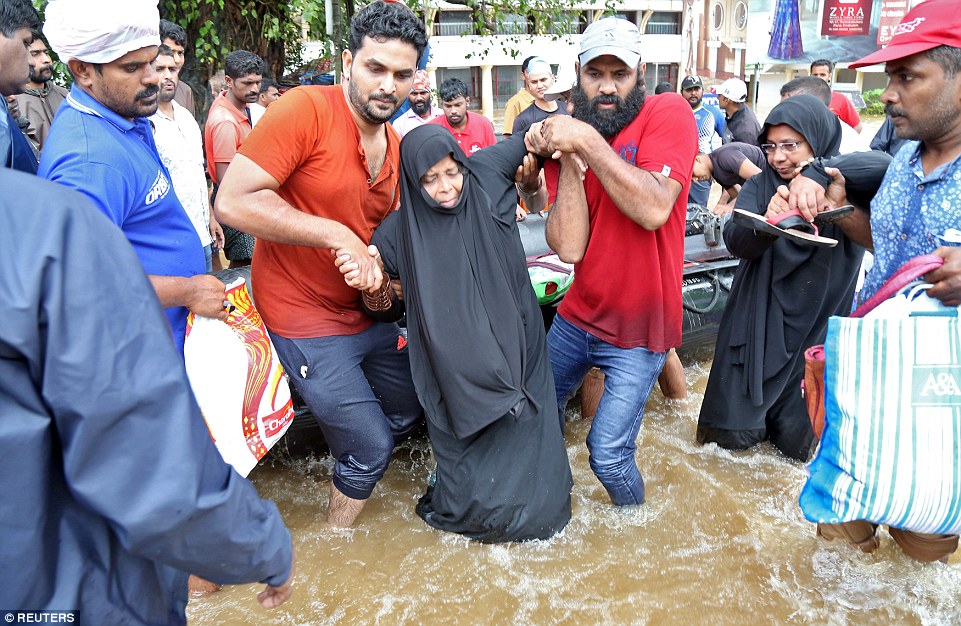 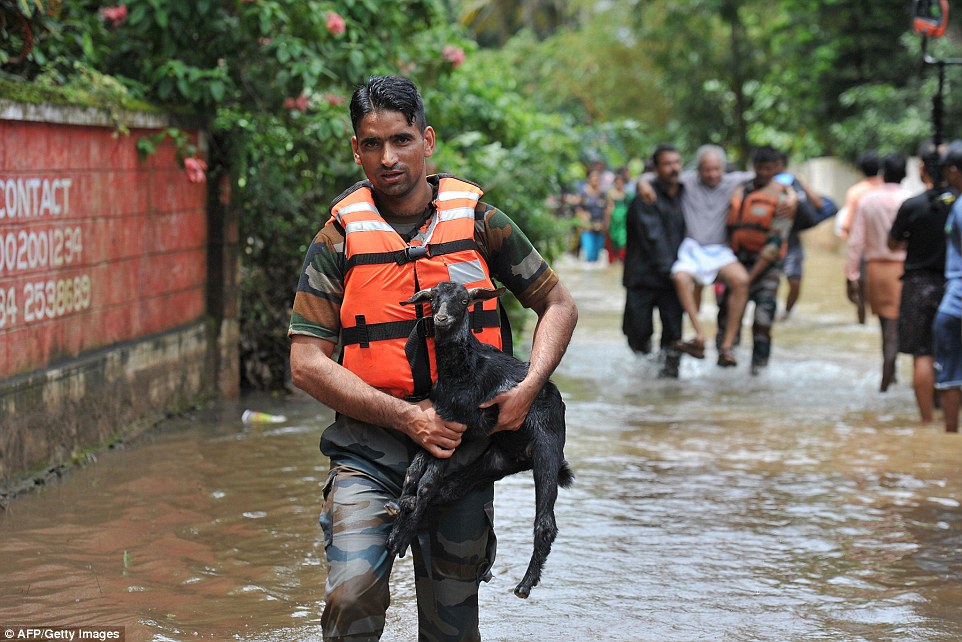 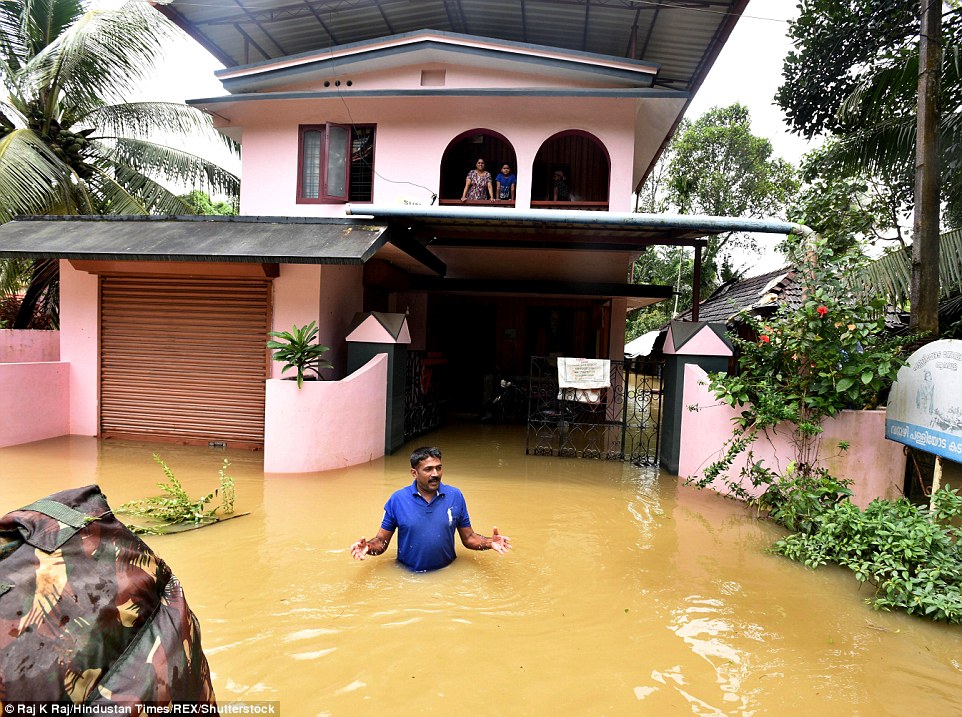 Residents wade through flood waters on the outskirts of Chengannur Taluk in Alappuzha, India

Thousands of army, navy and air force personnel have fanned out to help those stranded in remote and hilly areas. Dozens of helicopters have been dropping tonnes of food, medicine and water over areas cut off due to damaged roads and bridges.

In worst hit areas such as Thrissur and Chengannur, rescuers are searching inundated houses where they have found the bodies of those trapped by the fast rising floodwaters.

‘They didn’t think that it would rise this high – 10 to 15 feet at some places – when the initial warnings were issued,’ said Ashraf Ali K.M, who is leading the search in the small town of Mala in Thrissur. 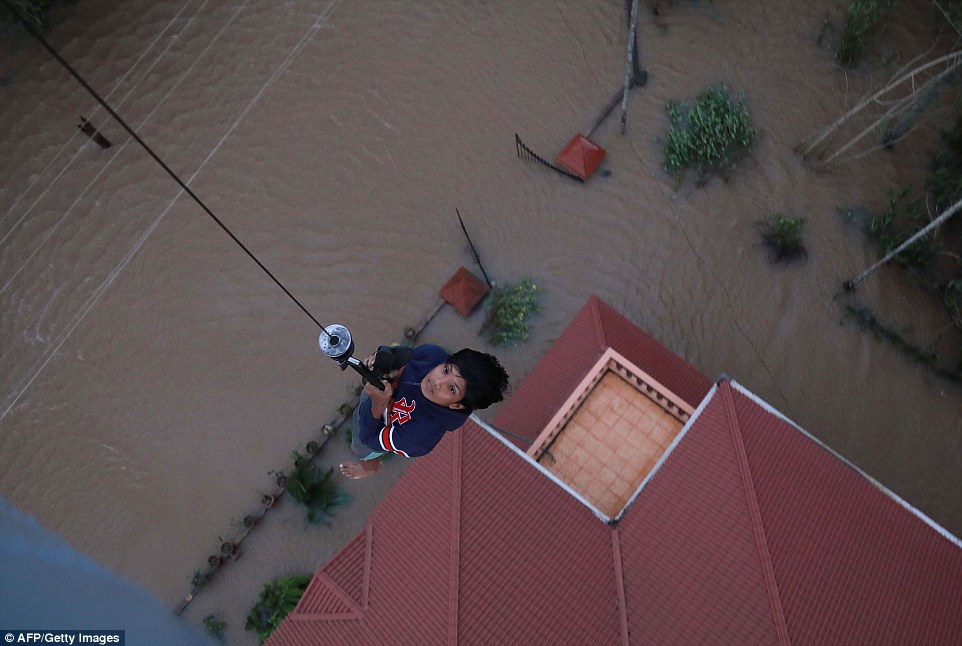 A young person is airlifted by Navy personnel during a rescue operation at a flooded area in Paravoor near Kochi, in the Indian state of Kerala 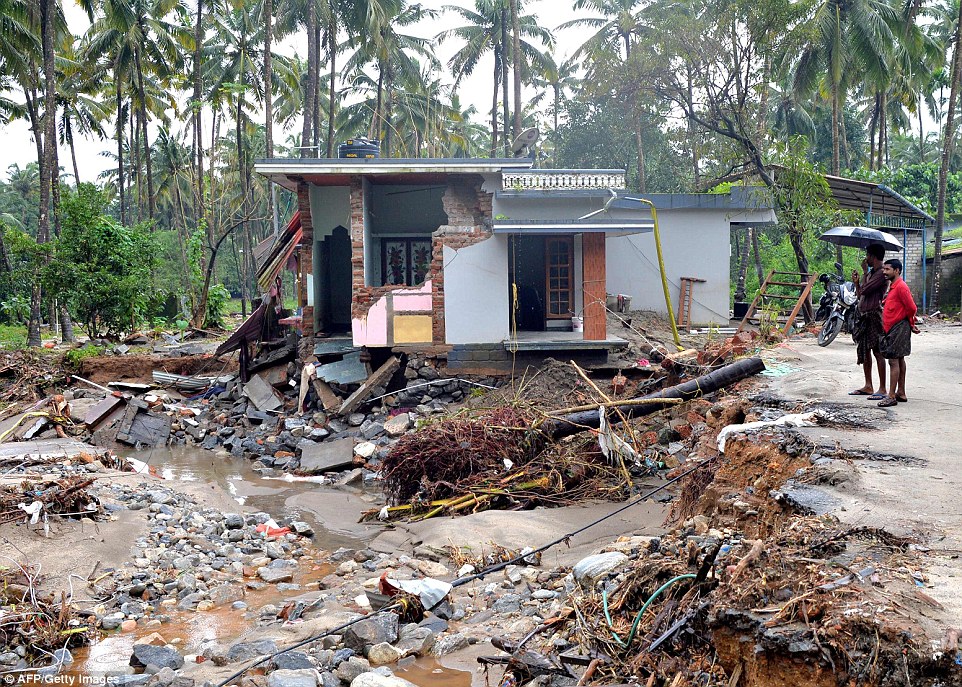 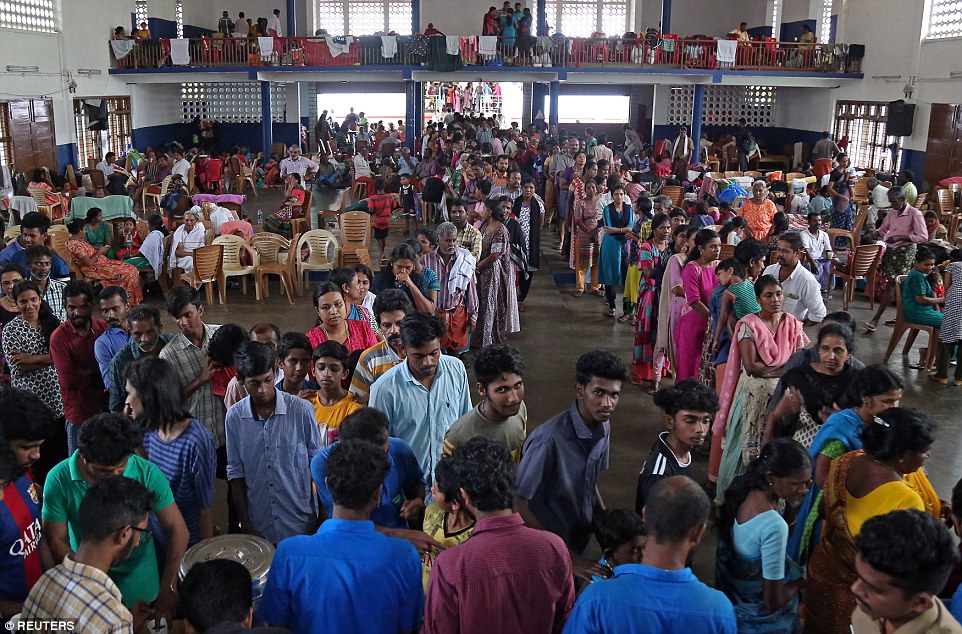 Hundreds of rescued flood victims wait to receive food in a college auditorium in the city of Kochi, southern India 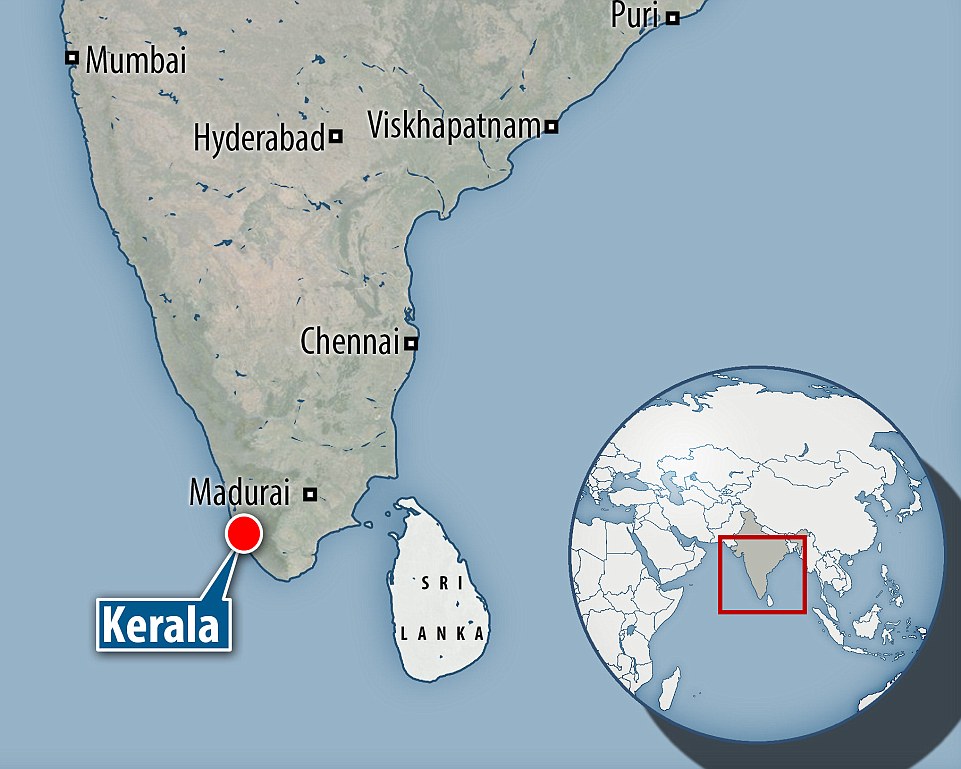 Fishermen have sailed inland from Kerala’s coast to join the search, as volunteers set up soup kitchens and an international appeal was made for financial help.

Vijayan praised the fishermen for joining the rescue mission.

The state government said each boat would get 3,000 rupees ($43) for each day of their work and that authorities would pay for any damage to them.

The floods have caused an estimated $3 billion in damage but the bill is likely to rise as the scale of devastation becomes clearer.