Body camera footage released Wednesday shows Andre Hill, a 47-year-old black man, emerging from a garage and holding up a cellphone in his left hand seconds before he is fatally shot by a Columbus police officer.

About six seconds pass between the time Hill is visible in the video and when the officer fires his weapon in the early hours of Tuesday morning in the city’s northwest side. Two cops were responding to a non-emergency disturbance call in the area.

There is no audio because the officer hadn’t activated the body camera; an automatic ‘look back’ feature captured the shooting without audio.

Without audio, it’s unclear whether the officer, identified as Adam Coy, yelled any commands at Hill, whose right hand isn’t visible in the video. 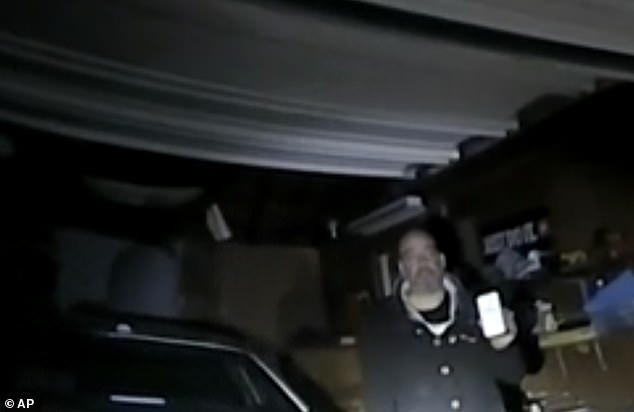 Body camera footage released Wednesday shows Andre Hill, a 47-year-old black man, emerging from a garage and holding up a cellphone in his left hand

Authorities say no weapon was recovered from the scene. The city says Hill was visiting someone at the time.

Hill lay on the garage floor for several minutes without any officer on the scene coming to his aid. That violates policy requiring officers to help the injured, said Columbus Mayor Andrew Ginther on Wednesday, calling for Coy to be fired as a result.

Columbus police values, including integrity, compassion and accountability, ‘were absent and not on display while Mr. Hill lay dying,’ said Ginther, a Democrat. 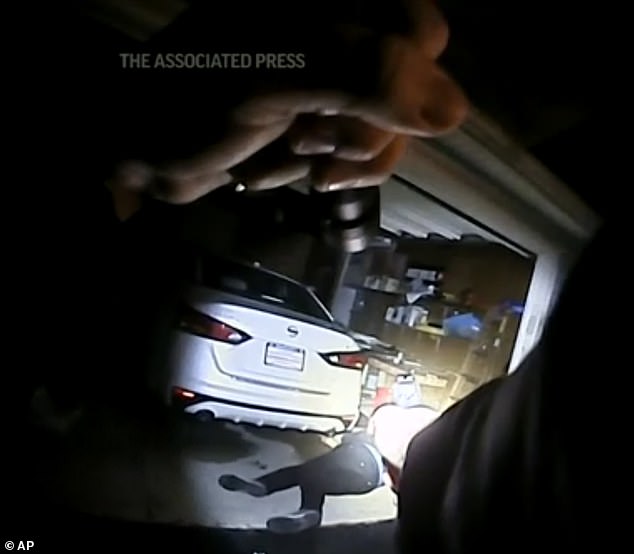 There is no audio because officer Adam Coy hadn’t activated the body camera; an automatic ‘look back’ feature captured the shooting without audio. Pictured: Bodycam footage shows Andre Hill lying on the ground after being shot by police

Columbus police officers responded to a noise complaint from a neighbor in the 1000 block of Oberlin Drive in northwest Columbus at 1:37 a.m. Tuesday morning, according to a release from Columbus Police.

The neighbor had reported a man sitting in an SUV repeatedly turning the car on and off. Two officers arrived on the scene to find a garage door open and a man inside, authorities said.

The man walked toward the police officers with his cellphone in his left hand and his right hand in his pocket.

At this point, Coy opened fire on the man striking him.

After Coy activates the audio, he is heard using an expletive as he yells at Hill, now lying on the garage floor, to put his ‘hands off to the side! Hands out to the side now!’

A few seconds later, Coy yells at Hill, ‘Roll to your stomach now,’ and then: ‘Get your hand up from underneath you, now!’

Coy then asks a dispatcher, ‘We got a medic coming’ and yells, ‘Don’t move, dude!’ to Hill as he lies on his side groaning.

Hill died less than an hour later at a Riverside Hospital at 2:25 a.m. 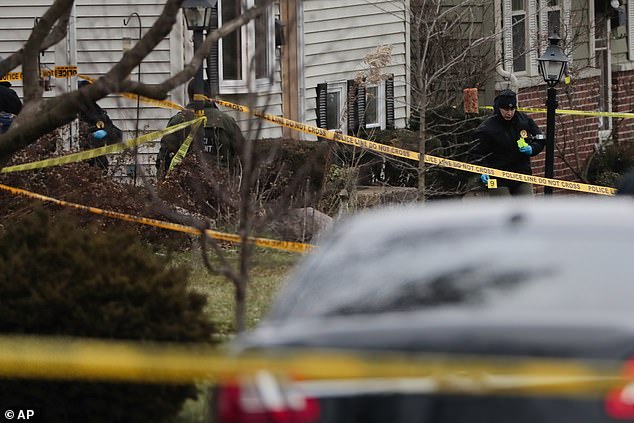 Columbus police officers responded to a noise complaint from a neighbor in the 1000 block of Oberlin Drive in northwest Columbus at 1:37 a.m. Tuesday morning. Pictured: The crime scene where Hill, 47, was shot dead by the Ohio police officer 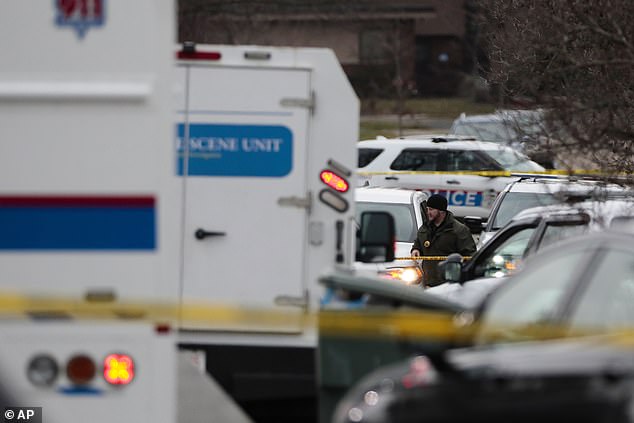 The neighbor had reported a man sitting in an SUV repeatedly turning the car on and off. Two officers arrived on the scene to find a garage door open and a man inside, authorities said

Ginther and Police Chief Thomas Quinlan have expressed anger that Coy did not activate his body camera beforehand. The 60-second look-back feature captured the shooting.

‘I am also very disturbed about what I don’t see next in the body-worn camera footage,’ Ginther said. ‘From what we can see, none of the officers initially at the scene provide medical assistance to Mr Hill.

‘No compression on the wounds to stop the bleeding. No attempts at CPR. Not even a hand on the shoulder and an encouraging word that medics were en route.’

The shooting comes less than three weeks after another black man, Casey Goodson, Jr., was shot dead by a police officer in Columbus. 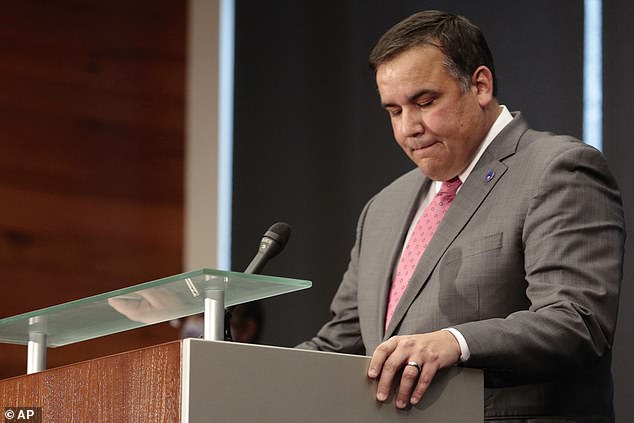 On Tuesday, the mayor tweeted: ‘This morning we learned of the killing of another Black man at the hands of law enforcement.

‘Our community is still raw and exhausted from the killings of George Floyd, Breonna Taylor and, most recently, Casey Goodson, Jr., right here in Columbus.’

‘The people of Columbus invested more than $5 million to outfit our officers with body-worn cameras,’ he said during a press conference on Tuesday.

‘Let me be clear: If you do not turn on your bodyworn camera you cannot serve and protect the people of Columbus.’

Officers must activate their body cameras as soon as they are dispatched to a major incident such as a shooting, robbery or burglary, under departmental policy.

Beyond that, officers must turn the cameras on ‘at the start of an enforcement action or at the first reasonable opportunity to do so,’ according to the policy. 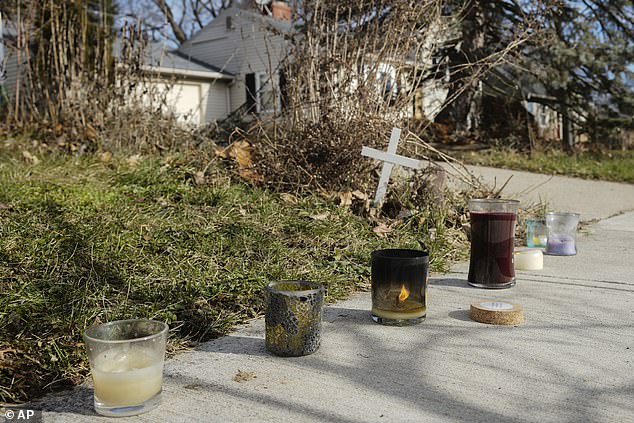 Although Coy was dispatched on a non-emergency call, the call became an enforcement action when the officer interacted with Hill because that was separate from the original call, said police department spokesperson Sgt. James Fuqua.

‘Therefore, the camera by policy should have been activated,’ he said.

Coy, a 17-year member of the force, was relieved of duty, ordered to turn in his gun and badge, and stripped of police powers pending the outcome of investigations. By union contract, the officer will still be paid.

Relieving an officer of duty is common in Columbus after a shooting.

‘In this case, the chief of police directly observed what he believes to be potential critical misconduct and is taking an intervening action of relief of duty until a disciplinary investigation can be completed,’ said Glenn McEntyre, a spokesperson for the city Department of Public Safety, which oversees the police. 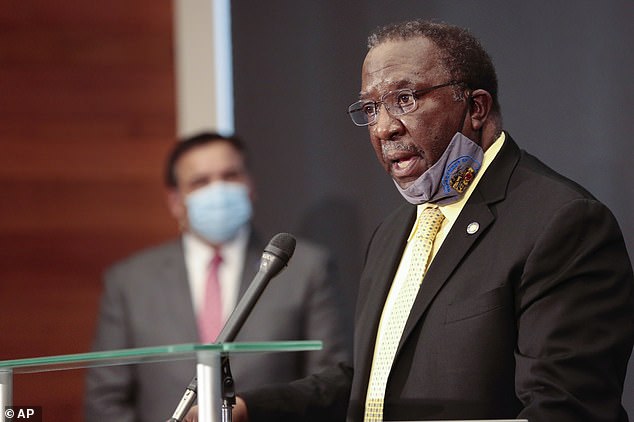 Officers had responded to a neighbor’s nonemergency call at 1.26 a.m. about a car in front of his house that had been running, then shut off, then turned back on, according to a copy of the call released Wednesday. Ginther said it’s unclear if that car had anything to do with Hill.

‘I figure if it’s company for the neighbors, they wouldn’t be out there running it for that long period of time,’ the man tells the police dispatcher.

‘I mean, I’d go out there, but I don´t want to get in trouble. I don’t have a gun,’ he said, laughing. ‘My wife’s really concerned about it.’

A man who answered the phone at the caller’s house Wednesday wouldn’t identify himself and refused to take a message.

Because the call was not an emergency, the cruiser dash cam wasn’t activated. 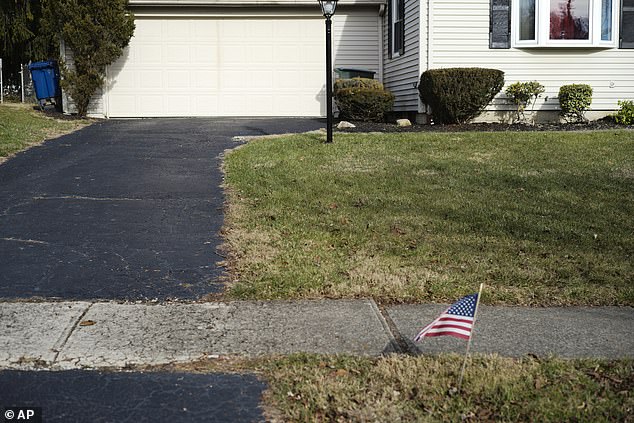 Police Chief Thomas Quinlan described the fatal shooting as ‘a tragedy on many levels’ and promised to ‘provide as much transparency as possible’.

‘Our community deserves the facts. If evidence determines that laws or policies were violated, officers will be held accountable,’ he said in a statement.

The state Bureau of Criminal Investigation, which falls under the attorney general’s office, conducts probes of Columbus police shootings under an arrangement with the city.

‘What we have now is an incomplete record. We must allow the record to be completed and the evidence to be gathered,’ Yost said. ‘Only the truth – the whole truth and nothing else – will result in justice.’ 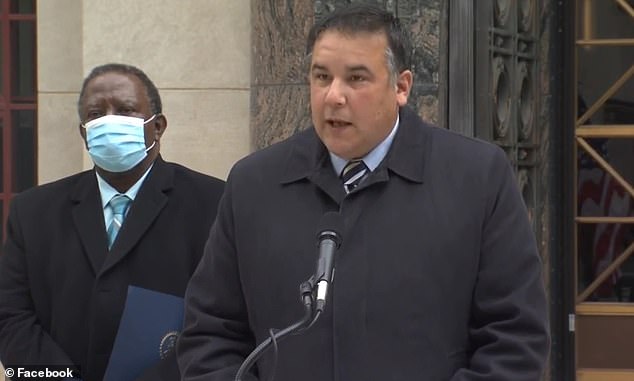 Columbus Mayor Andrew Ginther  said neither of the officers on the scene activated their bodyworn cameras until after the shooting, that they were delayed in giving the 47-year-old first aid after he was shot and that no weapon was found at the scene

The U.S. attorney’s office in Columbus has agreed to review the case for possible federal civil rights violations once the state completes its investigation.

A review of Coy’s personnel file shows more than three dozen complaints have been filed against him since he joined the department in January 2002, mostly for rude or abusive language with a dozen for use of force.

No details about the allegations are contained in the sparse summaries the city provided from the department´s internal affairs bureau. All but a few were marked ‘unfounded’ or ‘not sustained.’

The Columbus Dispatch reported the city paid $45,000 to a man in 2012 after a dashcam video showed Coy banging the man’s head against the hood of a car during a drunken driving arrest. Coy was suspended for 160 hours, the newspaper reported. 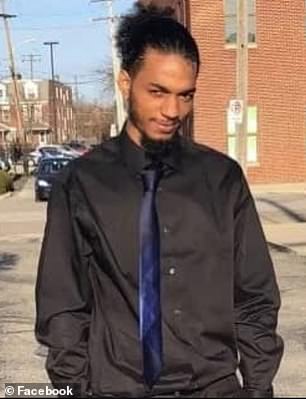 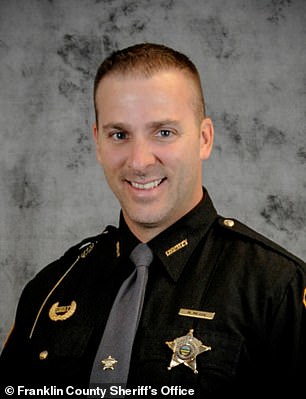 The shooting comes amid growing anger among the community in Columbus after Casey Goodson Jr, 23, was shot and shilled in December 4 in the northeast of the city.

The 23-year-old’s death sparked protests across Ohio and renewed nationwide calls for an end to systemic racism and police brutality in the wake of a string of deaths of black people in police custody this year.

US Marshal Peter Tobin says Goodson drove down the street waving a gun and that when Meade confronted him, it resulted in the shooting. 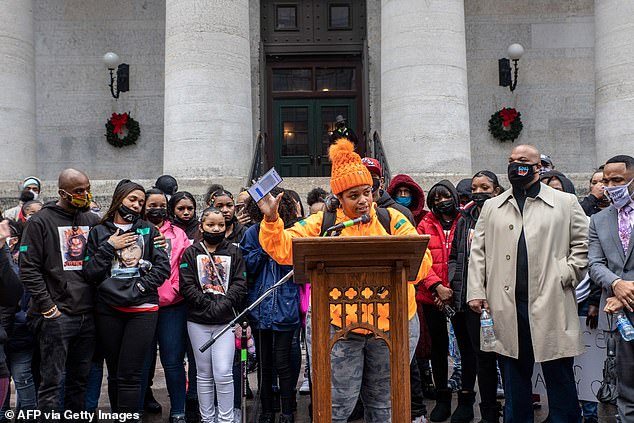 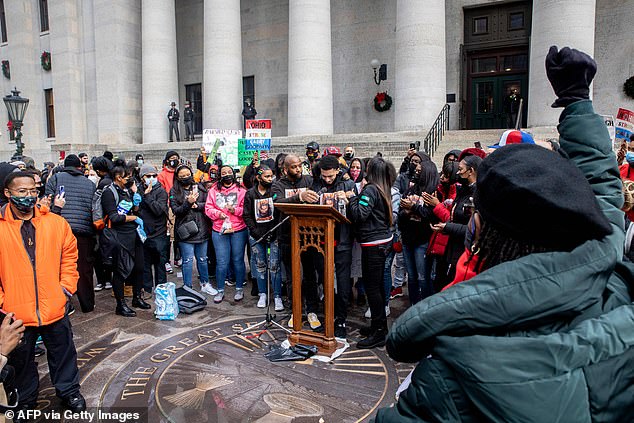 But Goodson’s family say he was ‘murdered in cold blood’ when he was returning home from the dentist’s office with Subway sandwiches for himself, his five-year-old brother and his grandmother.

They say he would never have waved a gun and was legally allowed to carry a gun as he had a concealed carry permit and Ohio is an open carry state.

Again, there is no bodycam footage from the shooting of Goodson.