Heathrow’s runway plans were boosted today as Jeremy Corbyn condemned expansion – but said his MPs were free to back it.

The Labour leadership declared that the proposals – finally signed off by Cabinet earlier this month – would damage the environment without benefiting the wider UK economy.

However, rather than face a major rebellion by backbenchers who support the project Mr Corbyn has granted a free vote. The concession should guarantee that the third runway scheme is passed by the House of Commons on Monday, as the government and the SNP are both in favour. 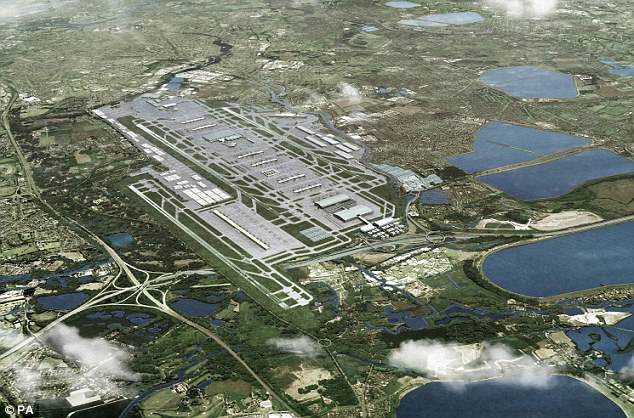 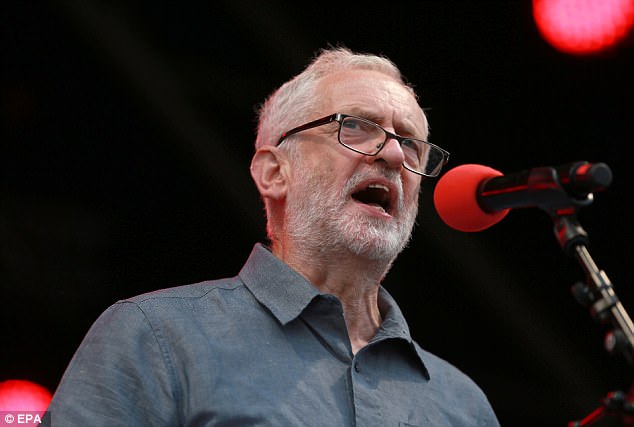 Labour has declared that the Heathrow proposals would damage the environment without benefiting the wider UK economy. But Jeremy Corbyn (pictured at the Labour Live festival on Saturday) has given MPs a free vote to avoid a rebellion

It will also ease the pressure on Boris Johnson and other senior Tories who have campaigned against expansion for many years. Conveniently, the Foreign Secretary is expected to be away on business when the vote takes place.

The were increased aviation capacity, C02 reduction, minimised noise and shared benefits across the UK, and said none had been met.

What are the alternatives to the expansion of Heathrow Airport?

Here are some of the alternatives to expanding Heathrow Airport which have been put forward:

But critics warn that not increasing UK airport capacity will harm trade.

One of the more eye-catching suggestions, Boris Johnson has suggested a floating airport built in the Thames Estuary should be built.

This would mitigate issues of noise, air pollution and space would all be mitigated.

It would also provide the chance to close Heathrow entirely – solving the problem of noisy flight paths that have plagued West London and allowing new development of the area.

Expansion of Gatwick or Stansted:

Combine Gatwick and Stansted into a super hub airport

High speed rail links could join the two airports – providing a super hub that would eliminate the need for Heathrow to be London’s main hub airport.

Regional airports elsewhere in the UK have more spare to build on. These could be expanded eliminating the need for a large hub airport.

The party said the plans do not guarantee that a third runway is deliverable, are not consistent climate change obligations and ministers have failed to set out clear targets for noise mitigation.

It also warned that claims up to 15 per cent of all new routes be reserved for the domestic market could mean as little as 1 per cent in practice.

‘After careful and rigorous consideration, we are clear that they have not been met.

‘Heathrow expansion is incompatible with our environmental and climate change obligations and cannot be achieved without unacceptable impacts on local residents.

‘The improved connectivity to the regions of the UK cannot be guaranteed and there are unanswered questions on the costs to the public purse and the deliverability of the project.

‘We support vital investment in our country’s transport infrastructure, but every investment must be tested on whether it provides real value for money and sustainability.

‘A third runway at Heathrow fails this test.’

Labour urged all parties to offer a free vote when the divisive plans go before MPs.

But Theresa May is ordering her MPs to vote in favour, and has been told she has the backing of the SNP. The nationalists have been won over by promises of extra links to Scotland.

John Stewart, chairman of anti-expansion group Hacan, welcomed Labour’s stance, and said it created ‘more uncertainty about how the vote will go’.

He added: ‘The fact that the main opposition party is not backing a third runway means greater risks for Heathrow’s financial backers who are ploughing billions into a scheme that might be pulled by a future government.’

A Heathrow spokesman said: ‘We are disappointed that Labour have disregarded much of the evidence on how their four tests will be met by Heathrow expansion.

‘The independent Airports Commission – after its 2.5 year, £20 million study – found Heathrow’s plans for a north-west runway deliver on all fronts including carbon, noise, air quality and nationwide benefits.

‘Despite the decision, we retain the support of trade unions and many backbench Labour MPs and will continue to engage constructively with the Labour Transport Team as we deliver a lasting legacy for future generations, fulfilling our commitments to the economy and the environment.’ 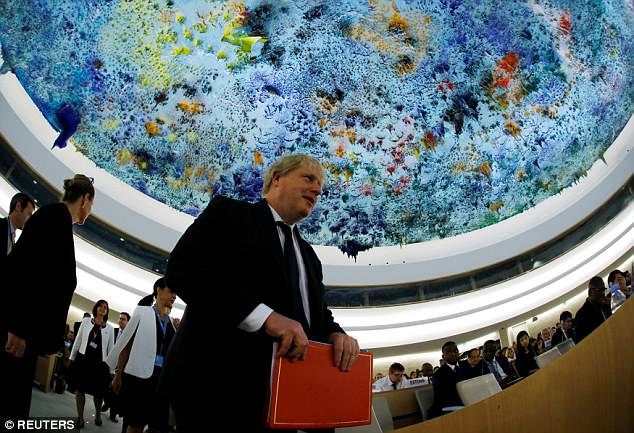 Boris Johnson (pictured at a UN conference in Switzerland this week) has campaigned against Heathrow expansion for many years. Conveniently, the Foreign Secretary is expected to be away on business when the vote takes place Theresa May (pictured with aides in Westminster yesterday) is ordering her MPs to vote in favour, and has been told she has the backing of the SNP