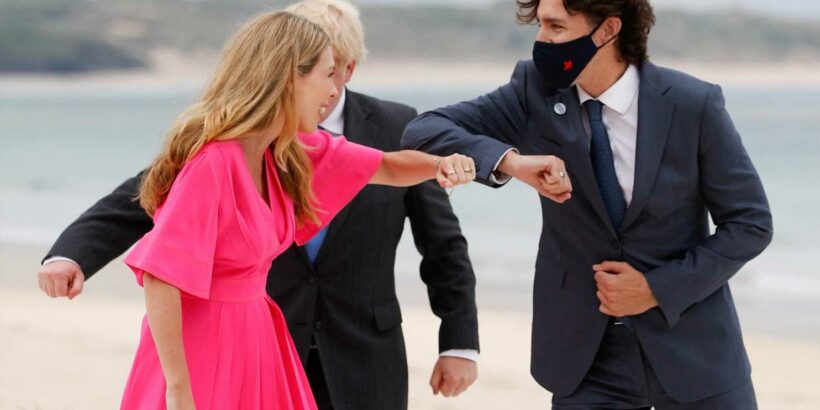 BORIS Johnson and Carrie Symonds welcomed world leaders to the G7 summit in Cornwall this afternoon – with an elbow bump on the beach.

One by one the cast of presidents and prime ministers swept down a boardwalk onto the sands of Carbis Bay with their partners to meet the host couple, with Jill Biden joking: "It's like a wedding!" 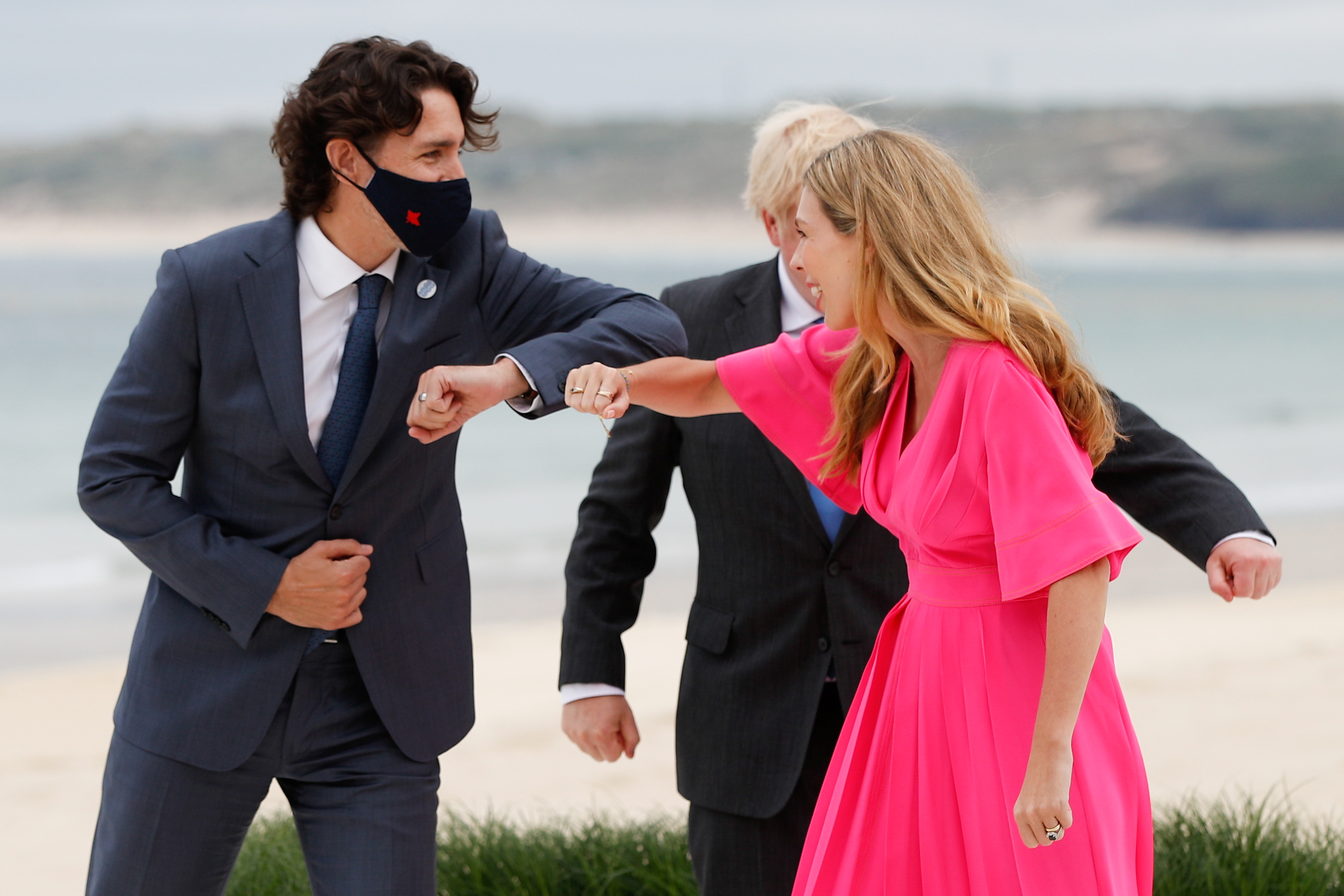 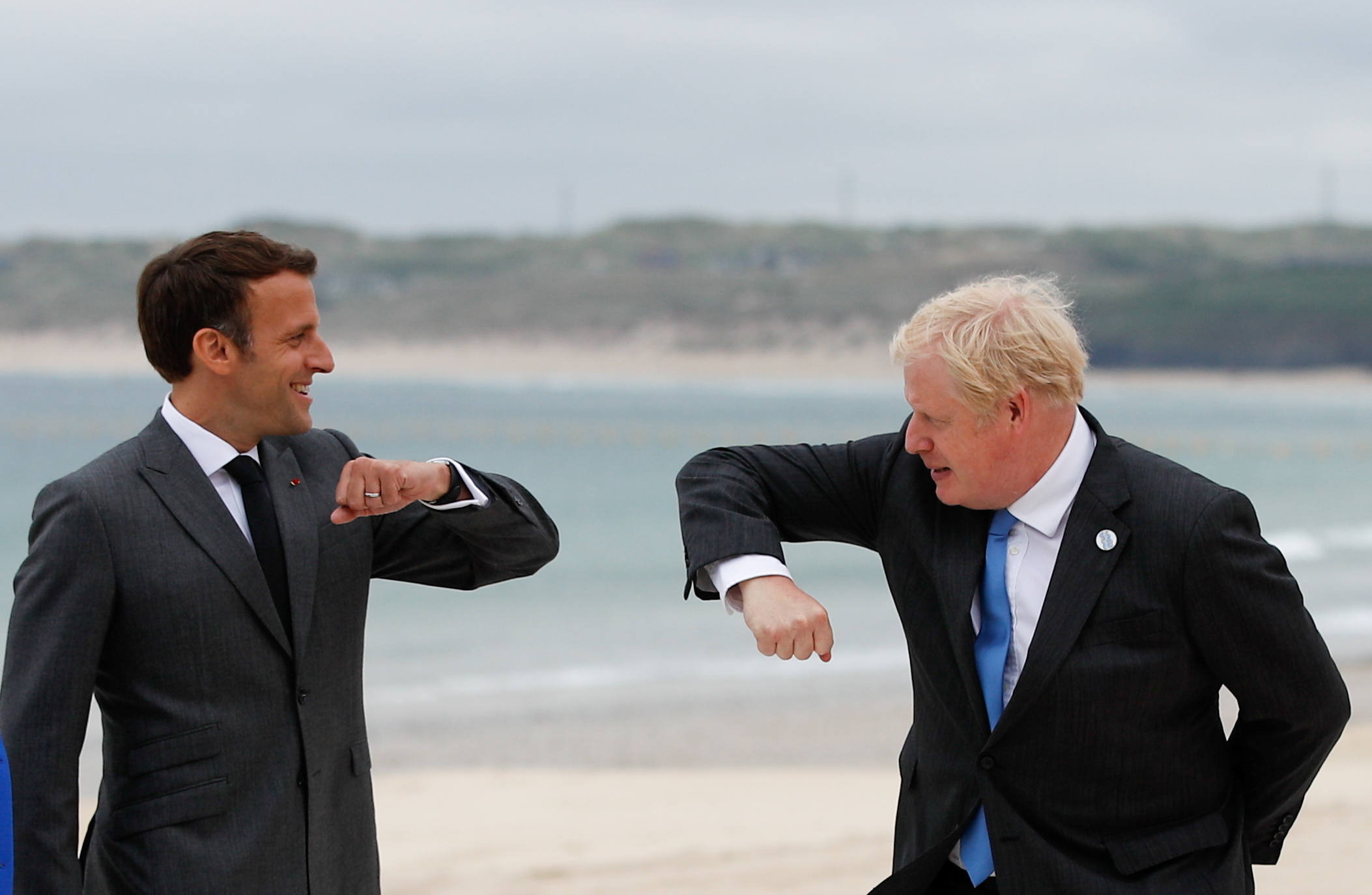 Beaming Mr Johnson stood centre stage beside Joe Biden and Emmanuel Macron as the group posed for their traditional – but socially distanced – "family photo" for the first time in two years.

World leaders have converged on Cornwall for three days of crunch talks where they will draw up plans to fight coronavirus, climate change and global poverty.

For his most important outing on the world stage since becoming PM, he wore a charcoal suit and light blue tie – but his trademark blonde mop was buffeted by a strong sea breeze as he stood on the beach.

Carrie wore a hot pink mid-length dress from Roksanda, a female London based designer, along with LK Bennett shoes.

After striding down a light wooden boardwalk with her husband, First Lady Biden joked: “I feel like we are at a wedding”.

Later Boris Johnson – who tied the knot less than a fortnight ago – remarked that it was like “walking down the aisle.” 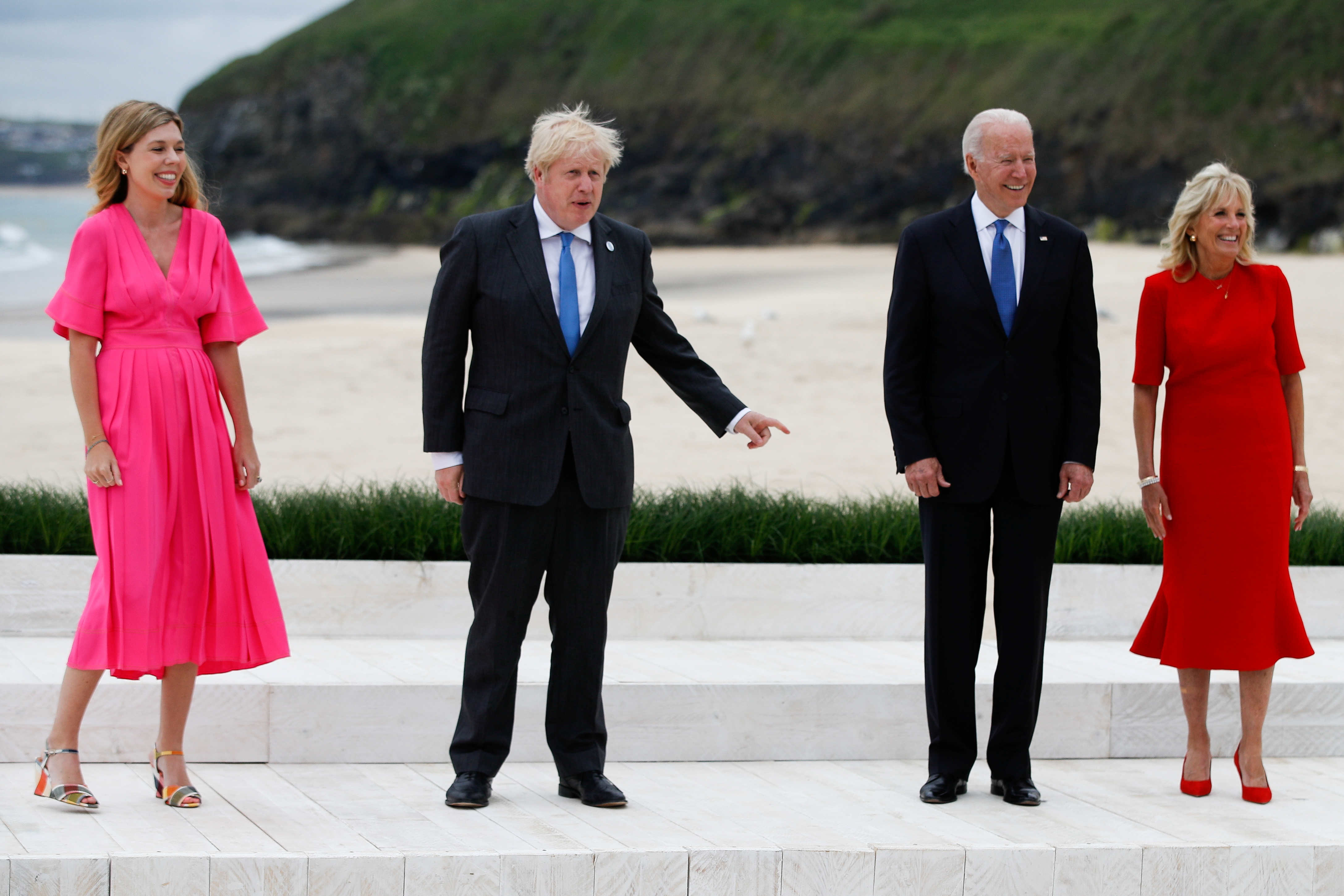 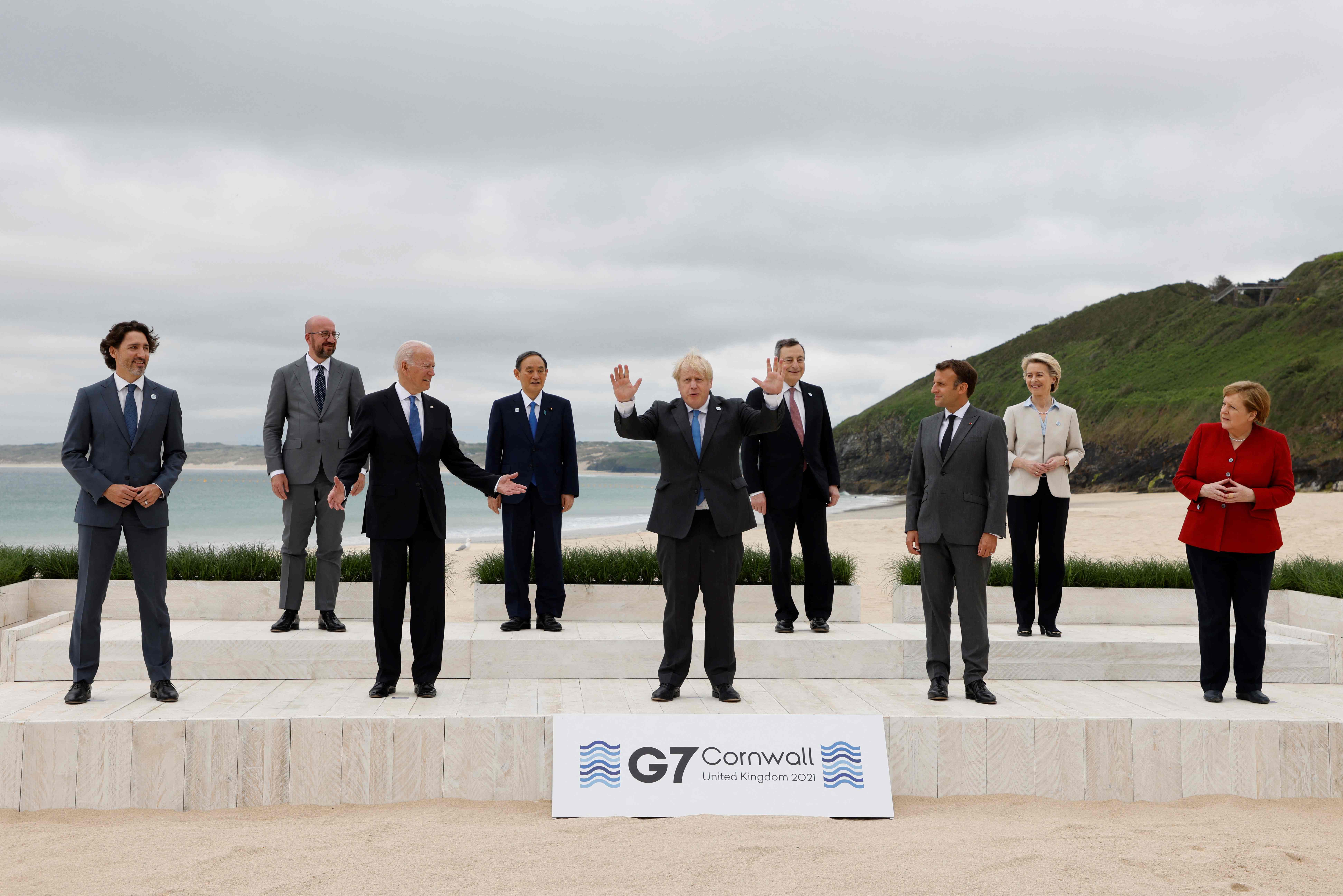 President Biden urged assembled media to go swimming, quipping “everyone in the water”.

Reporters asked him what his message would be to Vladimir Putin, who he is meeting next week, and he replied “I’ll tell you after I have delivered it.”

It turned out Carrie had spotted Canadian Prime Minister Justin Trudeau swimming in the sea earlier this morning.

Johnson had also gone for a tip in the bracing water off the Cornish coast at dawn.

After the family photo of leaders, German Chancellor Angela Merkel urged Mr Johnson ahead, telling him “you are the leader”.

But as Mr Johnson pressed ahead, President Macron took the opportunity to throw his arm around President Biden’s shoulders and begin an animated discussion. His remarks were inaudible. 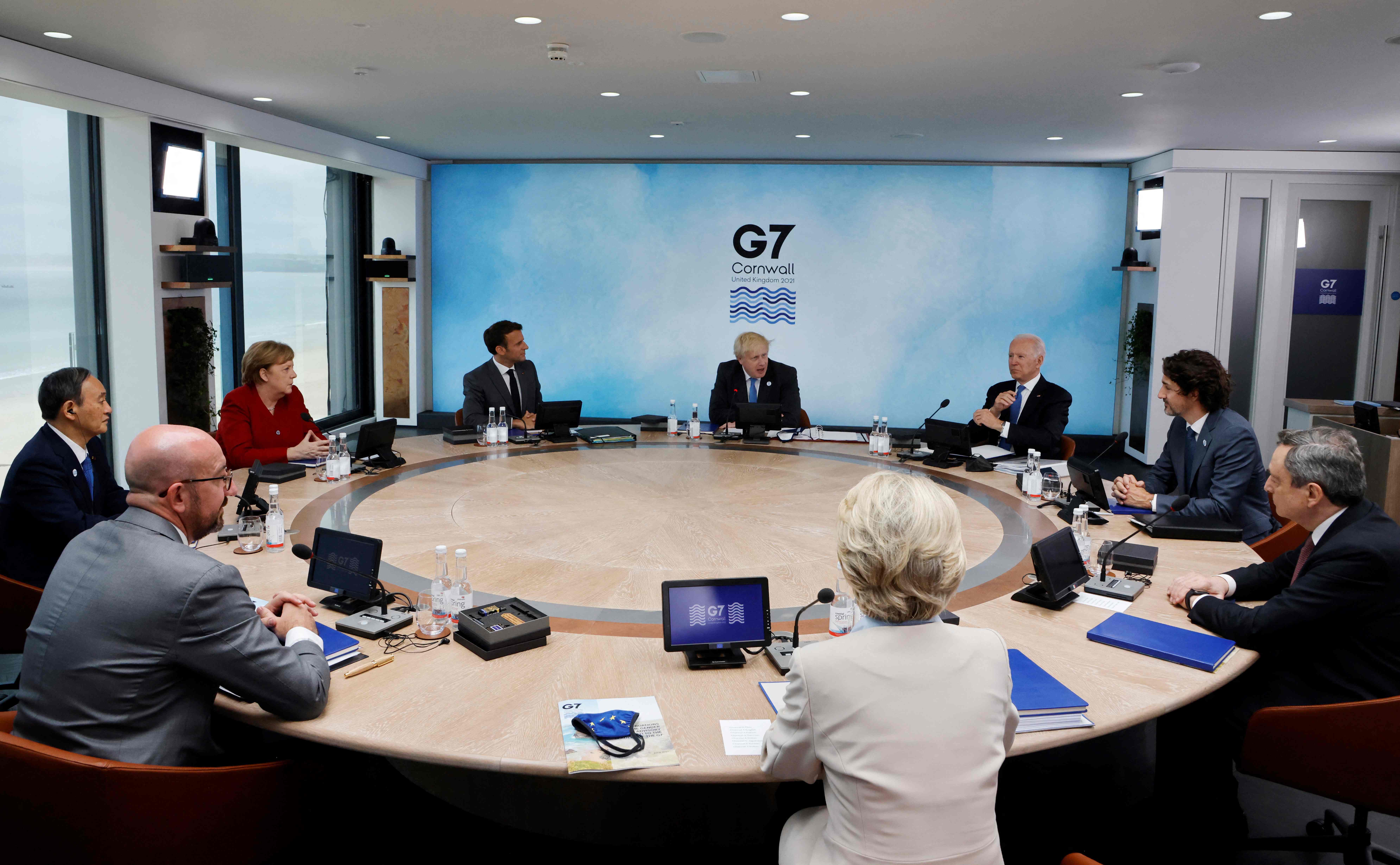 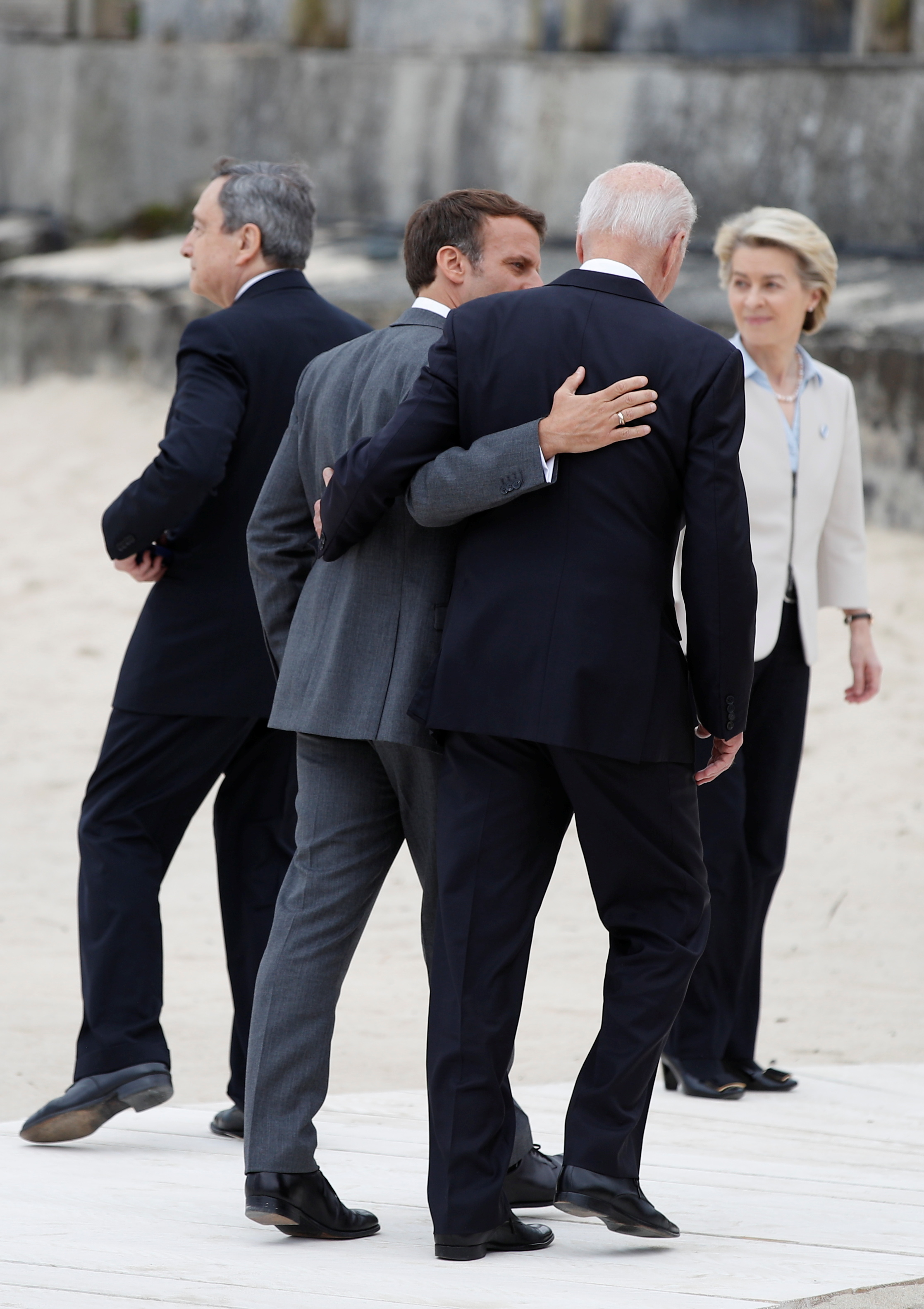 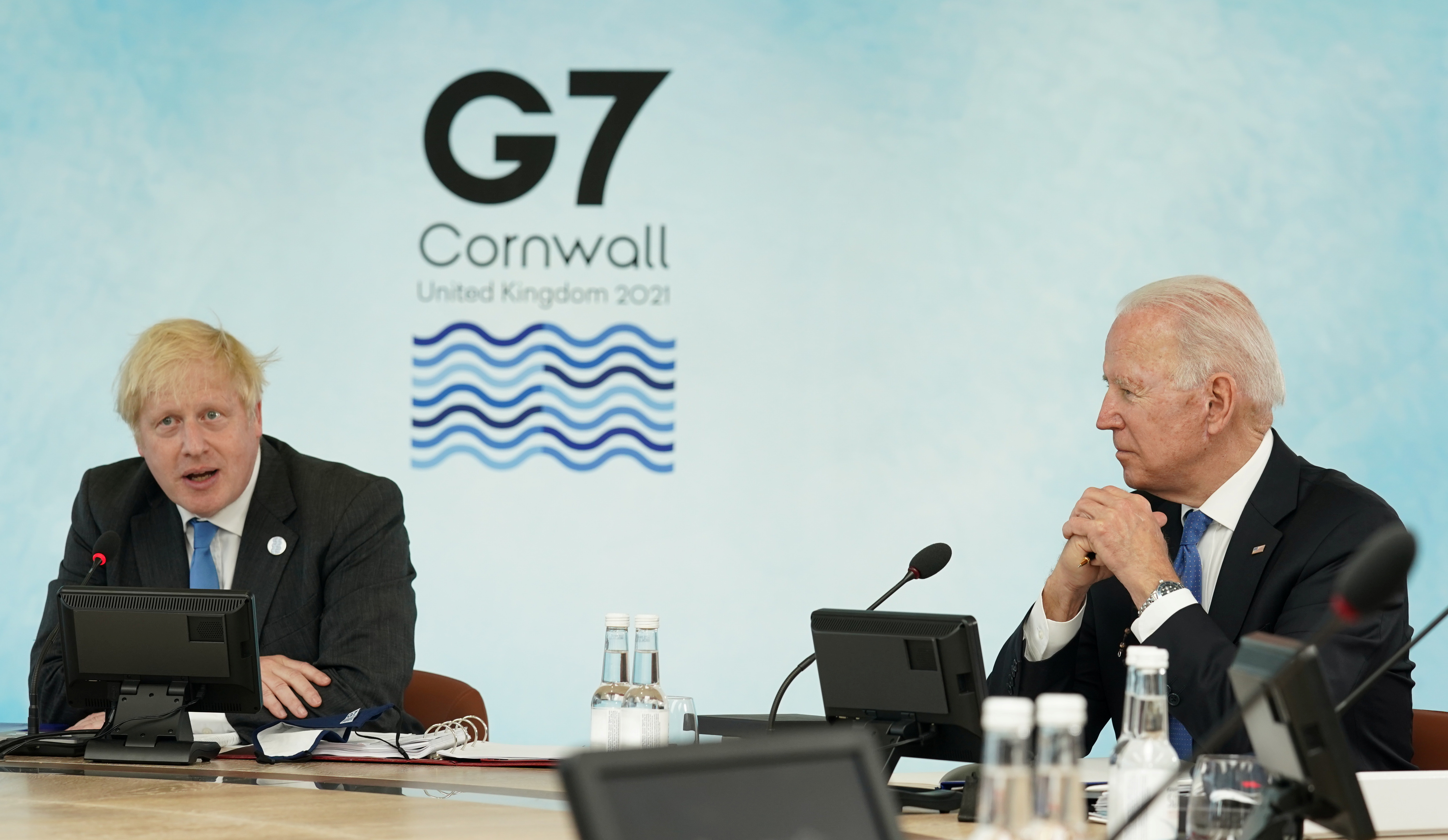 The national leaders – as well as EU chiefs Ursula von der Leyen and Charles Michel – then sat around a locally-crafted table at the Carbis Bay hotel for the first round of talks.

Chairing the meeting Mr Johnson opened: "It’s genuinely wonderful to see everybody in person, I can’t say what a difference it makes."

As the G7 kicked off: 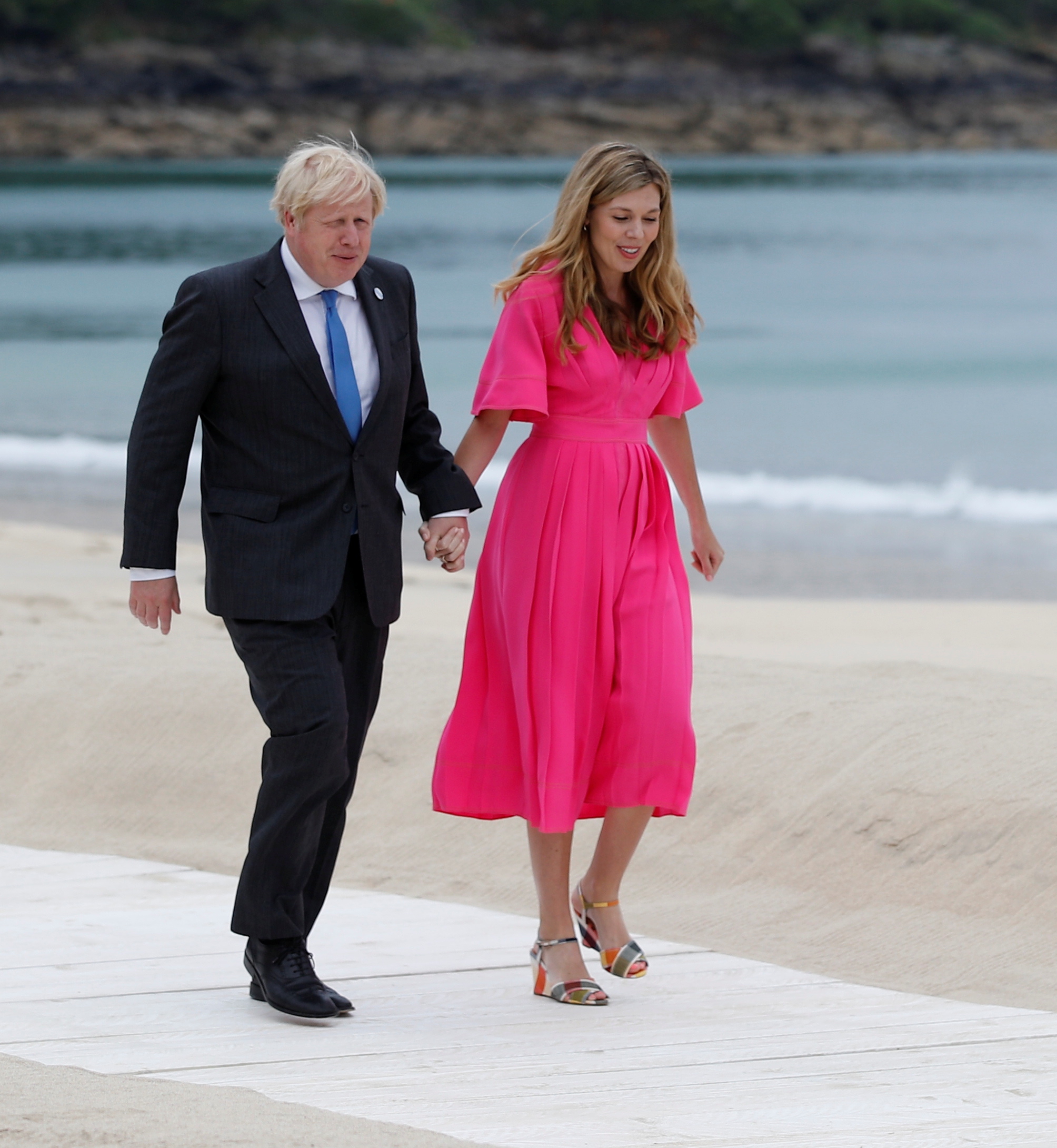 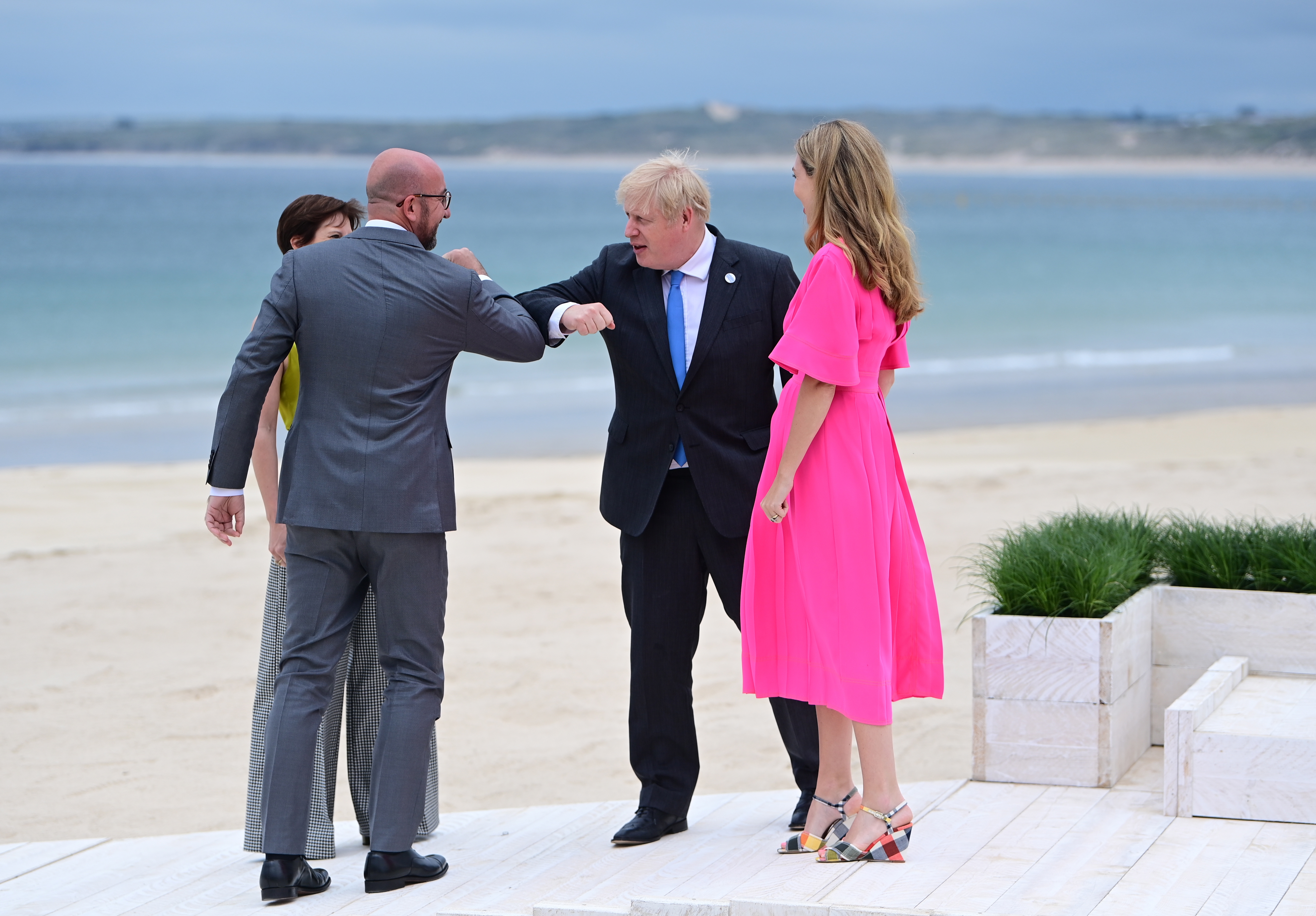 He also praised the Biden team as a "breath of fresh air", taking a swipe at Donald Trump who took a sledgehammer to diplomacy left the last G7 in carnage.

The meeting also saw Downing Street baby Wilf venture onto the world stage, going for a paddle in the sea with his mum and Jill Biden, who gave him a copy of President Biden's kids book as a gift. 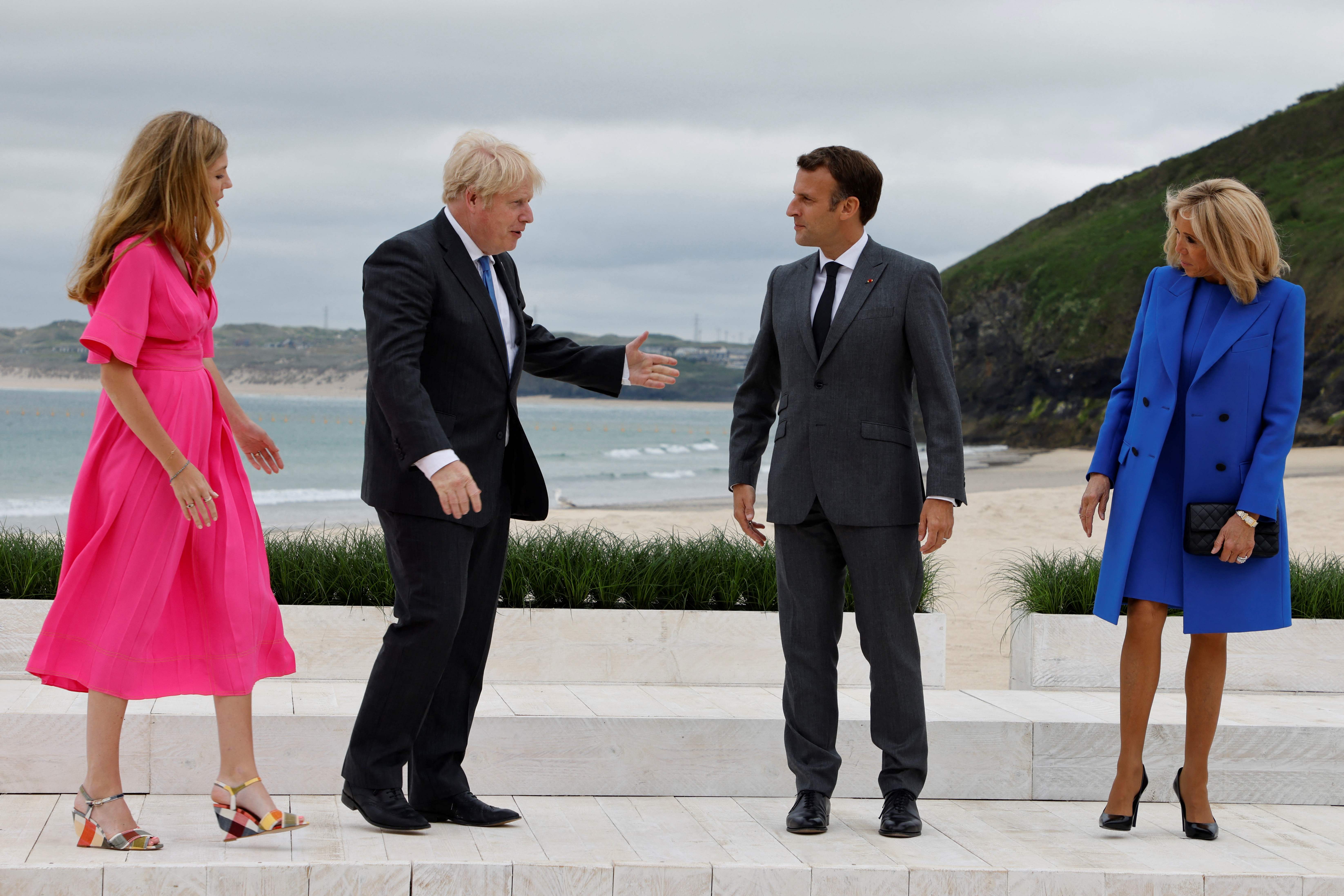 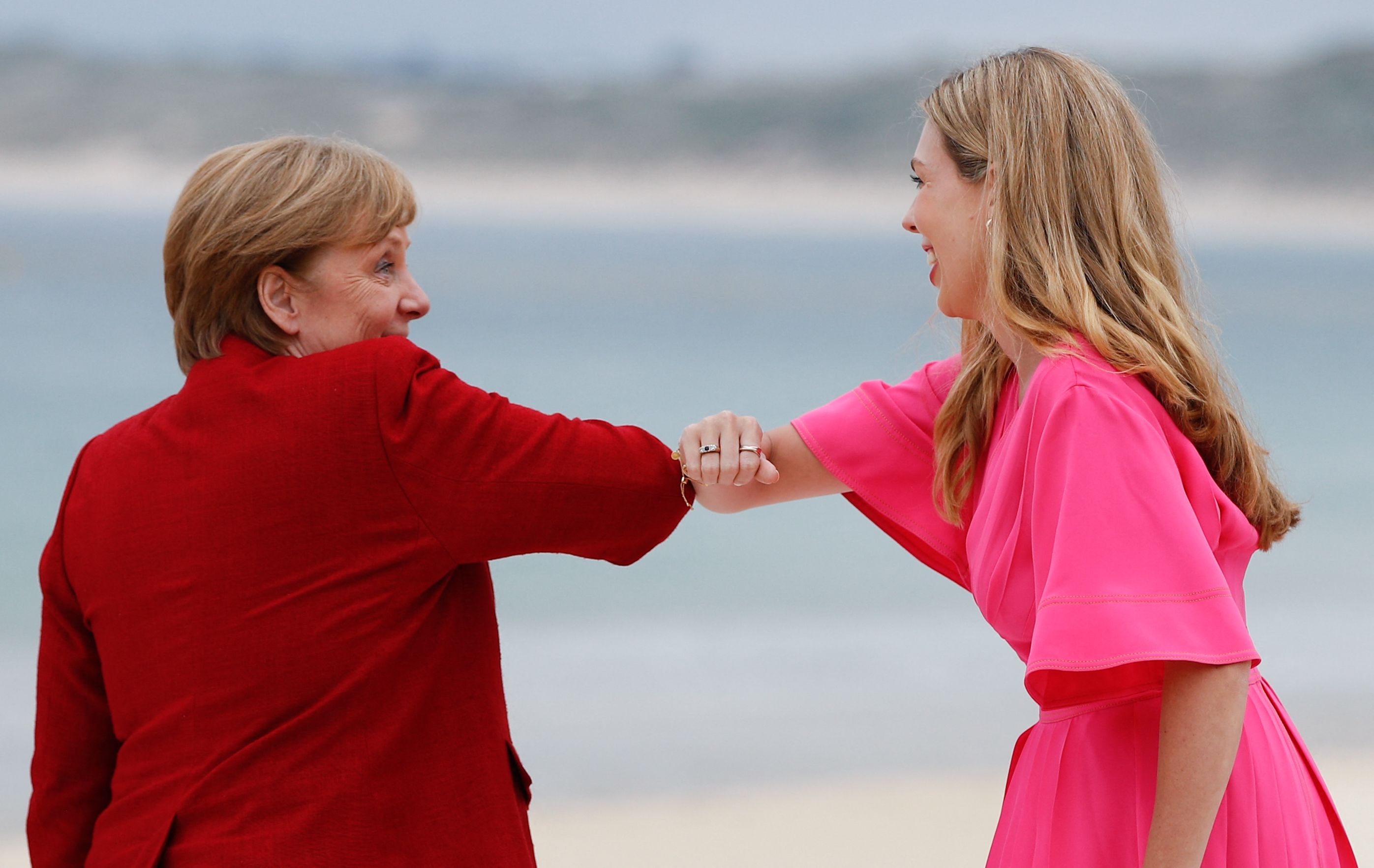 They risk hijacking the summit to collar Mr Johnson about UK threats to tear up parts of the Brexit deal to quell rising tensions in Northern Ireland.

The PM yesterday blasted that "excessively burdensome" checks on goods arriving in the province – but said the G7 was not the place hammer out a solution.

Mr Johnson instead wants to focus on "building back better" from the pandemic, unveiling his flagship pitch to "vaccinate the world" by 2022.

He has called on fellow leaders to donate a billion jabs to poorer countries – and pledged 100million from Britain.

Opening the summit, the Prime Minister said the G7 economies had the potential to "bounce back very strongly" from the crisis.

He added: "But it is vital that we don't repeat the mistake of the last great crisis, the last great economic recession of 2008 when the recovery was not uniform across all parts of society." 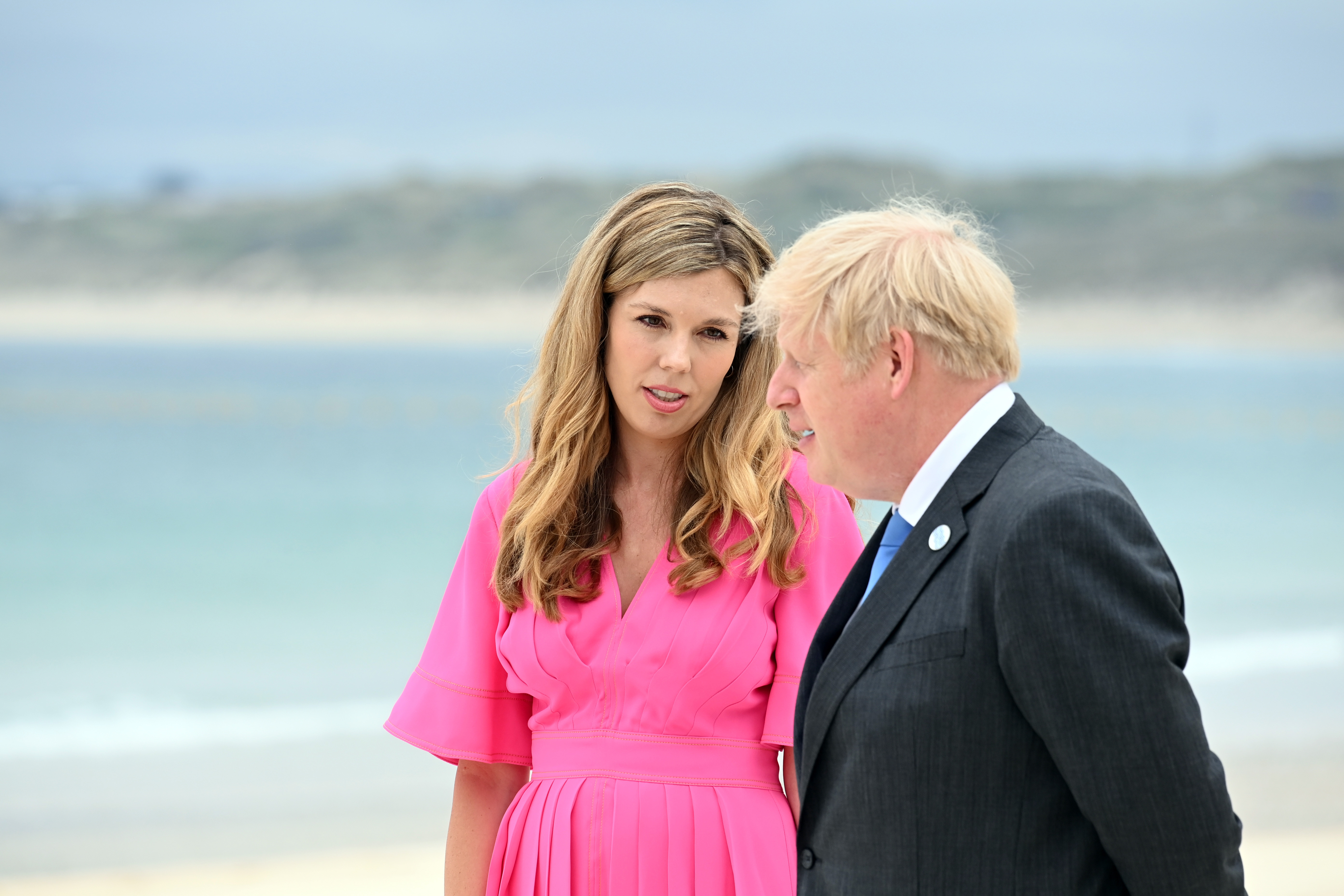 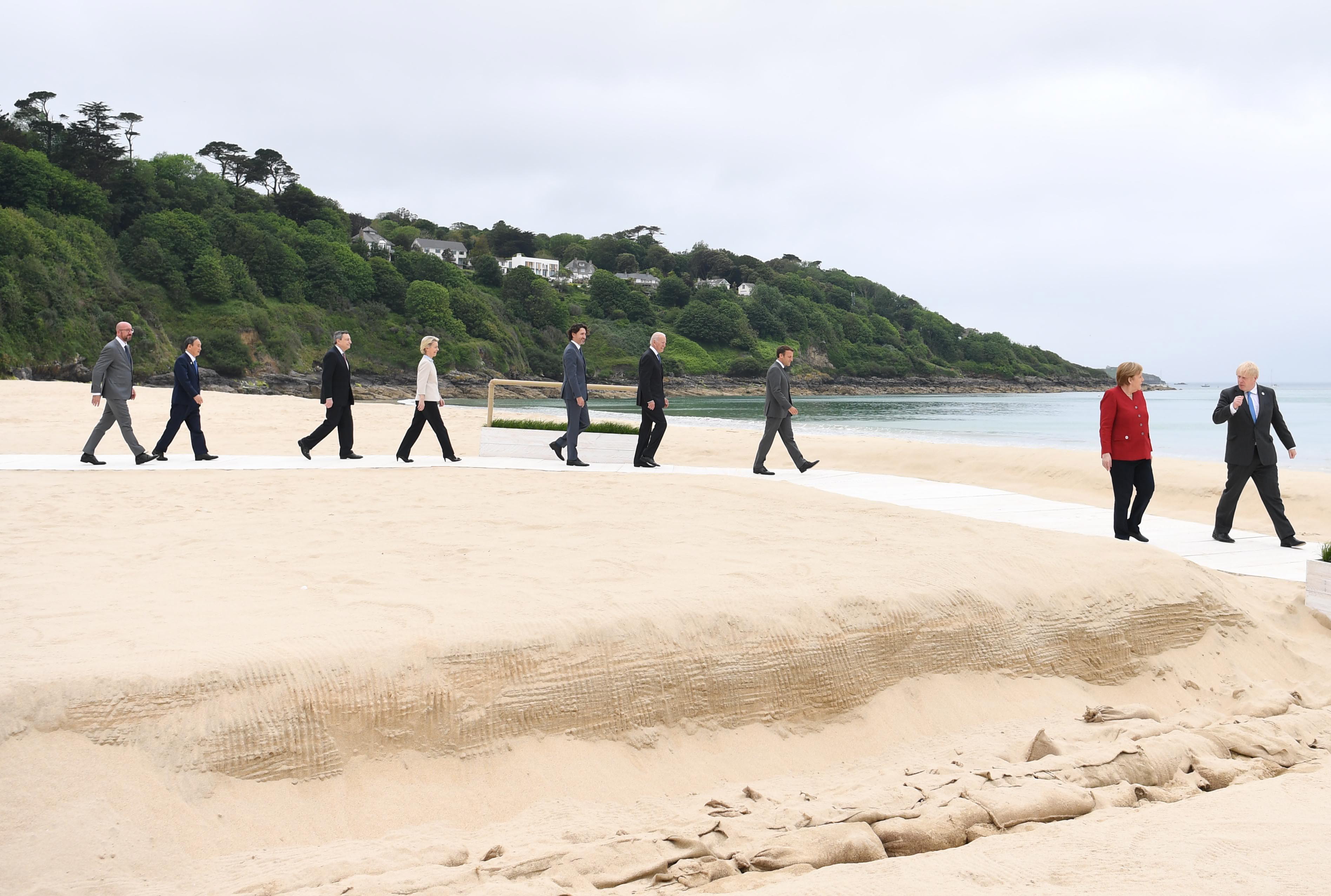 There was a risk the pandemic could leave a "lasting scar" as "inequalities may be entrenched", Mr Johnson said.

"We need to make sure that as we recover, we level up across our societies and we build back better," he added.

After an afternoon of roundtable meetings the leaders will be treated to a lavish reception with the Queen at the Eden Project.

They will be treated to locally-caught Turbot roasted on the bone with Cornish new potatoes and wild garlic pesto with greens.

Looking to read more on the Prime Minister’s life? We have you covered…