Boris’s Brexit baby boom! Prime Minister claims ‘romance will bloom across the whole nation’ once it leaves the EU but refuses to say whether he and Carrie Symonds will be among the prophesied new parents

Britain will see a surge in births  next year thanks to a Brexit baby boom, Boris Johnson claimed today.

The Prime Minister claimed that ‘romance will bloom across the whole nation’ once it leaves the European Union, leading to a surge in the birth rate.

But his remarks in the Sunday Times were questioned as he also said he correctly foresaw a baby boom ‘after the Olympics’ in 2012 – which did not take place.

In fact, the birth rate in 2013 – when babies conceived after the London games would have been born, fell by more than 34,000 year-on-year.

Mr Johnson told the paper:  ‘Cupid’s darts will fly once we get Brexit done. Romance will bloom across the whole nation.’

And he added:  ‘There was one after the Olympics, as I correctly prophesied in a speech in 2012, it was quite amazing. There was a big baby boom.’ 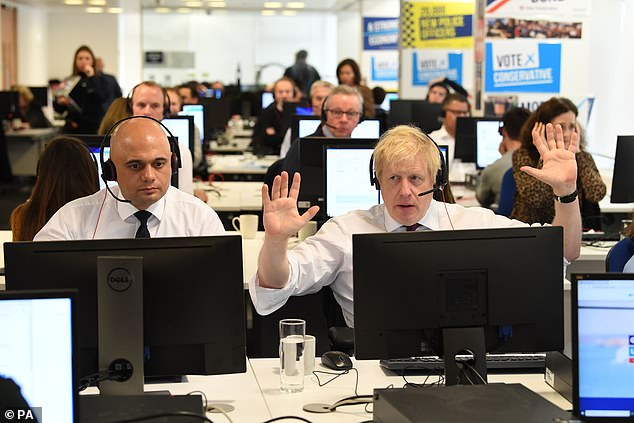 Hands free: Mr Johnson at a Conservative campaign call centre with members of the Cabinet today in London 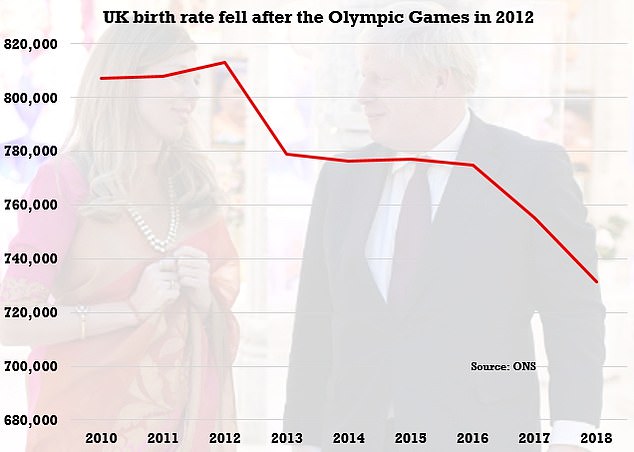 Mr Johnson appears to have been referencing a speech he made to Olympic athletes in October 2012, where he told them their exploits had so moved the nation they ‘not only inspired a generation but probably helped to create one as well’.

He repeated the line in July the following year while Mayor of London, claiming there had been a baby boom unseen since the aftermath of the World Cup in 1966.

Mr Johnson – a father of five – was noticeably more coy when asked about whether he would be one of the new post-Brexit parents.

He stepped out last night to a temple in London with partner Carrie Symonds, 31.

Asked if there would be the patter of small feet in Downing Street he said: ‘I am not going to make any demographic projections … I don’t comment about that sort of thing.’