No one could have known the moron in the stolen maroon Commodore would turn left. If he had driven through the city he probably would have been arrested without incident on the other side of town.

Instead he turned the wheel and planted his foot, ploughing into citizens in Bourke Street, killing six people and injuring a further 27. 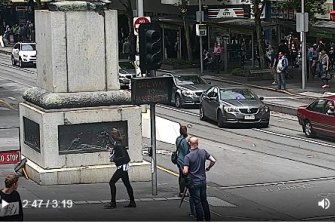 The offender on Swanston Street with police a metre behind him.

The immediate response was magnificent. People in and out of uniform ran to help the injured and the dying. The offender was taken alive – even under massive pressure police only used reasonable force.

The system failed and people died. Nothing will change that.

On Thursday, Coroner Jacqui Hawkins released her findings into the death of the six people in Bourke Street on January 20, 2017. It is a reasoned, rational and compassionate document that shows she understands the unspeakable pressure on making split-second life-and-death decisions.

She goes out of her way to point out that we are all wise in hindsight.

Her findings, critical and constructive, are made not to find scapegoats but solutions, indicating that she, unlike the police who were dealing with the offender, had time to make reasoned decisions.

She takes the unusual step of not naming the offender, a move we applaud, as she does not want to give the callous killer the sort of publicity he craves.

She says the events that led to the offender killing six people were a "perfect storm" and there was no certainty that if police had acted differently there would have been a different outcome.

"I find that the police officers involved in the events leading up to Bourke Street acted in good faith in their efforts to apprehend the offender. The evidence revealed many examples of excellent policing."

However, she finds, the police response was poor, inflexible, poorly resourced, badly communicated and underpinned by a "reluctance to act assertively for fear of recrimination".

In a document that runs to 357 pages those eight words are key.

The events of Bourke Street unravelled in minutes, but were years in the making.

For years and years a culture has seeped into policing that doing nothing is often better than acting quickly. Avoiding confrontations lessens the chance of injuries to police, the public and offenders. Time is your friend and don't act in haste.

Rightly or wrongly, many middle managers feel they are likely to be criticised by their supervisors for taking assertive action and as a result they won't put their heads over the parapet.

Often it is more about protecting your arse than the public.

Coroner Hawkins says police were not assertive enough to intercept the offender before the Bourke Street carnage and yet another coroner, many years earlier, criticised police for being too brave.

After a spate of fatal police shootings, Coroner Hal Hallenstein held a "super-inquest" into seven deaths and criticised the police "culture of bravery", whereby they felt compelled to charge in with little planning.

He found police often made the situation worse by confronting the offender, sometimes with fatal consequences.

As a result, in 1994 police changed tactics to cordon and contain where safety was the first priority.

Police have also been criticised at inquests for the consequences of high-speed pursuits. In 2014 Coroner John Ollie found: "Having considered a range of material and evidence on this matter … I cannot conceive of many situations where a police pursuit would be justified, as the risks are too high to members of the community."

When the SOG stopped an armed killer in South Melbourne and shot him dead, a Coroner raised the possibility they should be charged with murder – they weren’t.

Before Thursday's findings but after the Bourke Street tragedy, there has been much soul searching at the top and another change of tactics.

Street police will be encouraged to make hard decisions. Cops can ram offenders' cars if they are a risk to the public. (Just a few years earlier a policeman was charged for doing exactly that).

They are expected to take immediate action if they come upon an armed siege and take assertive action when the public is at risk.

Chief Commissioner Shane Patton has been telling the public, his senior officers and the troops on the ground that doing something is better than doing nothing.

He says, as long as the decisions are reasonable, he will back those on the streets.

The victims of Bourke Street deserve nothing less.