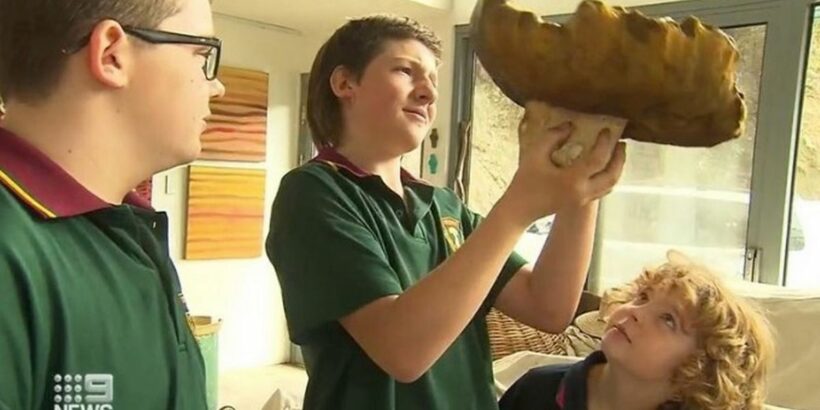 A boy has been showing off his mammoth mushroom discovery which he hopes will go down as a world record.

Jasper Les, 14, was walking home from school in the Adelaide Hills of South Australia when he spotted a giant porcini mushroom under an oak tree.

The teenager and his pal Ethan were so excited by the fungi that they dug it up and took it home to be weighed on Wednesday (May 25).

Jasper's mum Melanie Les has confirmed the edible find is heavier than a brick.

She said: "They came in and said 'check this out' so I ran down and saw it. I just couldn't believe it.

"I was just amazed. I've never seen one that big or even close to being that big."

Jasper claims he knew it was safe to handle and even good enough to cook with thanks to teachings from his Polish grandparents.

Too big to eat by himself, the lad hopes to sell the mushroom which he believes will stretch to topping "a good 200 pastas".

At a jaw-dropping 2.65 kilograms, Jasper reckons he has scooped the largest porcini in the world in the Adelaide Hills but refuses to reveal exactly where it was growing, 9News reports.

Melanie said: "The Adelaide Hills is quite a special place. It's the only place in the Southern Hemisphere that you can find porcini."

When asked Jasper cheekily said: "I found it underneath the oak tree but that's sort of all I can say."

The porcini could prove to be quite a money-spinner for the Les family as Jasper plans on cashing in on his find while keeping his eyes peeled for an even bigger beast.

Jasper added: "Unfortunately there's too much of it for just me to eat so I'll be selling it.

"The challenge is on now to try find a bigger one, I'll definitely be on the lookout."