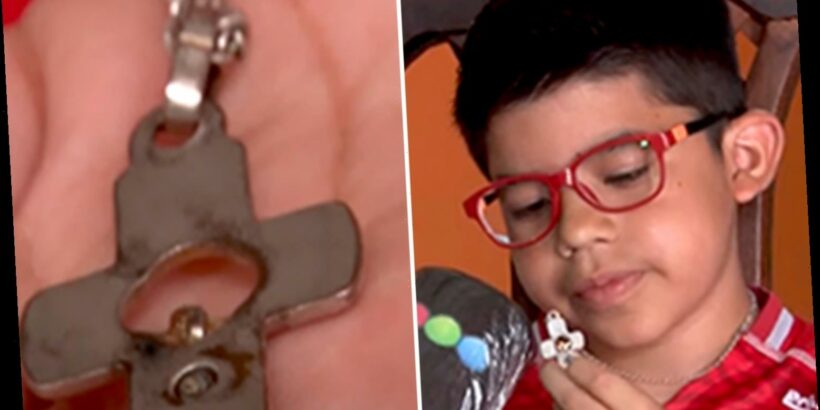 A BOY has been sensationally saved by his crucifix necklace which stopped a stray bullet hitting his heart in Argentina his family claim.

The incident occurred in the municipality of Las Talitas in the Argentine province of Tucuman at around 10pm on New Year's Eve.

Tiziano, 9, was at home celebrating the incoming the New Year with his family when he felt a strong impact to his chest.

He told local broadcaster Telefe Tucuman that he was standing in front of his house waiting for his sister and cousin to go inside when he suddenly felt pain and saw a bullet on the ground next to him.

He was taken to hospital where he was examined by medical staff who only found a superficial wound to his chest which was treated within the hour.

Tiziano's aunt sent his father, David, 36, a picture of his crucifix which she had found on the ground, that the family claim saved his life by stopping the bullet from penetrating his chest.

The nine-year-old said that until his aunt sent the picture showing the burn mark he was unaware that the crucifix had saved him, as all he remembered was losing his chain and finding the bullet.

His mother Alejandra, said that although some may believe the incident was an incredible stroke of luck or coincidence, she believes it was “a miracle” adding that Tiziano was blessed and is a blessing to both parents.

David said the authorities have been informed and are conducting investigations to find the gunman.

However, he said the most important thing is that his son is okay.

There have been no updates on any arrests.