A father is demanding answers after his four-year-old son was allowed to wander out of school alone before almost being hit by a car.

The driver of the car said she was forced to ‘slam on her brakes’ to avoid hitting the four-year-old, whose father later said that the episode left him feeling ‘physically sick’.

The boy went missing shortly after the end of the school day at 3pm. 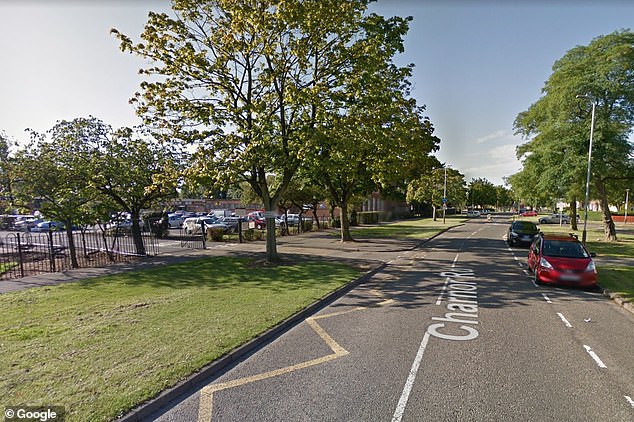 The four-year-old was almost hit by the car, driven by another parent, near Forest Lodge Academy primary school, in New Parks, Leicester

He was almost hit by the car on Charnor Road, near the school.

According to his father, a member of staff had been standing at the door and reading a roll call.

When a parent picks up their child, their name is then called out.

The missing boy’s name wasn’t read out, leading staff to assume that he was still on the premises.

The school has now apologised to the boy’s parents.

His father, who wishes to remain anonymous, told Leicestershire Live: ‘It was at the end of the school day and when parents and guardians were collecting the children.

‘Somehow my son, who is only four, managed to walk out of the school past teachers and school staff.’

He explained how the boy’s aunt was picking him up from school had parked nearby.

She then saw the commotion in the road, prompting her to go over and notice that her nephew was involved.

He said: ‘The driver said she felt sick – I feel sick too that this was allowed to happen. It’s disgraceful.

‘I want answers. I don’t know how he simply walked out.

‘He could have been run over or abducted. And we’d have had no idea. It’s only luck that prevented it from turning out very differently.

‘I want assurances that it will not happen again. When you send your child to school you expect every precaution to be taken to make sure they are safe.’

The school later issued a statement where they said they would be increasing security.

Headteacher Claire Caldwell said: ‘An incident took place after school on Thursday that was resolved quickly and effectively – of which we immediately informed the mother of the child.

‘Following this, and in line with good practice, we informed all necessary authorities and a full staff briefing was held where a thorough risk assessment and review of the relevant policies was completed.

‘We have already made and enforced proactive improvements and processes moving forwards.’