A Tory minister today admitted Amber Rudd did know about plans to increase the number of illegal immigrants kicked out of the UK – but insisted they were not ‘targets’.

The Home Secretary is battling to cling on to her job amid calls to resign after she told MPs she did not know her officials used deportation targets and does not agree with them.

But a leaked memo sent to her and former Immigration Minister Brandon Lewis last year detailed the plans to kick out another 10 per cent of illegal immigrants.

Ms Rudd has insisted she did not read the memo, but is facing a growing clamour to resign amid criticisms she either misled MPs or does not have a grip on her department.

Speaking on the BBC’s Andrew Marr show today, Mr Lewis admitted Ms Rudd did know about the ‘ambition’ to deport an extra 10 per cent of illegal immigrants. 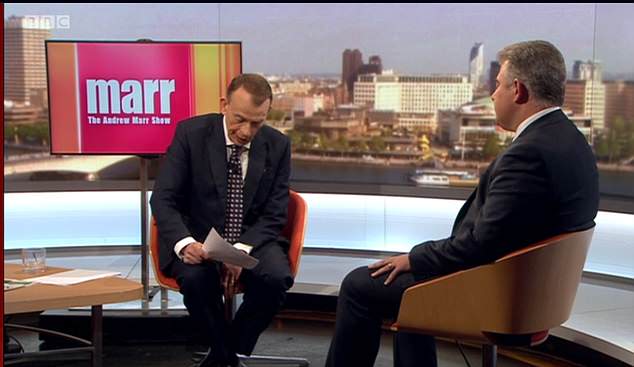 Speaking on the BBC’s Andrew Marr show today, Brandon Lewis admitted Ms Rudd did know about the ‘ambition’ to deport an extra 10 per cent of illegal immigrants

But he insisted this is different to the ‘targets’ she was quizzed about at the Home Affairs Select Committee last week.

What is the Windrush scandal and how did the fiasco develop?

The 492 passengers were temporarily housed near Brixton in London. Over the following decades some 500,000 came to the UK.

Many arrived on their parents’ passports and were not formally naturalised as British citizens.

1973 – A new immigration Act comes into force putting the onus on individuals to prove they have previously been resident in the UK.

The move came despite staff warnings that the move would make it harder to check the records of older Caribbean-born residents experiencing residency difficulties, it was claimed

2014 – A protection that exempted Commonwealth residents from enforced removal was removed under a new law. Theresa May was Home Secretary at the time.

Under a crackdown on illegals, Windrush immigrants are obliged to provide proof they were resident in the UK before 1973.

April 2018 – Allegations that Windrush immigrants are being threatened with deportation break. Theresa May issued a grovelling apology to Caribbean leaders after major backlash

However, the revelation will pile further pressure on Ms Rudd who is only just clinging on to her job and will return to the Commons tomorrow to face a fresh grilling.

Speaking today, Mr Lewis today admitted that he did read the memo and was aware of the deportation targets.

He told the BBC’s Andrew Marr Show ‘That memo to me was about looking at the results from the previous year – the team outlined to me plans for a 10 per cent increase in illegal deportations.

‘Amber was right in what she said. If you look at what she was asked about at the select committee – she was not aware of that….That memo did not make out those internal targets…

Mr Lewis said the  difference between a specific local ‘target’ and a national ‘ambition’ is an ‘important distinction’.

But the presenter Andrew Marr hit back: ‘This is a target – going back to the memo it says that progress has been made on the 10 per cent increase across the board on enforced removals that we promised to the Home Secretary.

Transport Minister Jo Johnson backed Ms Rudd to stay in her job – saying she is a ‘fantastic’ minster dedicated to her job.

Defending her claims not to have known about the targets he said she has got a ‘very big’ brief and added: ‘Its unrealistic to expect a secretary of state to have seen every single memo.’

But Labour’s shadow home secretary Diane Abbott MP accused Mr Lewis of of hiding behind language and trying to ‘spin’ his way out of a crisis. 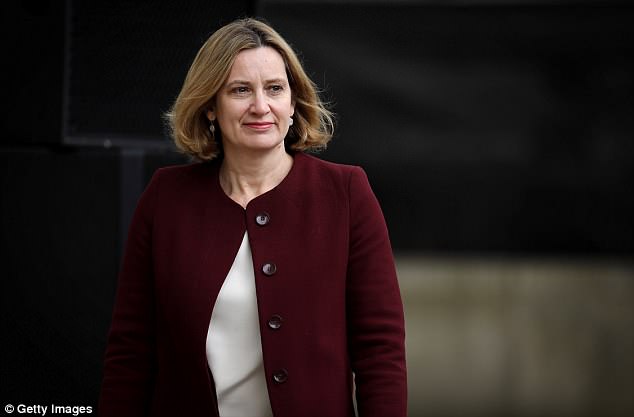 The Home Secretary (pictured in Downing Street last week) is battling to cling on to her job amid calls to resign after she told MPs she did not know her officials used deportation targets and does not agree with them.

She said:  ‘Brandon Lewis’s attempt to save the Home Secretary’s career by hiding behind semantics is insulting for the people who have been affected by the Tories’ heartless policies.

‘Beneath the spin, he let the truth slip and sealed her fate. Amber Rudd knew of the targets she pretended didn’t exist.

‘The Home Office was fully aware that lives were being ruined as a result of their ‘hostile environment’ but pressed ahead anyway. It’s time for Rudd to go.’