TORY CHAIRMAN BRANDON LEWIS: This goes beyond party politics. In the name of basic decency, how can Labour put up with Jeremy Corbyn? 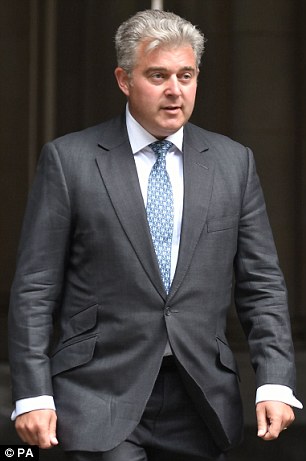 Brandon Lewis, chairman of the Conservative Party, questions how Labour put up with Jeremy Corbyns on the grounds on basic decency

Throughout his time as Labour leader, Jeremy Corbyn has been embroiled in controversy.

Behind his rhetoric about a ‘kinder, gentler politics’ there lurks a veteran hard-Left politician, characterised by radical dogmatism and worrying links with those hostile to the West.

But even for this ideologue, an appalling new low has been reached as a result of the Daily Mail’s revelations about Corbyn’s attendance in 2014 — only a year before he became party leader — at a wreath-laying ceremony in Tunisia appearing to commemorate a group of terrorists from the Black September organisation, which perpetrated the infamous massacre of 11 Israelis at the Munich Olympics in 1972.

Through both his attendance at the event and his offensive dissembling this week about his role, Corbyn has exposed himself as unfit for senior public office, never mind his position as the official Leader of Her Majesty’s Opposition.

Labour in the past has always had its sincere policy differences with the Conservatives, but its leading figures have belonged to the democratic, patriotic mainstream.

Clement Attlee was an army major in World War I, Denis Healey a beach master at the Anzio landings in World War II. Tony Benn served as an RAF officer, and Jim Callaghan in the Royal Navy. But Corbyn is completely divorced from this tradition.

The exposure of his Tunisian escapade in 2014 is just the latest in this unedifying pattern, but the incident is beyond the pale.

The 1972 Munich attack was one of the darkest episodes in modern history. It is deeply worrying to know that a man at the top level of public life in Britain felt, only four years ago, that he should attend such an event. 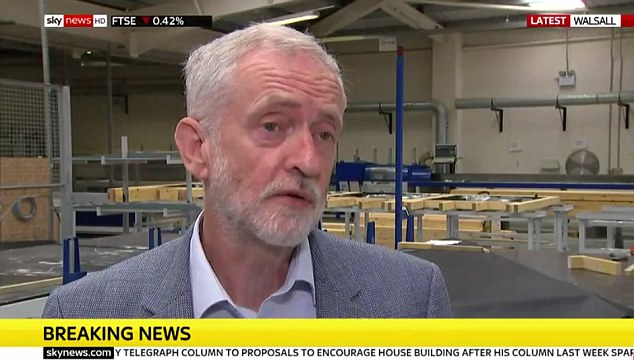 The Labour leader (pictured on Sky News today on a visit to the Midlands) faced the cameras after a photograph of him holding a wreath near the graves of Palestinian activists linked to the 1972 Munich massacre – which left 11 Israelis dead, emerged. He said he attended a ceremony in Tunis in 2014 because he wanted to commemorate all those killed in atrocities

What is almost as reprehensible is the attempt by Corbyn and his team to mislead the British public, once the investigation was published. At first his office engaged in the simple tactic of denial.

According to this narrative, the story was a ‘smear,’ ‘fake news’ and a ‘hoax.’ But the weight of evidence made this impossible to sustain.

Not only were there photographs of Corbyn holding a wreath near the memorial to the terrorists, but he had also boasted about his attendance at the event in his column in the Morning Star, a communist newspaper.

Confronted with this material, Corbyn resorted in interviews yesterday to more prevarication, arguing that he was present at the commemoration but ‘I don’t think I was actually involved in it.’ Such a form of words would be laughable were it not so serious.

The Tunisian debacle may be appalling, but sadly, it is no longer shocking. As the MP for Islington North since 1983, Corbyn has been behaving like this throughout his Parliamentary career.

When he was an obscure backbencher and serial far-left rebel, his conduct was not so important. But now, he is the Opposition Leader, and exposure of his past is vital.

This is a man whose leadership, in less than three years, has not put an end to the vile anti-semitism flourishing within his party, not least because of his own hostility to Israel.

Corbyn has regularly shown contempt for the state of Israel, not just its government and its policies, such as in 2010 when he used the occasion of Holocaust Memorial Day to host an explosively controversial meeting in Westminster at which nauseating comparisons between Israel and Nazi Germany were loudly voiced, something the International Holocaust Remembrance Alliance (IHRA) describes as clearly anti-semitic.

In 2010 he told a crowd of protestors outside the Israeli Embassy that the position of Gaza was similar to the sieges of Leningrad and Stalingrad during the Russian resistance to Nazism in the Second World War.

In 2013, he compared Israel’s actions in the West Bank to the Nazi occupation of Europe in World War Two.

In the same disreputable vein, in 2012 he used Facebook to express his support for a work in East London by graffiti artist Mear One, who had painted a clearly anti-semitic mural of Jewish plutocrats exploiting the poor.

Corbyn told the artist he was ‘in good company’, a remark for which he later apologised. But precious few other apologies have been forthcoming from Corbyn, not even over his description of the anti-semitic terror groups Hamas and Hezbollah as ‘our friends’ at an event in Westminster in 2009.

Much to the incandescent fury of respected MPs like Margaret Hodge – who lost several members of her own family in the Holocaust – Corbyn’s team has refused to write the globally accepted definition of anti-semitism drawn up by the IHRA into Labour’s rulebook.

It is an unbelievable situation in a party that has long fought to promote anti-racism and social justice.

Indeed, Corbyn likes to portray himself as a passionate warrior against discrimination, but his deeds hardly match his words.

Jeremy Corbyn is pictured with members of a delegation of Palestinian officials at the graveyard in Tunis in 2014, with the wreath which was laid in the cemetery to honour Palestinian ‘martyrs’.  He has admitted being at the ceremony after initially insisting he was there for a tribute to different Palestinians

He has been painfully slow to speak out against the anti-semitic abuse meted out to some of his own Labour MPs, like Luciana Berger, by hard-left activists.

This is beyond normal Party politics, as this is an issue far beyond the traditional, century-long battle between Conservatives and Labour.

I remember the Labour party of old and it saddens me to see it in this state.

Thanks to Corbyn’s leadership, decent, moderate Labour activists and MPs are in complete despair at what is happening at the very top of the Labour party.

Yet it is only Labour that can sort out this problem.

How much longer is the party going to put up with a leader who obfuscates about his past, who equivocates about anti-semitism, who lambasted the BBC for ‘bias’ for saying Israel has the right to exist, who refuses to be accountable for his actions and who will not even defend his own MPs and members from racist abuse?

At such a crucial time for Britain’s future, this cannot continue. I feel only foreboding.

For the sake of democracy and decency in public life, decent members of the Labour party must ask, is this man fit to lead them and to be leader of Her Majesty’s Opposition?