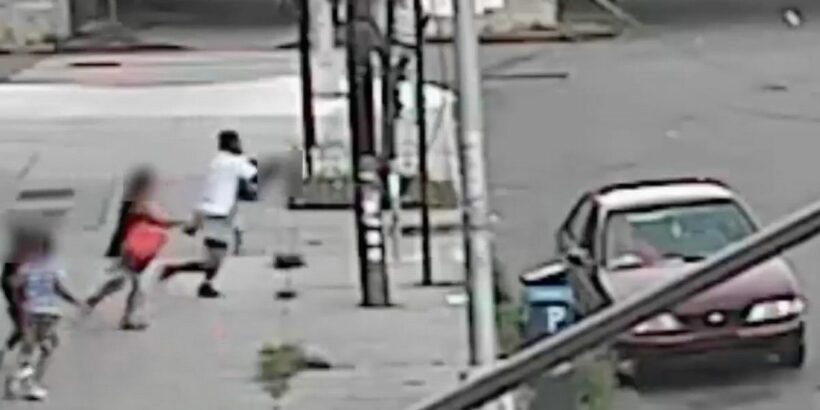 A brave mum pulled her son to safety after he was grabbed by a man and taken to a car in a brazen attempted kidnapping in broad dayling.

Police have arrested James McGonagle, 24, and charged him with attempted kidnapping, reckless endangerment and acting in a manner injurious to a child.

Dolores Diaz Lopez was walking with her three children in Queens, New York City at around 8pm on July 16.

Street surveillance video released by the police shows a man gets out of a red car parked on the side of a street and quickly heads towards Dolores' youngest son Jacob.

He grabs the boy, picks him up and runs back towards his car, tossing the boy to the back seat.

"Oh my God my kids! Oh my God my boy!" Dolores shouts while darting towards the car and gets hold of little Jacob.

The two other children help open the window and pull Jacob out of the car while Dolores holds onto Jacob's arms.

Within seconds, the terrified boy is reunited with his mother and McGonagle flees the scene.

Two men who witnessed the incident tried to stop his car as he drives away at speed.

Dolores told ABC 7: "You have to do what's necessary, no matter what.

"The car was just parked there. I would never have imagined that a man would get out of the car and grab my son.

"You always have to be aware of your surroundings and not be on your phone."

According to the police, officers recognised the suspect while they were at Brookdale Hospital for an unrelated matter.

They say McGonagle was at the hospital seeking some sort of treatment and was taken into custody.

Police are now asking for the public's help identifying the other suspect, who was hiding in the getaway vehicle.

The man, who was inside the car at the time of the incident, is a man between 50 and 60, with eyeglasses.

He was last seen an orange T-shirt, blue jeans and black shoes.

If you want to read more, make sure you sign up for more news by joining one of our newsletters here.