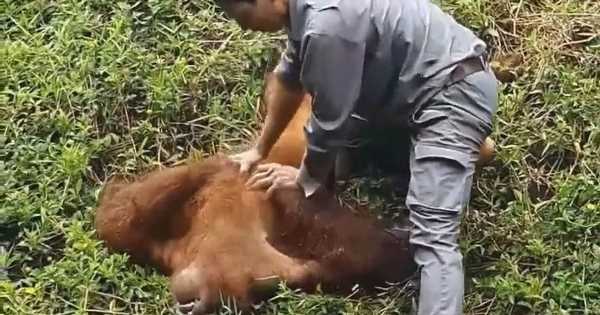 A brave zookeeper jumped into water inside an enclosure to save a drowning orangutan before performing CPR.

The hungry ape tumbled down a concrete ramp after it tried to reach food that had been thrown in by a visitor.

Shocked guests watched on in horror as the orangutan became frantic and slowly began to disappear into the water.

Following behind, the quick-thinking keeper leapt into the water and launched a dramatic search for the ape.

He dived under until he located the animal and then swam it to the concrete surface, reports The Mirror.

The drama was not over however as he then performs CPR to revive him.

Happily, a spokesman from Vinpearl Safari Phu Quoc in Phu Quoc, Vietnam, confirmed the ape survived the ordeal and is currently in a stable condition.

They added signs advising visitors not to feed the animals unless specifically allowed are regularly ignored by people.

Earlier this month an orangutan almost broke a man's leg after it grabbed him and tried to drag him through a cage.

It is seen with both hands and a foot around the victim and its tight grip is adamant not to release him while another man tries to rescue him.

There is no indication of when the footage was taken but it prompted a huge reaction and Reddit and immediately went viral after being posted.