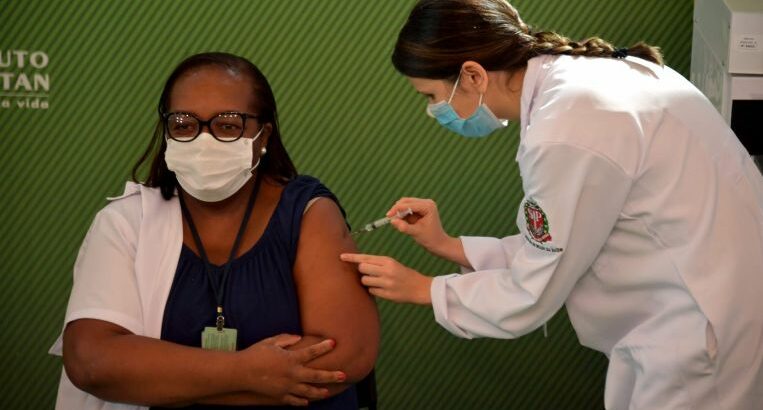 Minutes after Anvisa’s board voted unanimously to approve both vaccines, Monica Calazans, a 54-year-old nurse in Sao Paulo, became the first person to be inoculated in the country, receiving the Chinese vaccine known as CoronaVac.

President Jair Bolsonaro, a coronavirus skeptic who has refused to take a vaccine himself, is under growing pressure to start inoculations in Brazil, which has lost more than 200,000 to Covid-19 – the worst death toll outside the United States.

Delays with vaccine shipments and testing results have held up vaccinations in the country, once a global leader in mass immunisations and now a regional laggard after countries such as Chile and Mexico started giving shots last month.

Bolsonaro’s government aims to kick off a national immunisation programme this week but is waiting on shipments of the AstraZeneca vaccine at the center of its plans. That has added to public frustration and offered a political rival the chance to upstage the right-wing president.

Sao Paulo Governor Joao Doria, who oversees the Butantan biomedical center that is partnered with Sinovac in Brazil, said Anvisa’s decision was a triumph for science as he gave the go-ahead for the first vaccination in his state.

Bolsonaro, for whom Doria is a potential centre-right rival to his 2022 re-election efforts, has taunted the governor over CoronaVac’s disappointing 50% efficacy in Brazilian trials. But the federal Health Ministry has agreed to acquire and distribute the shot for the national immunisation drive.

Health Minister Eduardo Pazuello told a news conference that the rush to start vaccinating immediately was an illegal “marketing ploy” and the government would start distributing the vaccines to states on Monday, with the nationwide immunisation plan beginning on Wednesday.

Brazil could eventually vaccinate 1 million people a day, he said.

Adding to the urgency for vaccinations, a second wave of the outbreak in Brazil is snowballing as the country confronts a new, potentially more contagious variant of the coronavirus that originated in Amazonas state and prompted Britain and Italy to bar entry to Brazilians.

Butantan, which is set up to fill and finish CoronaVac doses on its production line, plans to supply 46 million doses of the two-dose shot by April, the institute said in a statement. Some 6 million of those are ready to go.

The federally funded Fiocruz institute is still waiting for a delayed shipment of the active ingredient in the AstraZeneca vaccine for finishing on a Rio de Janeiro assembly line.

The Health Ministry has scrambled to line up 2 million ready doses of the AstraZeneca vaccine from India, but officials there have suggested it may take weeks to approve exports. Pazuello said on Sunday he expected the doses from India this week.