Trump tweeted out news of Kudlow’s heart attack Monday night Eastern Daylight Time as he made his way to his Singapore summit with North Korean dictator Kim Jong-un.

He said Kudlow, 70, has been ‘working so hard’ on trade and the economy.

‘Our Great Larry Kudlow, who has been working so hard on trade and the economy, has just suffered a heart attack. He is now in Walter Reed Medical Center,’ Trump wrote. 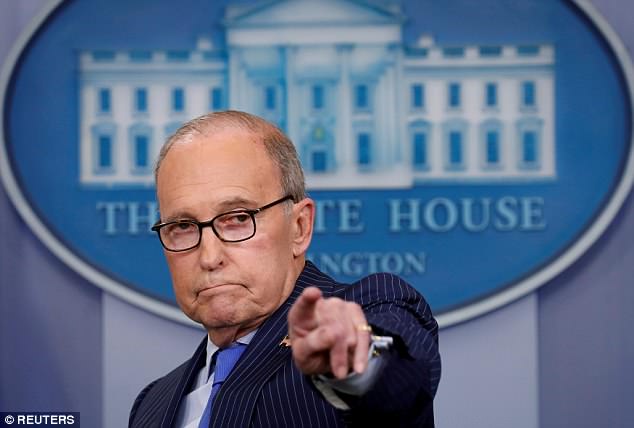 Kudlow has spoken openly of his battles with drug and alcohol addiction, including struggles with cocaine.

The matter proved not to be a major issue when he joined the government. He has been sober for more than 20 years.

Kudlow’s hospitalization comes in the midst of an escalating trade war with key allies Canada, Mexico, and the European Union.

Kudlow delivered one of the latest blows in the angry war of words when he accused Canadian Prime Minister Justin Trudeau of having ‘stabbed us in the back’ at the end of the G7 summit. 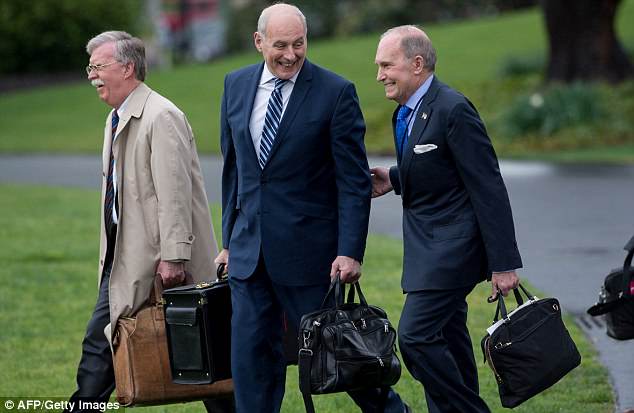 National Security Advisor John Bolton, White House Chief of Staff John Kelly and Director of the National Economic Council Larry Kudlow walk to board Marine One prior to departure with US President Donald Trump from the South Lawn of the White House in Washington, DC, April 16, 2018, as Trump travels to Florida 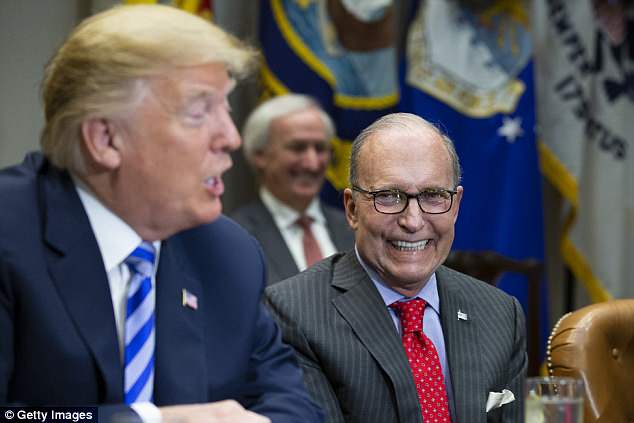 Director of National Economic Council Larry Kudlow smiles as United States President Donald J. Trump speaks with reporters during a meeting with automotive industries executives in the Roosevelt Room of the White House on May 11, 2018 in Washington, DC

Kudlow was one of a pair of administration officials who delivered brutal TV blows to Trudeau following the summit.

He accused Trudeau of making ‘polarizing statements’ on Trade in advance of the Kim summit. 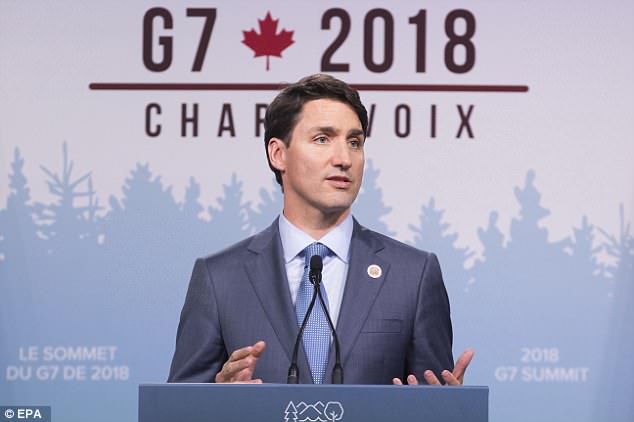 Trudeau was a target of the administration’s complaining on Sunday and into Monday, becoming the fall guy if Trump’s talks failed with North Korea this week

Trump instead took aim at Canadian Prime Minister Justin Trudeau, who he’s been sparring with from across the International Dateline over steel and aluminum tariffs the U.S. imposed on its allies in the name of national security

‘Trudeau really kind of stabbed us in the back,’ Kudlow told CNN’s ‘State of the Union’ on Sunday.

His hospitalization followed an angry clash between the White House and foreign leaders following the G7 summit.

Trump headed to the summit suggesting Russia be admitted to negotiate with the block of leading industrial powers, then tangled with Trudeau over Canada’s trade barriers – even as he insisted new U.S. tariffs on steel and aluminum were done for national security reasons.

‘Fair Trade is now to be called Fool Trade if it is not Reciprocal,’ Trump Tweeted Monday. ‘According to a Canada release, they make almost 100 Billion Dollars in Trade with U.S. (guess they were bragging and got caught!). Minimum is 17B. Tax Dairy from us at 270%. Then Justin acts hurt when called out!’

Trump advisor Peter Navarro went even further, claiming there was a ‘special place in hell’ for Trudeau.

‘He really kind of stabbed us in the back. He really, actually, you know: he did a great disservice to the whole G-7. He betrayed,’ Kudlow said. 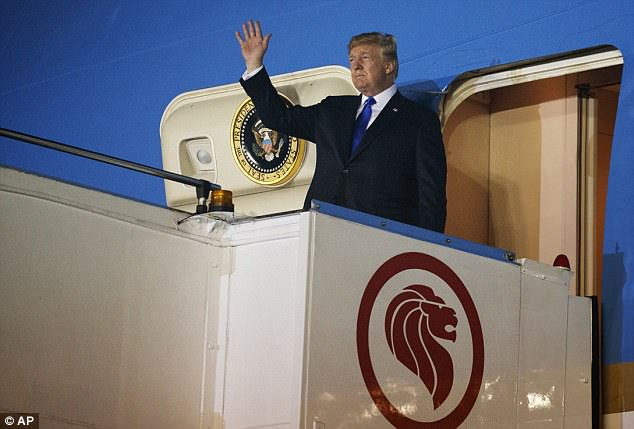 Kudlow trashed Trudeau in the interview for going ‘rogue’ on trade after the Trump agreed to sign a G7 communique. The U.S. official said that Trudeau has acted ‘sophomoric’ and was performing a ‘political stunt.’

‘You just don’t behave that way. It’s a betrayal. Essentially double-crossing,’ Kudlow said in response to Trudeau’s needling on tariffs after Trump departed Charlevoix early in order to spend additional time in Singapore.

The top aide to Trump when it comes to the economy said the former businessman ‘is not gonna let a Canadian prime minister push him around’ and is ‘not going to permit any show of weakness on a trip to negotiate with North Korea.’

‘He can’t put Trump in a position of being weak going into the North Korean talks. He can’t do that. And by the way, President Trump is not weak,’ Kudlow argued. ‘Kim must not see American weakness. It’s that short.’

Attacking Trudeau on CBS’ ‘Face the Nation,’ Kudlow barked, ‘The president is going to negotiate with Kim of North Korea and Singapore. It is a historic negotiation and there is no way this president is not going to stand strong. Number one he’s not going to allow the people to suddenly take pot shots at him. Hours before that summit and number two Trudeau should’ve known better.’

Director of the White House National Trade Council Peter Navarro charged on ‘Fox News Sunday’ that ‘there’s a special place in hell for any foreign leader that engages in bad faith diplomacy with President Donald J. Trump and then tries to stab him in the back on the way out the door.

‘To my friends in Canada,’ he added, ‘that was one of the worst political miscalculations of a Canadian leader in modern Canadian history.’