LONDON (Reuters) – Nigel Farage opened his election campaign on Friday by telling Prime Minister Boris Johnson that his Brexit Party will contest every seat in Britain unless he ditches his EU divorce deal and agrees to an electoral alliance of Brexit-supporting parties. 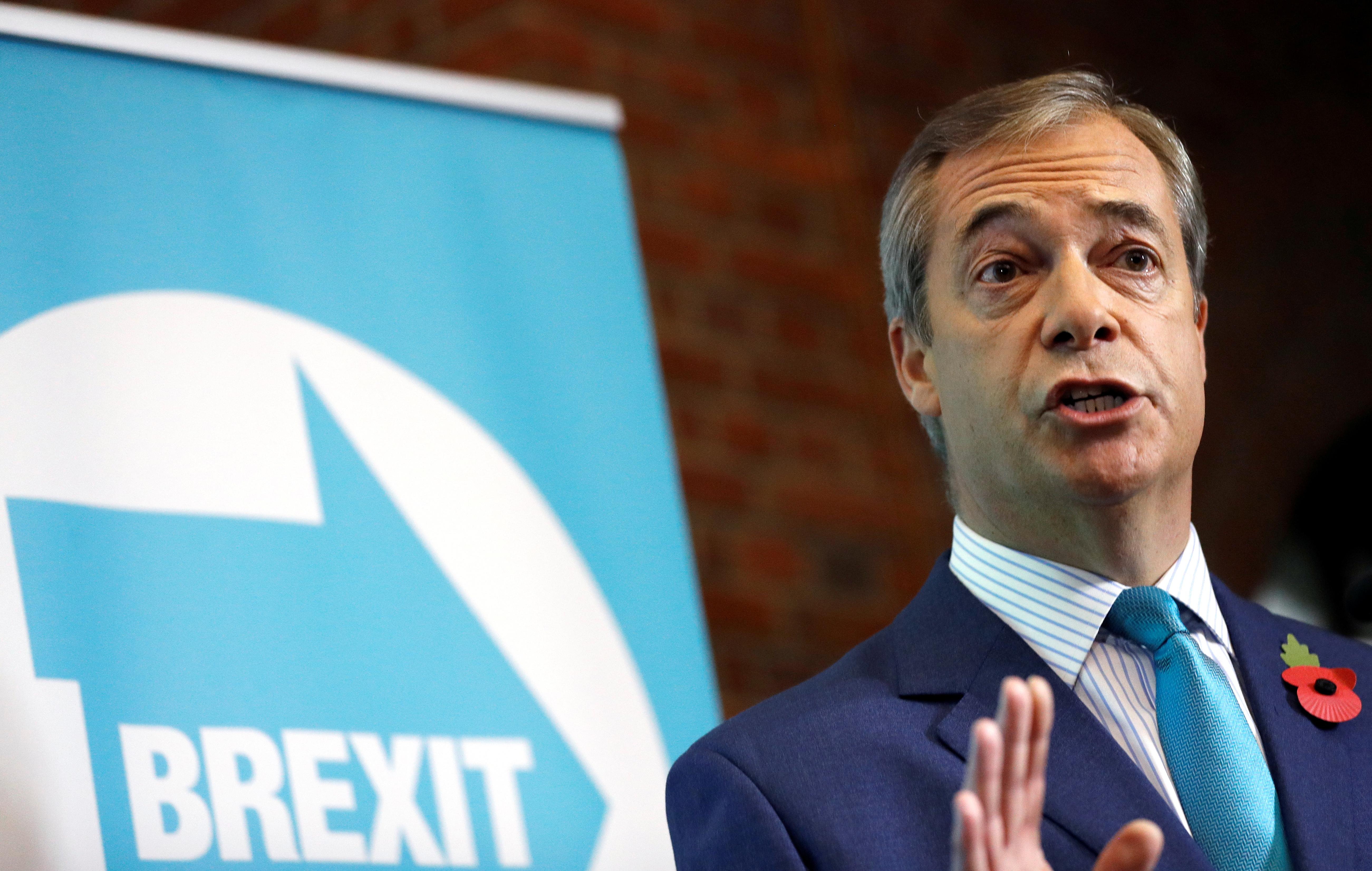 The call was swiftly rejected by Johnson’s Conservative Party.

The snap election, set for Dec. 12, is highly unpredictable so an alliance on either side of the Brexit schism could be a game changer after nearly four years of political crisis over Britain’s decision to quit the European Union.

Farage cast his demand as an offer of a non-aggression pact.

“He is trying to sell a second hand motor where he has polished up the bonnet but actually underneath nothing has changed and it is Mrs May’s appalling surrender treaty,” Farage said, referring to the deal former Prime Minister Theresa May struck which was rejected by parliament three times.

Farage has a record of exerting pressure on Conservative leaders with the threat of poaching their traditional voters.

Opinion polls show Johnson has a healthy lead over the main opposition Labour Party, but also that more than 10% of voters back the Brexit Party – enough to split the pro-Brexit vote in some seats and hand victory to Labour.

Farage said that if Johnson, who confounded his critics by striking a last-minute divorce deal with the EU two weeks ago, refused then the Brexit Party would fight for votes in every seat in Britain.

Instead he proposed that if the Conservatives did not contest about 150 seats where he thought the Brexit Party had a better chance of winning, he would stand aside in the remaining 500. He gave Johnson until Nov. 14 to consider the offer.

Farage, who as UKIP leader helped force May’s predecessor David Cameron to call the Brexit referendum and then played a lead role in the campaign to leave the EU, said that without a pact Britain’s exit from the bloc was in peril.

“This is a one-off opportunity. If we don’t get it, if we do finish up with that withdrawal agreement, then frankly, I think it’s the end of Brexit,” he said.

The idea of a pact was endorsed by U.S. President Donald Trump – a friend of Farage – who called up Farage’s radio show on Thursday and said: “If you and he get together it’s, you know, unstoppable force.”

But the Conservative Party, which has long said it would never cut a deal, quickly dampened any hope of a change of heart, saying that unless euroskeptics rallied behind them, Brexit could get bogged down in a parliament led by the opposition Labour Party.

“It will not get Brexit done – and it will create another gridlocked parliament that doesn’t work,” Conservative Party Chairman James Cleverly said.

Shunned by the British political establishment, Farage, backed by wealthy euroskeptic financiers, helped sell Brexit to millions of voters in England and Wales who felt ignored by the mainstream Conservative and Labour parties.

The Conservative’s rejection meant that Farage on Friday effectively declared war on both major parties, vowing to fight for ‘leave’ voters across Labour and Conservative seats across the English Midlands and the north as well as in Wales.

A former commodities trader, Farage has transformed British politics over the past decade by nabbing Conservative voters to put pressure on a succession of prime ministers towards ever tougher positions on Europe.

Farage’s enemies say he sells a nostalgic vision of a Britain that never was to insecure voters challenged by globalization, though opponents admit their failure to address concerns over immigration allowed him to build support.

Cast by his supporters as the godfather of Brexit, he proposes what he calls a “clean break Brexit”, which means the type of no-deal exit that many international businesses and banks say is their nightmare scenario.

He said Johnson must set a July 1 exit deadline and leave under World Trade Organization terms if it could not be met.

Asked about his personal relationship with Johnson, Farage said he had “No problem at all” with the prospect of working with the current prime minister.

“He has shown his ability to change position and now, Mr Johnson, it’s the time to drop the treaty and get on with a proper Brexit,” Farage told Reuters.