London: Prime Minister Theresa May has set up a high-stakes showdown with the European Union by abandoning a key element of her own Brexit divorce deal and insisting it must be renegotiated.

In a remarkable U-turn, May on Tuesday publicly acceded to demands by Conservative arch-Brexiters that the deal’s controversial ‘backstop’ was unacceptable. 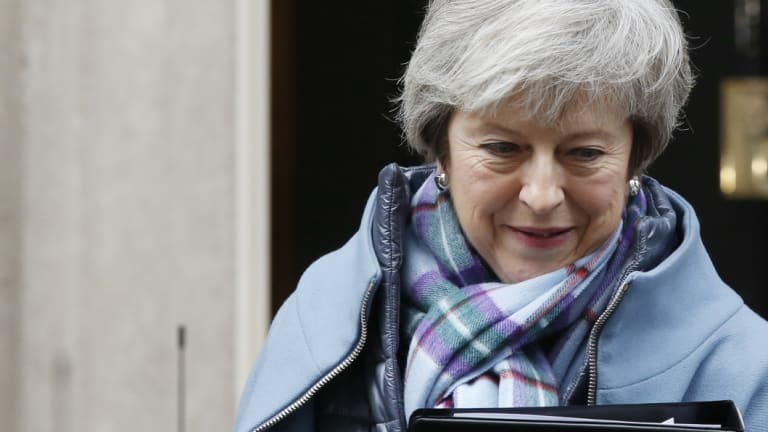 Two weeks ago, the Brexit withdrawal deal that concluded late last year was comprehensively rejected by the House of Commons in an historic defeat for the government.

“The vote was decisive and I listened,” May said on Tuesday. “Today we need to send an emphatic message about what we do want.”

She urged MPs to vote to rule out the backstop, which would see the UK in a customs union with the EU until a new trade deal is signed, “to be replaced with alternative arrangements to avoid a hard border [in Ireland]”.

This would give May “the mandate I need to negotiate in Brussels… a significant and legally binding change to the Withdrawal Agreement”, she said.

She said such a change would not be easy and there was “limited appetite” on the part of the EU, but she believed she could secure it.

“In the past two years, the EU have made concessions in many areas,” May said.

She was not specific on what the alternative arrangements to the backstop might be.

Two options proposed by Brexiters include adding a time limit to the backstop, or a clause allowing the UK to unilaterally cancel it.

But, two weeks ago, May told Parliament the “simple truth” was that the EU was “not prepared to agree” to a unilateral exit mechanism from the backstop, or a time limit. 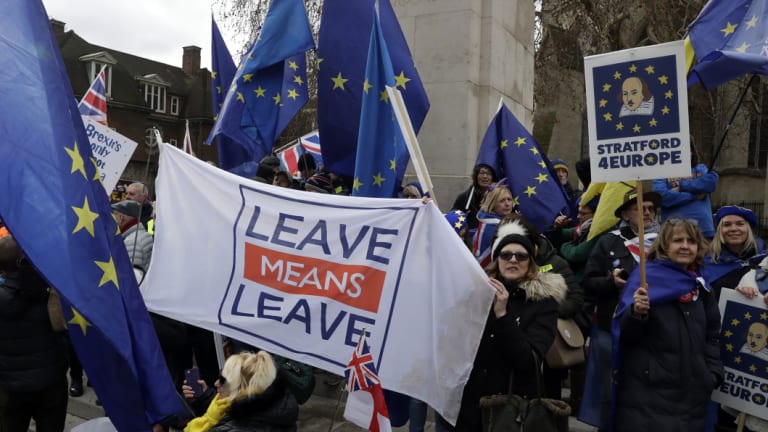 Protesters gathered in London on Tuesday as the UK Parliament was set to vote on competing Brexit plans, Credit:AP

“Rejecting the backstop altogether means no deal,” she said at the time.

A third option dubbed the ‘Malthouse’ plan emerged overnight, put together by a group of Conservative MPs.

It would see the UK following all EU rules and regulations, including the customs union and single market, to the end of 2021 or until a new trade deal with the EU can be put into effect.

Following that, instead of the backstop, the UK and EU would agree a basic no-tariff trade deal.

But the plan has been widely criticised as unlikely to appeal to the EU.

The Institute for Government’s Jill Rutter described it as “unnegotiable”, based on ideas that had been rejected “time and again” by Brussels.

A reporter for The Times said officials on “both sides of Brexit talks” had described it as “no plan at all” and “bonkers”.

And trade expert David Henig, director of the UK Trade Policy Project at the European Centre for International Political Economy, said it “stands no chance of being acceptable to the EU” as the interim free trade agreement involved would not help avoid border checks.

On Monday, Sabine Weyand, the European Commisison’s deputy chief Brexit negotiator, said the EU was “not going to reopen the [withdrawal) agreement”.

She said alternatives to the backstop had been “extensively discussed at the negotiating table”.

And the idea of a technological solution to avoid customs checks at the Irish border had also been carefully examined.

“We looked at every border on this earth, every border the EU has with a third country – there’s simply no way you can do away with checks and controls,” she said. “The [UK] negotiators have not been able to explain them to us and that’s not their fault, it’s because they don’t exist.”

But, on Tuesday, May said those proposing alternatives to the backstop “are not indulging in fantasies”.

News reports on the weekend suggested the EU would be willing to renegotiate the backstop if the UK would stay in the EU’s customs union – an option that would leave the UK unable to strike its own trade deals, and one May has repeatedly rejected.

Opposition Leader Jeremy Corbyn said the Parliament’s first duty was “to block a disastrous no deal”, and he believed that, whatever the outcome over the coming weeks, it was inevitable the government would have to delay Brexit, as there was not enough time to pass the necessary legislation.

He accused May of “running down the clock” to a no-deal Brexit, risking lorries backing up near British ports, cancer patients left without vital medicine and price rises in the shops.