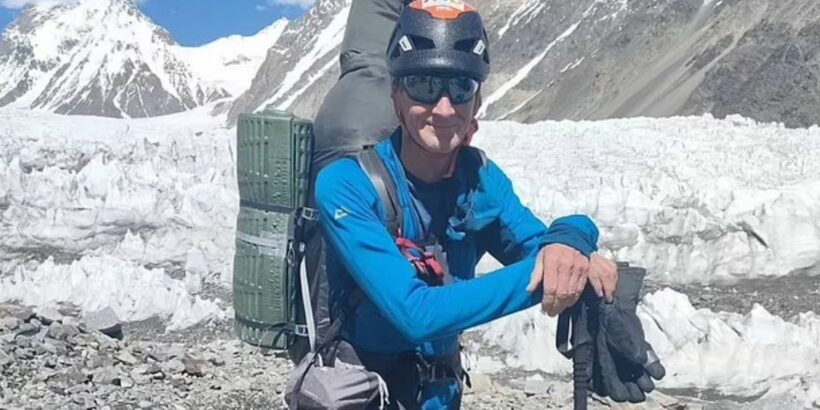 A Scottish climber has died in an avalanche while attempting to climb the world’s second-highest mountain to raise money for charity.

Rick Allen, an Aberdeen-born mountaineer attempted to take a new route to the summit of K2 for the Partners Relief And Development charity when he was caught in an avalanche on the mountain’s southeast face.

The 68-year-old was killed but his two climbing partners, Jordi Tosas of Spain and Stephan Keck of Austria were rescued without major injuries.

A statement from the charity said: “It is with great sadness to announce that Rick Allen, a member of the board of Partners Relief And Development UK and also a great friend, has died while attempting a new route on K2, the world’s second-highest mountain.

“Rick, a world-renowned veteran mountaineer, was caught in an avalanche on the south-east face but fortunately his two climbing partners survived.

“Rick died doing what he loved the most and lived his life with the courage of his convictions.

“Rick was committed to serving the world’s poorest and most vulnerable communities, and worked as a key member of the leadership of Partners Relief And Development UK for several years, campaigning for free, full lives for children affected by conflict and oppression.

“All members of the board send our condolences to Rick’s family.”

A Foreign Office spokeswoman added: “The British High Commission in Islamabad is aware of reports that a British citizen has died climbing K2 and stands ready to assist.”

On the fundraising page shared by the international aid charity, the description read: “Two of Britain’s most experienced mountaineers, Rick Allen and Jerry Gore, are attempting the ascent of K2, the second-highest peak in the world and the most challenging.

“Each is using the attempt to draw attention to the needs of a charity with which they are closely associated.

“Rick is a trustee of Partners UK which is currently focused on meeting the acute health and educational needs of refugee children displaced from their homes in Myanmar by recent political upheavals.

“Jerry lives with Type 1 diabetes and, through Action4Diabetes, facilitates the distribution of insulin to children with diabetes across SE Asia.

“If the pair is successful, Jerry will be the first British and the first French mountaineer with type 1 diabetes to reach the summit of K2.”

The fundraising effort had received £170 of the £10,000 target at the time the death was reported. Donations can still be made to the fundraising page.