Britain continued to edge back to work today as car factories fired up production lines and Poundland opened its doors – but London’s City workers stayed at home.

Boris Johnson announced last Sunday that lockdown was easing and people should return to work if they could in a plan to reboot the UK’s economy.

Thousands more made their way back today as the country eased its way out of the draconian lockdown, but some industries’ have sent more people back than others.

Car manufacturers Aston Martin, Bentley’s and Ford have all reopened plants, but the financial hubs of Canary Wharf and City of London remained quiet this morning as the majority of commuters worked from home. 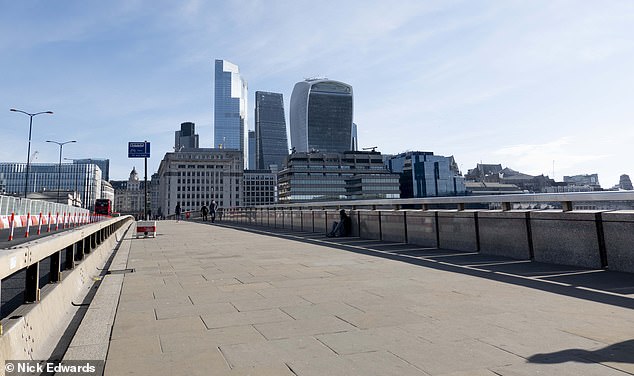 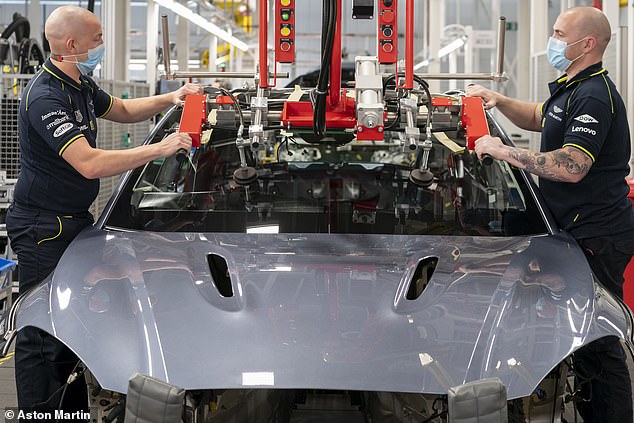 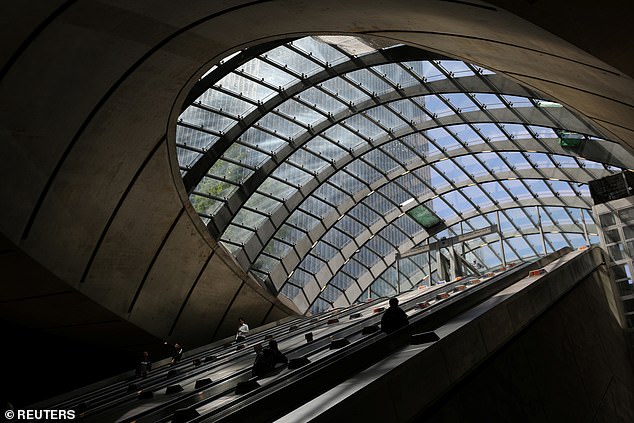 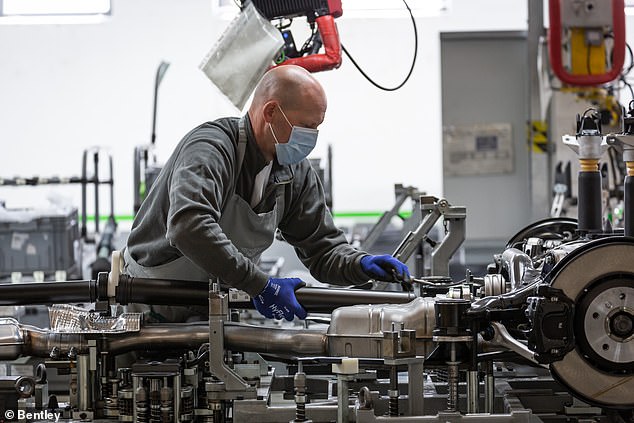 The Bentley factory in Crewe has also restarted operations last week. A worker is pictured here is protective equipment 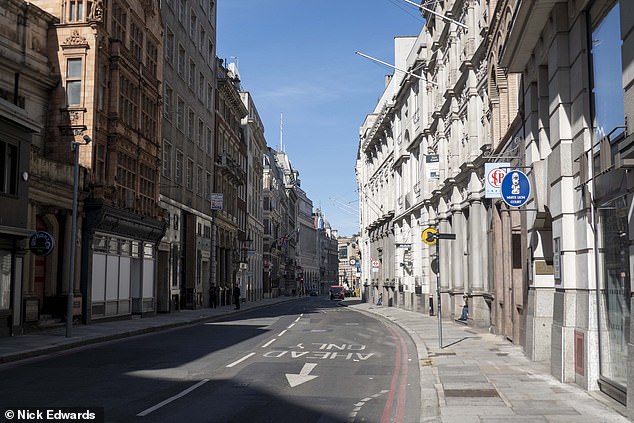 The City of Of London was quiet this morning,The prime Minister Boris Johnson has said pubic should be encouraged to head back to work if they can’t work from home after covid-19 / coronavirus lockdown is eased

Aston Martin has opened its plant in St Athans, Wales, with almost 95 per cent of workers now back and following newly-implemented social distancing rules.

Rival Bentley now has 1,700 workers at its plant in Crewe, following a comprehensive review of safety measures.

Production has also resumed at Ford’s plant in Bridgend, Wales. The plant employs around 1,200 people.

And discount retailer Poundland has reopened 33 of its stores across the UK after previously closing some of them in April.

However, despite Transport for London saying today that Tube services are back at 75 per cent, City workers stayed away from their offices today.

The Square Mile appeared deserted with only a handful of employees venturing into central London.

London Bridge station was practically empty during the traditional early morning rush hour with train carrying as few as one passenger per carriage.

Doctors, nurses, IT staff, construction workers and a recruitment consultant were the only people venturing into the City. 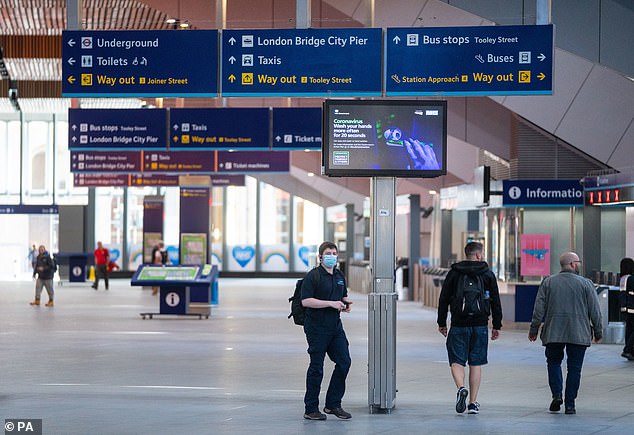 Passengers at London Bridge station in London, as train services increase as part of the easing of coronavirus lockdown restrictions, but there are still very few passengers 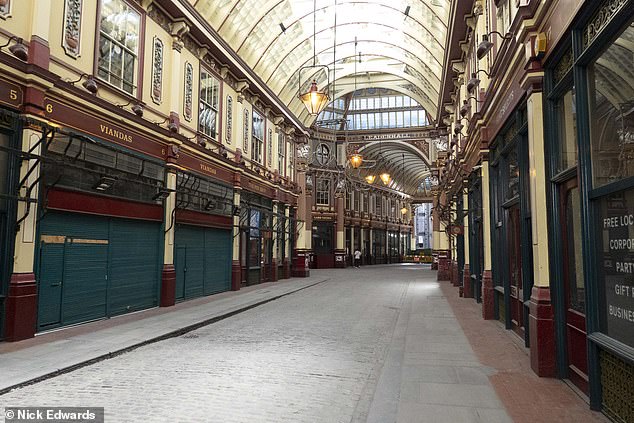 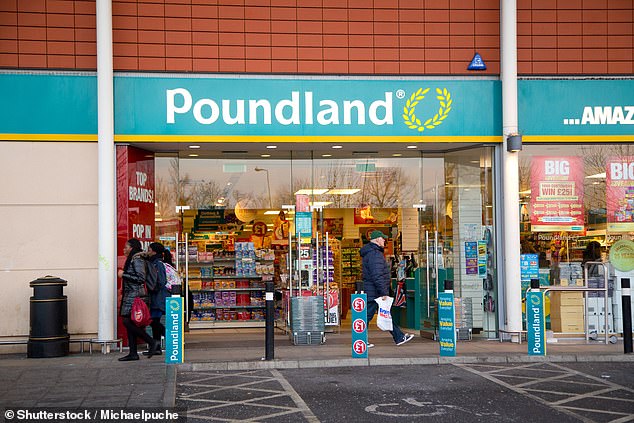 Discount retailer Poundland has reopened 33 of its stores across the UK after previously closing some of them in April.

However, all were taking precautions against contracting Covid-19 – including gloves, face masks and avoiding the tube.

MailOnline contacted HSBC, who have a headquarters in Canary Wharf, said that colleagues who could work from home are continuing to do so.

Standard Chartered, who are based in the City of London, said that only traders are going into the office, and most people are still working from home.

And Lloyds also said there had been no significant change to working practices. Some 60,000 Lloyds staff are thought to be working from home during the pandemic.

The reason for the discrepancy between industries’ is that retail and manufacturing require people to be on site to either serve customers, or build things, such as cars or homes.

But many of the financial service functions, apart from trading, can be done remotely. 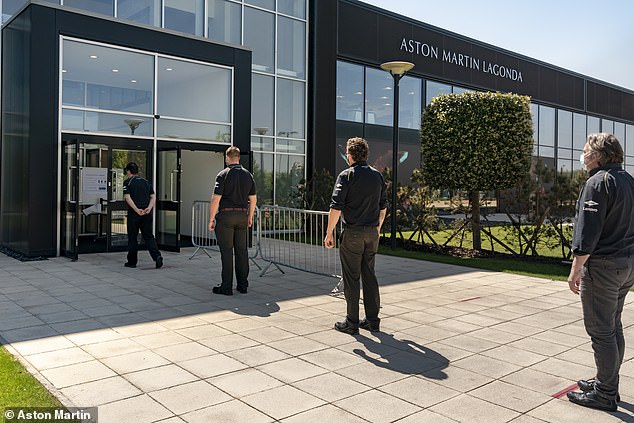 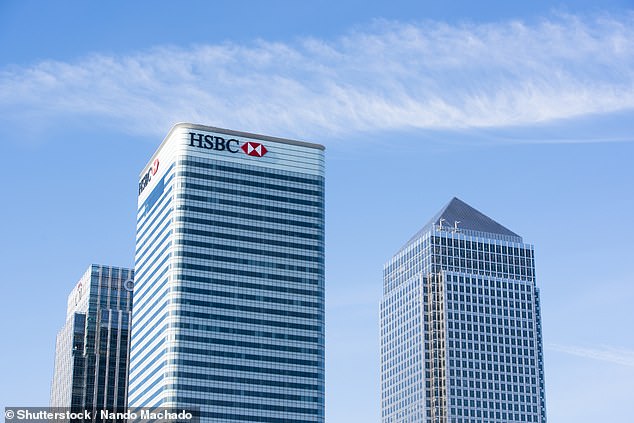 HSBC, who have a headquarters in Canary Wharf, said that colleagues who could work from home are continuing to do so

Meaning that employees can still work from home, and abide by the government’s advice that you shouldn’t use public transport if you can work from home.

Construction project manager Steve Kelly, 50, from Essex, told MailOnline: ‘I’ve been at work pretty much through the whole of the lockdown.

‘We have a number of sites across central London. Some of our workers have been furloughed but now we’ve told them it’s time to come back or go off on statutory sick pay. The company cannot survive if we don’t get back to work.

‘I’m not taking the train or the tube. I drive up to the edge of the City of London and then I walk into town. There’s no way I’m getting on the tube.’

IT manager at a law firm Martin Savage, 45, from Kent, said: ‘I’ve been back in the office for about three weeks. We’re moving offices so there’s a lot to do. 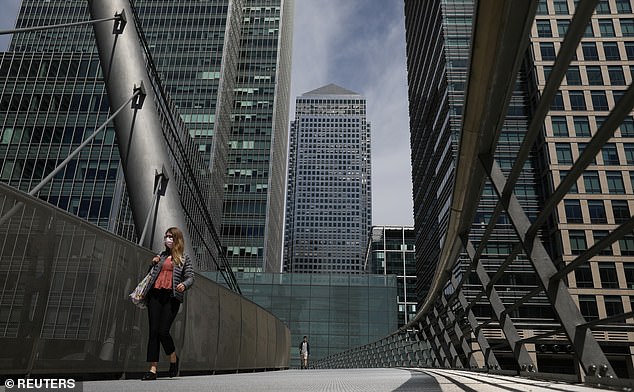 A woman wearing a face mask crosses a bridge in front of One Canada Square in Canary Wharf, this morning 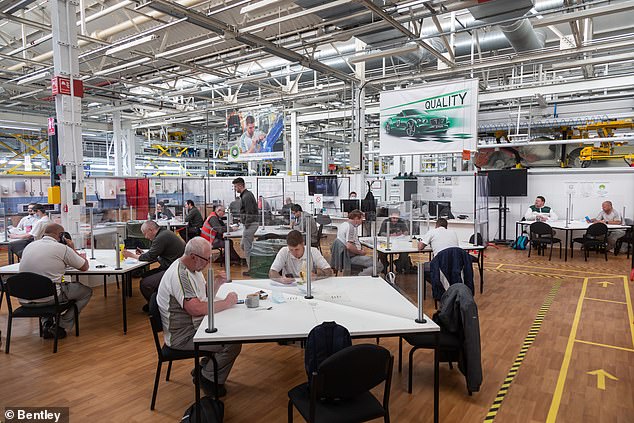 Workers sat apart adhering to social distancing in Crewe. A one way system can also be seen on the floor 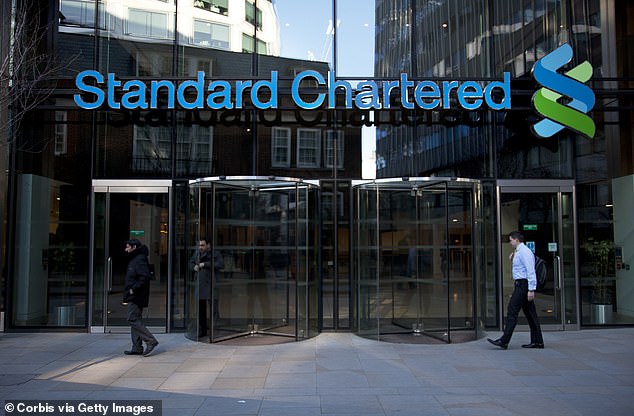 Standard Chartered, who are based in the City of London, said that only traders are going into the office, and most people are still working from home

‘My wife was a bit worried about me going back to start with but the train is completely empty. I was the only person in the carriage today, which is how it has been most of the time. And I ride to the station and ride from London Bridge to the office so I don’t have to go on the tube.’

Moorfield’s Hospital doctor Duncan Rogers said: ‘I’ve been working through the whole of the lockdown.

‘But I have not been using public transport. I walk from home in Kennington [south London] up to the hospital in Old Street and home again in the evening.’

Recruitment consultant Emily, 25, has cycled into work today for the first time.

She told MailOnline: ‘My brother was giving me a lift but I’ve cycled in today because the congestion charge has come back and he has stopped driving.

‘I’ve been back for a couple of weeks but there is hardly anything going on.

‘I don’t want to use public transport so I’m going to try cycling.’ 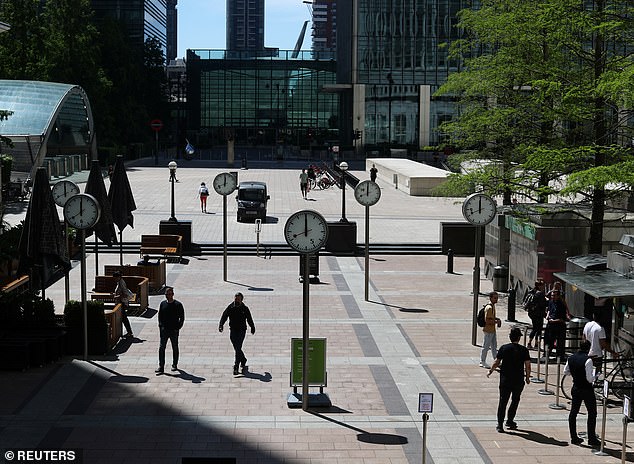 People are seen in Canary Wharf, following the outbreak of the coronavirus disease 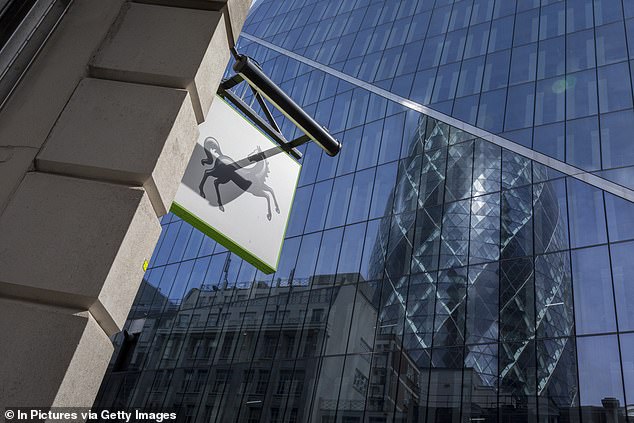 And Lloyds also said there had been no significant change to working practices. Some 60,000 Lloyds staff are thought to be working from home during the pandemic

Nurse Rosario told how she had been caring for cancer patients throughout the lockdown.

She said: ‘I work at a private hospital and we stopped all treatment except cancer treatment. So, I have been working with cancer patients.’

Construction worker Aodhan McMahon [CORR] said he was not concerned about using trains or the tube as he was taking precautions.

Aodhan, 24, from Orpington, Kent, told MailOnline: ‘The train up to London is empty. There’s never more than two or three people in the carriage. I wear a mask on the train and the tube and I’ve got hand sanitizer gel.’

Air Conditioning engineer Gary, 52, from Bexley, Kent added: ‘I’m not too worried. I’ve been at work and using the trains and the tube throughout the lockdown. You’ve just got to get on with it.’