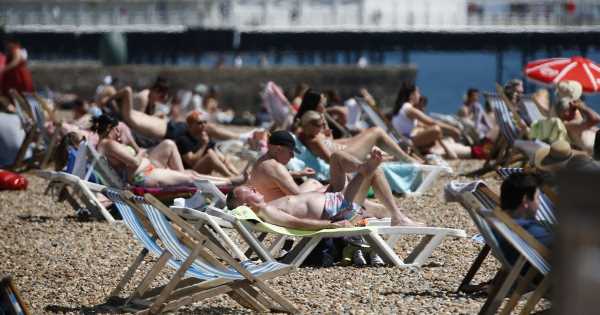 The hot weather in the UK is set to last and if anything get even hotter, with temperatures this weekend overtaking Portugal.

The downgrading of Portugal from the Covid green list to the amber list has caused thousands of families to pack up early and head back to the UK before the new rules came in to effect on Tuesday.

However, the returning Brits may have the last laugh yet with the mercury levels in the UK set to smash past those in the Algarve.

Temperatures in parts of the UK could reach 30C on Saturday and Sunday which could officially mean that the country is caught in a heatwave.

According to The Sun, forecasters Netweather are predicting the hottest weather to be in the south east with temperatures possibly "nudging the low 30s," and lasting all the way to July.

The Met Office recently said that high pressure from the Portuguese-owned Azores could bring the 30C heatwave to the UK over the rest of the week and through the weekend.

In the Algarve on Saturday, it will see temperatures rise to 25C and on Sunday it is predicted to be 24C, whereas the BBC predicts 25C for London on Saturday and 29C on Sunday.

With the weather so consistently hot it may mean that parts of the country are officially in heatwave territory.

The Met Office's Oli Claydon told the Mail Online: "There's a definition of what a heatwave is – it is at least three consecutive days of maximum temperatures meeting or exceeding a temperature threshold.

"It is above 28C for London and a large chunk of the south east, it is 27C for the Midlands and going towards the south west its 26C.

"In Northern Ireland, Scotland, Wales, Devon and Cornwall and the north east its 25C– so it is a sliding scale depending on where you are, but we haven't yet met that maximum threshold."

And bookies are starting to predict that this could be the hottest summer on record ever with odds of just 1/2.

Alex Apati of Ladbrokes said: "We've been treated to a scorching start to June and the latest odds suggest there's plenty more record-breaking sunshine to soak up this summer."

On Thursday the Met Office is predicting that it will be a hot but muggy day with cloud moving in over parts of the country.

The weather agency tweeted: "Thursday will be a fairly cloudy and #muggy one. Cloud will be thickest in the west with some drizzle and coastal fog cloud.

"Further east though there will be some #sunshine in the afternoon and evening once again."