Two British OAPs, 72 and 70, are arrested after a ‘large amount of cocaine’ is found in their cabin when cruise ship docked in Portugal

Portuguese police have arrested two British OAPs on board a cruise liner after a ‘large amount of cocaine’ was found inside their luggage in a search of their cabin.

The pair, aged 70 and 72, were held after their ship docked at Lisbon Port’s cruise terminal after returning from the Caribbean.

Officers from Portugal’s Policia Judiciaria (PJ) are believed to have acted after receiving a tip-off from the UK’s National Crime Agency.

The unnamed OAPs are being held in prison after appearing before a judge in a closed court hearing. 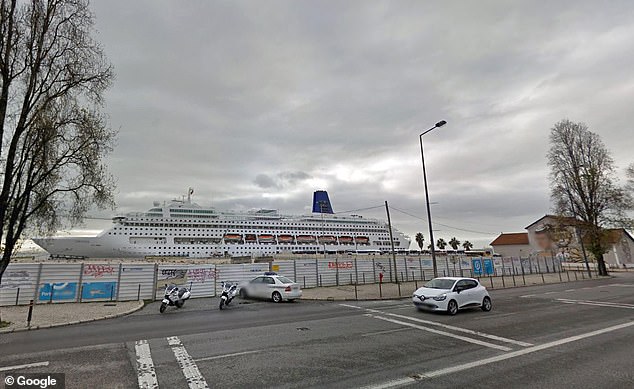 A cruise ship at Lisbon Port’s cruise terminal; the elderly pair were jailed after police seized four suitcases full of cocaine from their cabin aboard the ship which sailed from the Caribbean

The Portuguese authorities described them as a ‘foreign couple’ in a statement and local media reported they were British.

The statement said: ‘The Policia Judiciaria’s National Drugs Trafficking Unit has identified and arrested a foreign couple who were travelling on a cruise line doing a circuit which took in the Caribbean and Europe.

‘They were arrested on suspicion of international drugs trafficking.

‘The operation, which took place with the support of the Maritime Police, was the result of the permanent exchange of information and cooperation that exists between the PJ and the British forces of law and order, specifically the National Crime Agency.

‘The arrests occurred after the ship had reached Lisbon Port’s cruise terminal and after a search of the cabin the suspects were using, where four suitcases with a high amount of cocaine hidden inside was seized.

‘The suspects, who are aged 70 and 72, were questioned as suspects or arguidos before being remanded in prison.

‘The investigation by the PJ and UK authorities is ongoing.’

Portuguese police did not specify how much cocaine had been seized and when the arrests took place, or which firm operated the transatlantic cruise liner.

The Caribbean is a hot-spot for high potency cocaine and is often the first port of call from South America, before the drug is trafficked towards Europe.