Britons in Italy’s locked-down coronavirus zones are ‘free to return home or complete their holiday’, says UK Foreign Office – despite Italians being threatened with JAIL if they travel to the south of their country

While regions of Italy are under an extreme quarantine in which people face a three-month prison sentence for leaving locked-down areas, Britons in the coronavirus-ridden zone are free to travel home without facing penalties.

The Foreign Office confirmed that British tourists in the northern parts of the country – the worst affected region – ‘are free to return home or complete their holiday’ under guidelines from the Italian government.

They said nationals will not be met by anyone at the airport in Britain, nor will they be put into quarantine or told to take a test for the bug which has killed 3,500 world wide and has infected more than 100,000. 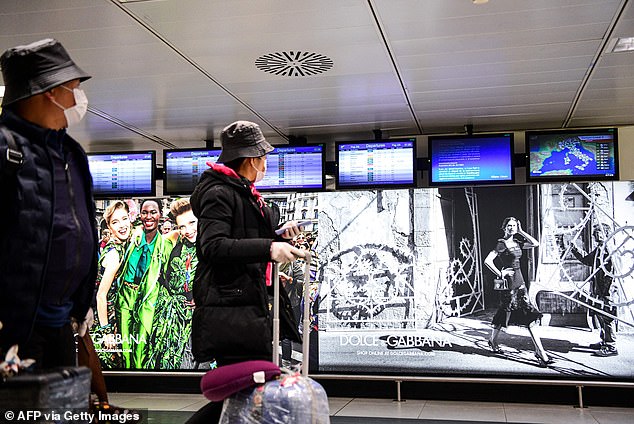 While regions of Italy are under an extreme quarantine in which people face a three-month prison sentence for leaving locked-down areas, Britons in the coronavirus-ridden zone are free to travel home without facing penalties. Pictured: Travellers at Linate, Milan’s city airport 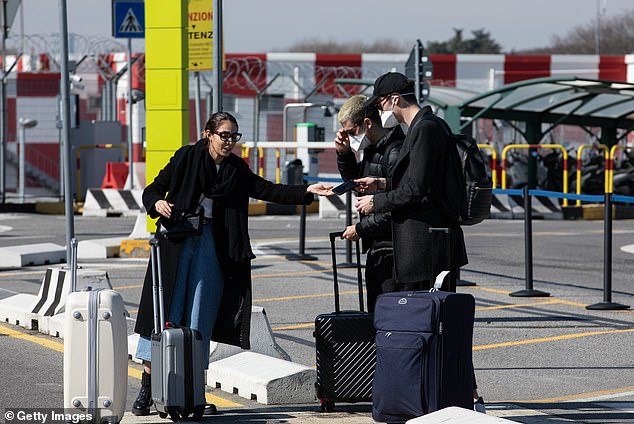 The Foreign Office confirmed that British tourists in the northern parts of the country ‘are free to return home or complete their holiday’ under guidelines from the Italian government. Pictured: Linate airport in Milan 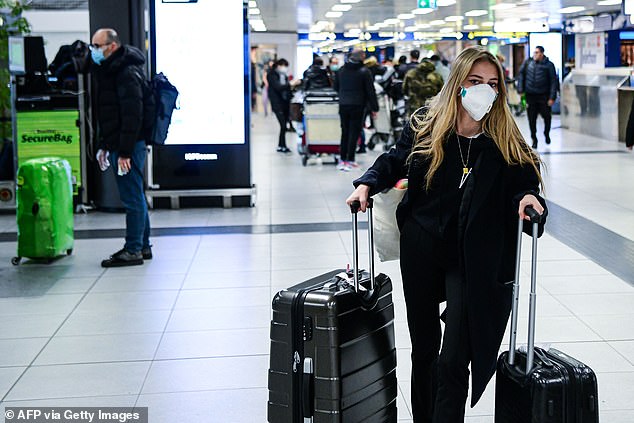 A passenger wearing a protective face mask, amid concerns about coronavirus, walks in Linate Airport in Milan 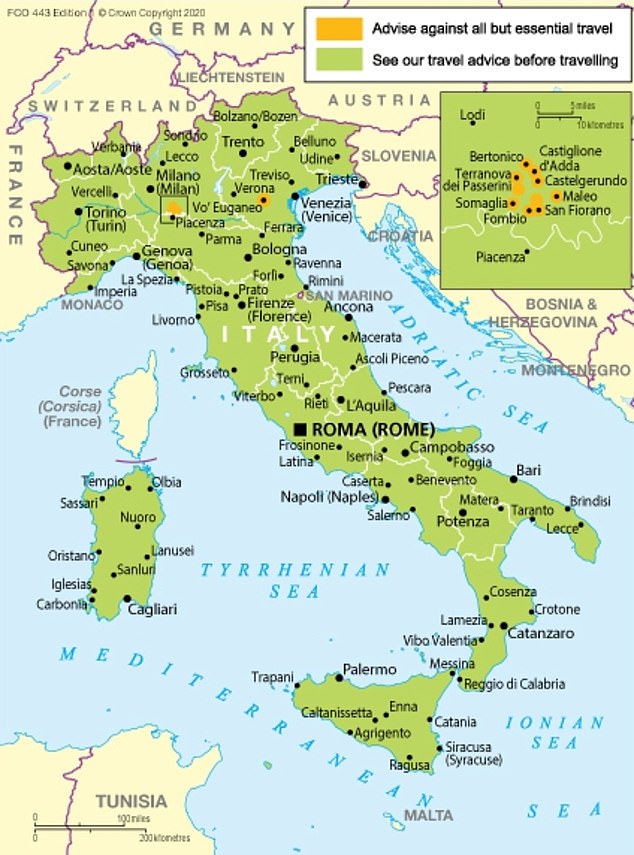 The foreign office advises 14 days of self isolation once back in Britain. Pictured: Those in the orange regions are advised against all but essential travel by Britain’s Foreign Office 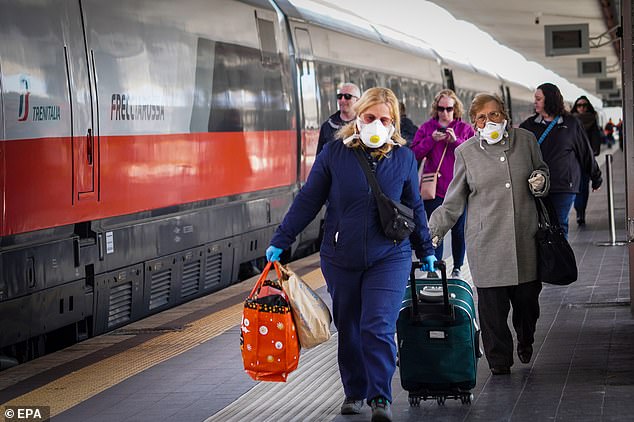 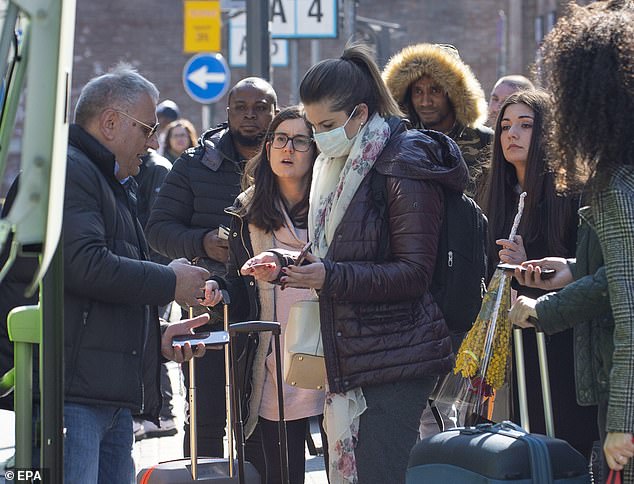 Mass panic swept in after the Italian government imposed a quarantine affecting 16 million people in the country’s northern region in a bid to combat the spread of deadly coronavirus. Pictured: People queue at bus stations trying to leave Lampugnano

The foreign office advises 14 days of self isolation once back in Britain – but there is nothing stopping people from using public transport or entering crowded places on their way home.

People evacuated from Wuhan – the epicentre of the outbreak –  were quarantined for 14 days in an isolation compound.

They were transported back in a secure plane with a separate cabin for anyone displaying symptoms and those who display symptoms on landing were transferred to an NHS hospital.

The Italian government today announced a lockdown affecting 16 million people lasting until April 3 in a desperate bid to combat the spread of deadly coronavirus.

Anyone who flouts the quarantine rules – in which no-one can leave the ‘orange zone’ without a serious reason – could face three months in prison or a fine of up to 206 euros (around £178). 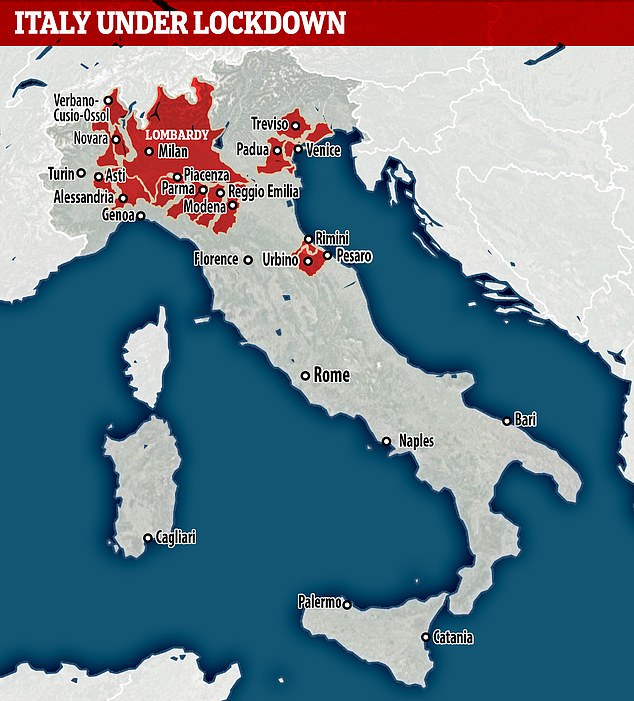 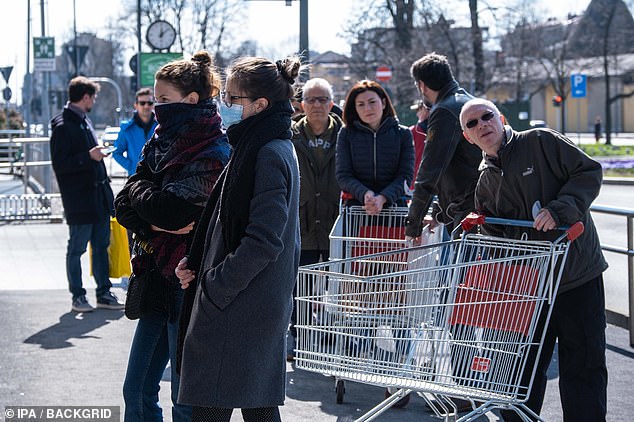 Panicked shoppers queue to buy food in Via Rubattino, Milan, after it was announced that multiple regions of northern Italy would be quarantined 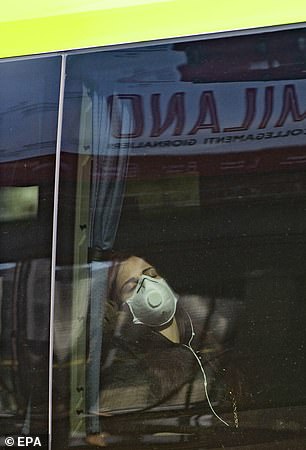 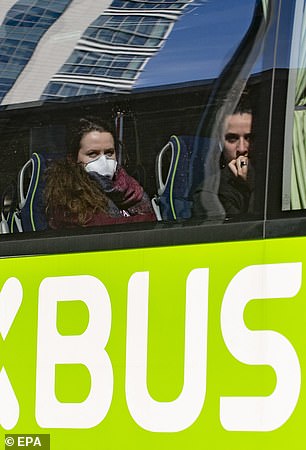 People on buses wear protective face masks as they wait to flee Lampugnano, Milan, after the area was put on lockdown

The killer disease has gripped Italy where the number of cases rose by 1,247 in the last 24 hours – the country’s biggest daily increase in cases since the outbreak began – taking the total to 5,883.

Another 36 people died as a result of the virus in Italy, bring the death toll to 233 in the largest outbreak in Europe.

The foreign office claim they are ‘working really closely with the Italian authorities to understand the implications of what these restrictions are’ for Britons in Italy.

A spokesman added: ‘We advise all British nationals to follow our travel advice for Italy, which is under constant review.

‘The safety of British nationals is always our number one priority.’ 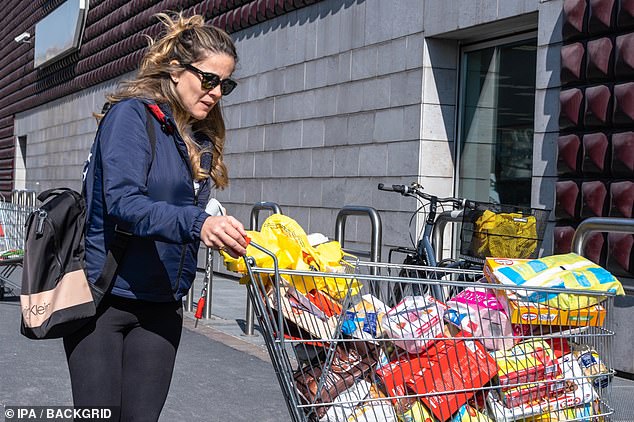 A woman with a trolley full of shopping can be seen in Via Rubattino, Milan. People frantically rush to stockpile goods after the country’s northern regions were put on lock down 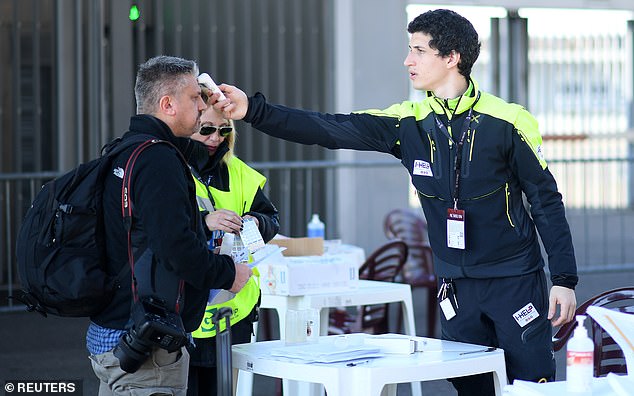 Staff check the temperature of a man before he goes into the AC Milan and Genoa CFC game at San Siro, Milan, today

While information about the penalty for breaking the rules was released, confusion still reigned from Milan to Venice as residents and tourists tried to figure out exactly when and how the new rules were coming into effect.

Travellers rushed to train stations and crammed aboard standing-room-only trains, tucking their faces into scarves and sharing sanitizing gel.

News of the impending quarantine was leaked to media early prompting further chaos as people rushed to get out of the affected areas.

Under the quarantine, bars and restaurants will remain open but must ensure that everyone is seated at least a three feet apart or face being shut down.

Weddings and funerals are also forbidden under the new rules.