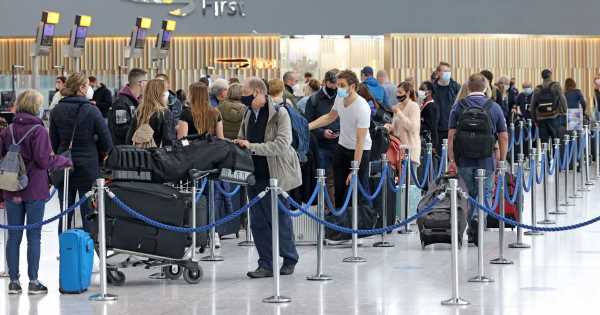 Heathrow Airport's boss has warned that the government's traffic light travel system could cause price hikes if green zones aren't revealed until the last minute.

John Holland-Kaye has warned that families could face more expensive breaks and very little choice in destination if the government do not reveal their lists for July and August sooner.

He explained that popular destinations such as Spain have low Covid infections rates suggesting they were 'coming into the green zone' but may not be announced for weeks.

Holland-Kaye told The Telegraph: "I fear the Government is going to drag its feet on Spain. I think that will be a mistake and the reason for that is that very few people are flying in spite of all the hype we see.

"If we don't put Spain on the list soon, then people will face a dilemma. Do I not go on holiday at all and face another rainy summer in the UK? Or do I break the rules and go to an amber country against guidance? People don't want to break the rule

"The chief executive said the government ought to be doing holidaymakers 'a service' by giving them enough warning that Spain, while not given the green list next week, will be possible in July. "But if the government leaves an announcement until June 'it will be too late.'"

So far, only 12 locations have been added to the green list, but Portugal, Gibraltar and Iceland are seen as actual holiday destinations.

The list is due to be expanded on June 7, with Jamaica, Finland, and the Canary Islands seen as possibilities.

However, Boris Johnson has warned that the list will not expand 'very rapidly'.

At a Downing Street press conference earlier this month, the Prime Minister said: "We will certainly be making sure that people travelling abroad will be subject to all the tests and constraints to prevent the virus from being reimported.

"That's why it's such a tiny list of countries and I don't expect we will be adding to it very rapidly. We will be maintaining a very, very tough border regime for the foreseeable future. It is just too early to talk about exactly what the summer will be like."