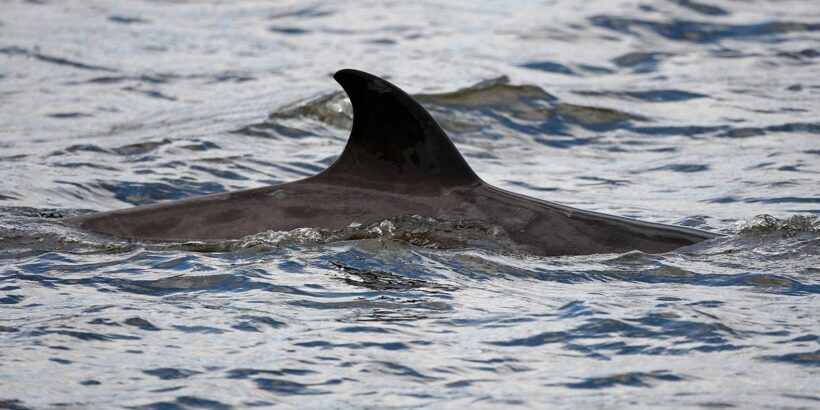 Brits are passionate about protecting our marine life, but have no idea dolphins, killer whales and sharks can be found in UK seas, according to a study.

Six in 10 didn’t know bottlenose dolphins can be spotted in UK seas – most commonly off the coasts of Cornwall, Wales and eastern Scotland – and 57 per cent weren’t aware some sharks also call the UK home.

While 82 per cent were surprised to learn pods of Orca – or killer whales – can be found around UK coastlines.

In fact, there are rare but thrilling sightings on west and north coast of Scotland, and Shetland and Orkney islands.

The research was commissioned by Sky Ocean Rescue and WWF, through their Ocean Hero campaign, which is raising awareness of UK seas, its marine wildlife and the threats they are facing, hoping to inspire Brits to take action now to support ocean recovery by becoming an Ocean Hero.

They have also created an interactive map to show Brits where they can see UK marine life for themselves, and how to be responsible when spotting marine life and what you can do to help protect and restore their habitats.

The study found most adults (88 per cent) are aware UK seas are under threat, while 81 per cent were also aware the world’s oceans can help reduce climate change by absorbing carbon dioxide.

Further to this, more than three quarters (77 per cent) of those polled feel so passionate about the future of UK seas they want the government to do more to help.

Tanya Steele, Chief Executive at WWF, said: “The UK’s coasts and seas are an unsung hero in the world’s fight against climate change.

"They play home to a great variety of marine life – from dolphins, whales, sharks, seals, puffins and seahorses to cold-water coral, seagrass and saltmarshes – but right now, our seas are in trouble.

“Over 12 years ago, the UK government committed to healthy seas by the end of 2020 – yet today, less than 1 per cent are properly protected.

"With nature in freefall, it’s vital we do all we can to stop the threats to our ocean and marine life.

“We can all play our part, by becoming an Ocean Hero, signing the petition and writing to our MPs to let them know we care about our ocean.”

The study also found four in 10 (40 per cent) never realised grey seals call the UK home, and 67 per cent didn’t know porpoises do too.

And it’s a similar story for starfish (44 per cent), Atlantic puffins (65 per cent) and the lion’s mane jellyfish (83 per cent) – this latter creature being one of the world’s largest known species of jellyfish.

Further to this, 83 per cent of adults were surprised to learn UK seas are home to such a variety of marine life and habitats.

Although 62 per cent admitted they’re not sure where which bits of the UK are best to visit in order to see such wonders as whales, seahorses and turtles.

Further to this, 57 per cent said they don’t know how to responsibly approach marine species and habitats.

And 74 per cent said they not sure how to spot sharks and other UK-based sea life.

Despite this, the study carried out through OnePoll found 78 per cent of adult agree that seeing marine life in their natural habitat is one of life’s biggest joys.

In fact, 66 per cent are ‘passionate’ about protecting UK seas.

Jeremy Darroch, executive chairman at Sky and WWF-UK Ambassador, added: “We all cherish the incredible marine life and beauty of the UK coastline, but we know it is under threat.

“The health of our oceans and climate change are inextricably linked and we need urgent action to restore and protect them.

“At Sky, we’ve set our own ambition to be net zero carbon by 2030 and want to inspire others to #GoZero with us.

"That’s why we’re calling on the UK public to become Ocean Heroes; to play their part in restoring the health of our seas to benefit climate, nature and people.”

To sign the petition, become an Ocean Hero and view the map, visit www.wwf.org.uk/ocean-heroes.

5 MARINE SPECIES AND HABITATS FOUND IN UK SEAS AND WHERE TO SPOT THEM: