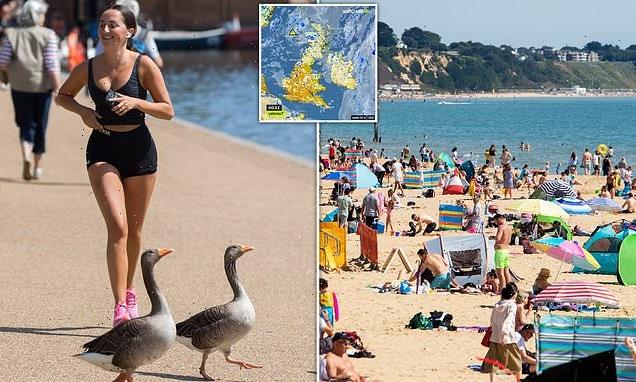 Summer finally arrives! Brits pack out beaches ahead of mini-heatwave with temperatures reaching 78F – after deluge of floods and thunderstorms at the start of August

Heavy rain has given way to a mini heatwave starting today as temperatures reach 78F (26C) after parts of the UK were battered by more than a month of showers in the first ten days of the month.

The Met Office said 46mm of rain has so far fallen in Greater London, which usually sees 53mm in the whole of August, while West Sussex has seen 98 per cent of its average rainfall for the month.

Meanwhile, Britons took to the beach today as the mercury soared to make the most of the first glimpse of summer in two weeks.

Sunseekers could be seen frolicking in the sea along Britain’s coastline today – with the southeast enjoying the warmest temperatures in the country.

It comes after parts of Surrey and areas in the south east dealt with up to 85 per cent of their total rainfall for August in just over a week.

The average rainfall for the country in August is 89mm, but so far almost 40 per cent of that total has fallen. It is 10 per cent more than expected, the Met Office said. 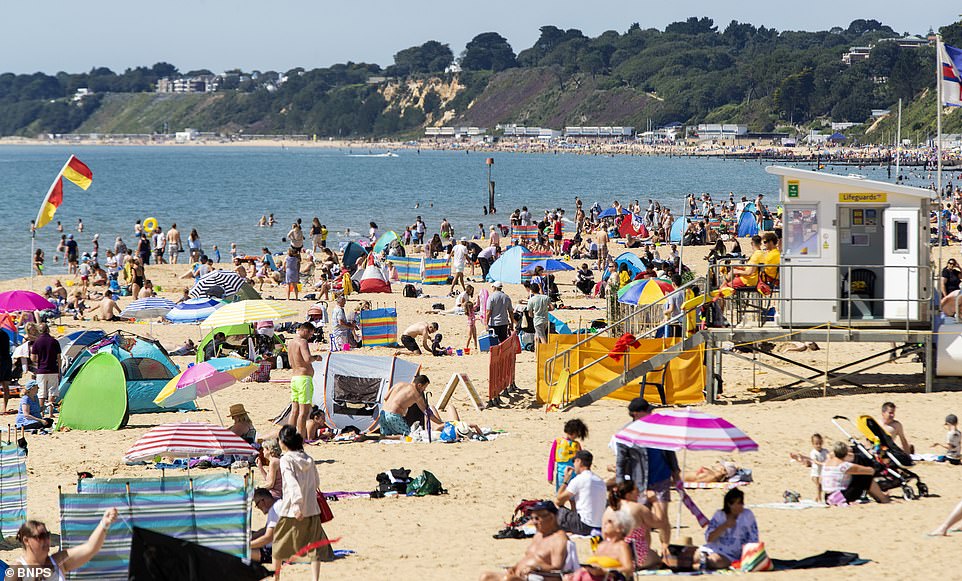 The Met Office said 46mm of rain has so far fallen in Greater London, which usually sees 53mm in the whole of August, while West Sussex has seen 98 per cent of its average rainfall for the month. Pictured, sunseekers in Bournemouth, Dorset 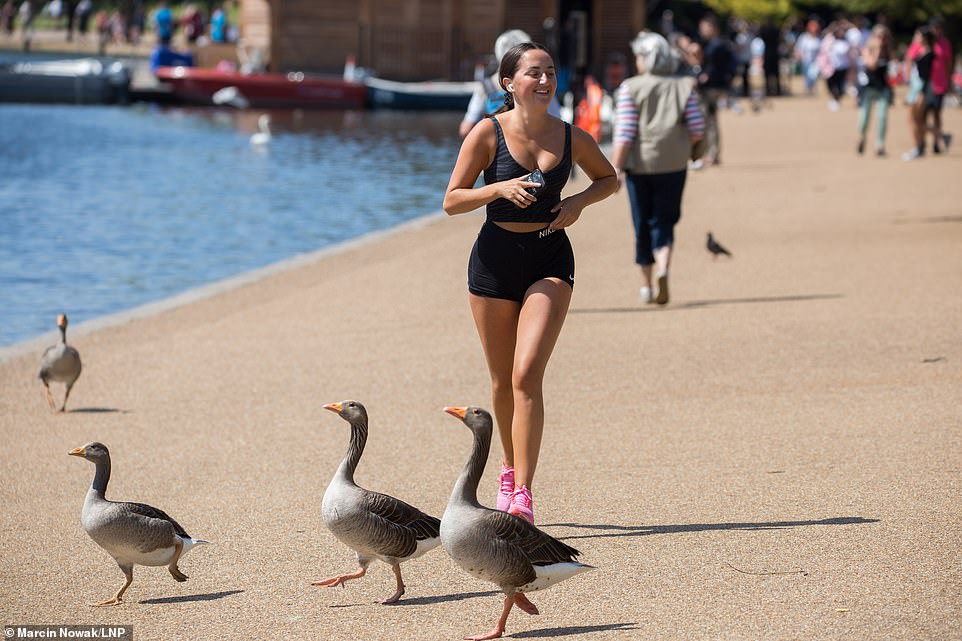 Meanwhile, Britons took to the beach today as the mercury soared to make the most of the first glimpse of summer in two weeks. Pictured, a runner in Hyde Park, London, today 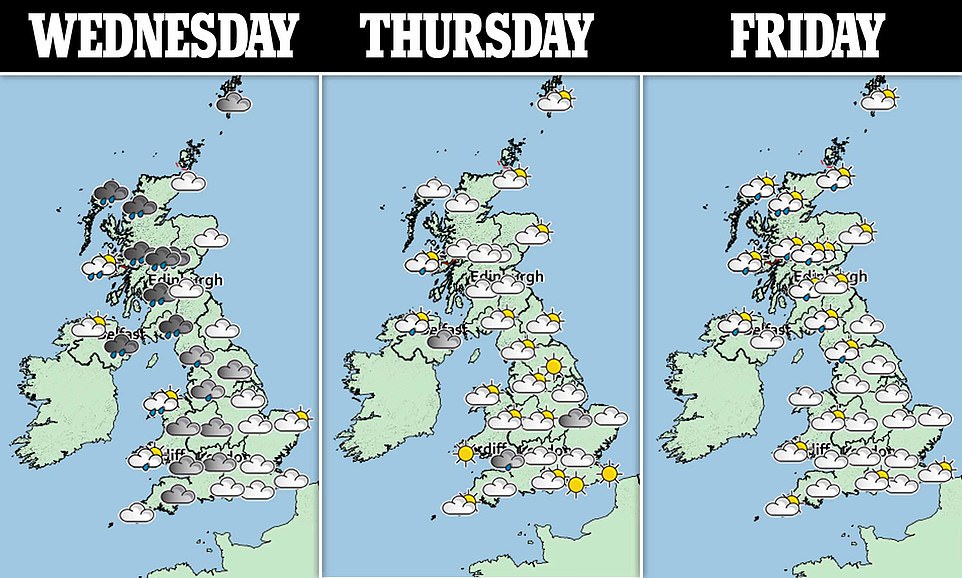 Other areas – including parts of west Scotland and eastern areas in England – have been drier than usual.

Grahame Madge, a Met Office spokesman, said: ‘August has essentially been a case of mixed fortune with some areas seeing drier weather than usual, while others have virtually had a whole month of rainfall in just 10 days.

‘We’re not expecting to see record-breaking weather, as there have certainly been wetter Augusts in the past but many areas have faced a very wet and intense period of rain.

‘We are putting this down to an area of low pressure which is moving slowly across the country bringing the damp conditions many have seen.’ 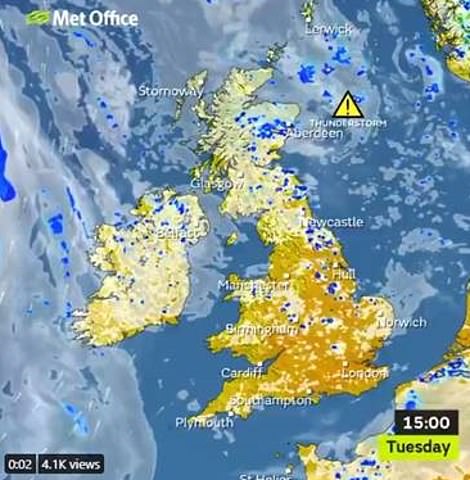 Mr Madge said that over the next few days the weather is expected to be ‘more settled’ compared to last week.

Many areas in England and Wales will see clearer and sunnier spells with the temperature likely to hit the low-20s.

Mr Madge added: ‘Do not expect to see heatwave conditions, but dry, sunny spells for many. However, there may be a few outbreaks of rain in Northern Ireland and Scotland as the week progresses.’

A Met Office forecast for today cited ‘sunny spells for most areas’, while showers fell ‘mainly in the east’ and eastern Scotland battled ‘heavy, thundery downpours’. It added that today saw ‘light winds’ but was ‘feeling warmer’.

It comes as Ladbrokes slashed odds from 5/4 to just 4/6 on the season entering the record books as wettest ever.

Alex Apati of the bookmakers said: ‘It’s looking increasingly likely this summer will enter the record books for all the wrong reasons with even more rain ready to batter Britain.’

Mr Partridge said the next week would be ‘a bit drier and sunnier’ but uncertainty would continue.

He added: ‘Next week does look a bit drier for the whole of the UK. We’ve had an awful lot of rain and thunder storms and there is more rain to come through the weekend. It’s changeable with further spells of rain and showers at times. It’s as warm now as we’re likely to see.’ 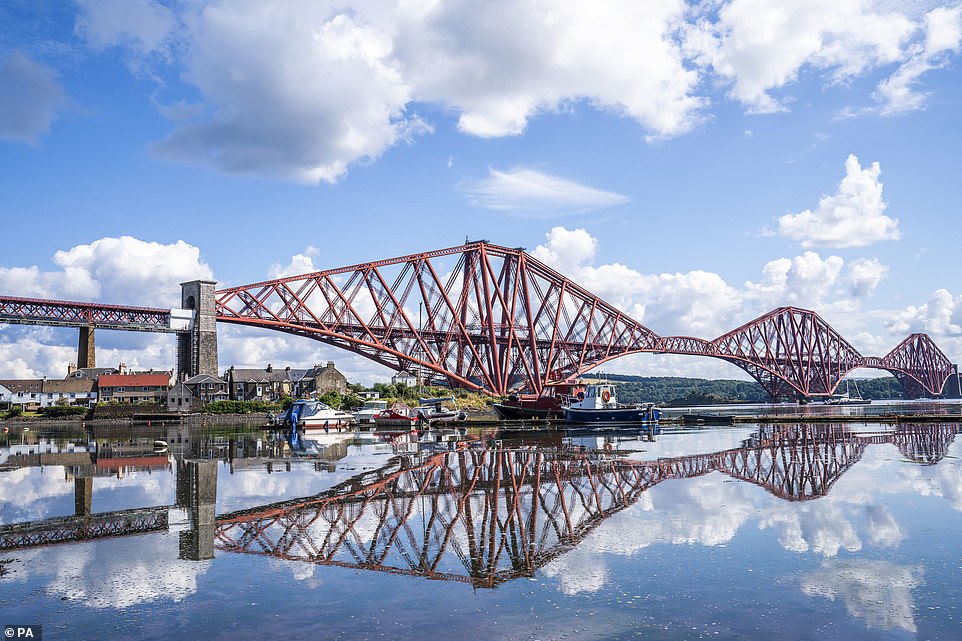 The Forth Bridge is reflected in North Queensferry Harbour, Fife, on Tuesday as the weather took a turn for the better

He said the mercury was set to drop again this weekend while signs pointed to a ‘drier and brighter’ week in seven days’ time.

He added: ‘At the moment I can’t say there’ll be a heatwave but on the balance things are drier and brighter and a little bit warmer.

‘Down in east and southeast we’re likely to see 23C and 24C. That’s today and tomorrow. Into the end of the week it’s low 20s but not quite as warm. It could get to 23C. It won’t be massively different but it won’t be quite as warm as now.

‘The northwest will face rain. Northern Ireland and northwest England will feel it particularly tomorrow and again on Thursday. It could still see as much as 20 mm of rain over a few hours, but that’s usual for the area.’