Center Parcs sharks! Families hit with double whammy on prices as popular holiday firm hikes up rates at on-site restaurants by 60%… while seven-day stays can cost almost double that of EU counterparts

Center Parcs is hitting British families with a double-whammy on prices.

They pay more to stay at parks in the UK than at European parks and they face inflated bills for meals.

The parks offer virtually identical holidays, whether they are in Britain or France, Holland, Belgium and Germany. 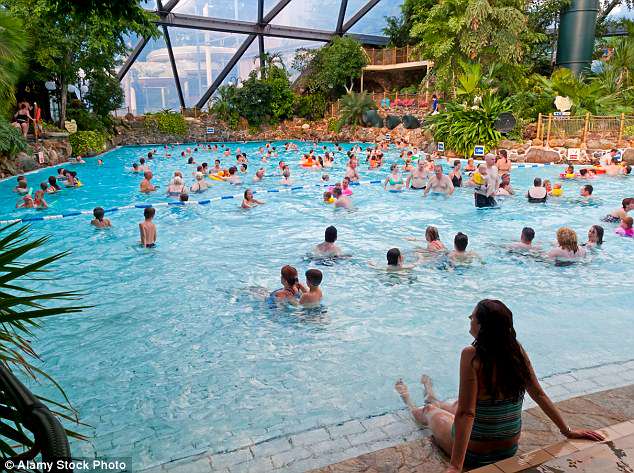 But the price of a one-week stay for a family in the UK can be hundreds of pounds higher and, in some cases, more than double.

Such is the price difference that it could be cheaper for a British family to visit a Center Parcs on the Continent, despite the added cost of taking the car on Eurostar. Including fares and petrol, travel would cost less than £250.

At the same time, chain restaurants at the UK parks, such as Café Rouge, Bella Italia, Las Iguanas and Strada, charge more for family meals than at their outlets in other places in Britain.

This means Center Parcs and the food brands can take advantage of what are effectively thousands of captive customers. For example, a Rouge Breakfast at Café Rouge is £9.50 at Center Parcs in the UK, which is 60 per cent more than the £5.95 charge at a standard city outlet of the chain. 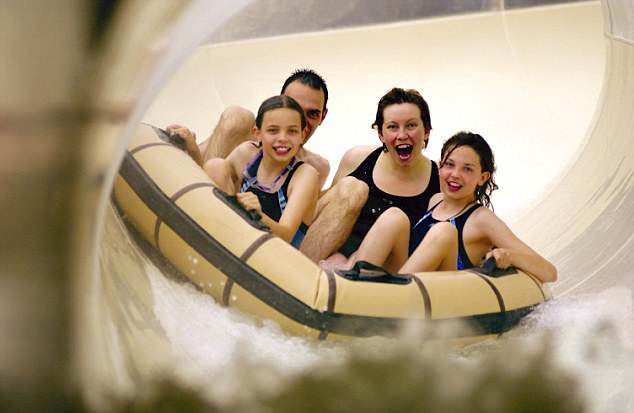 The price difference is so great that it could be cheaper for a British family to visit a Center Parcs on the Continent rather than in the UK (Pictured: a family on a raft ride at the resort in Sherwood Forest, Nottingham)

At Las Iguanas a children’s meal is £7.95, which is 35 per cent more than the £5.90 the chain charges at a city centre outlet. There are also mark-ups on pizza, pasta, drinks and children’s meals at Bella Italia and Strada.

It has long been known that Center Parcs hits parents in the pocket by putting up prices at its five UK holiday centres as soon as the schools break for the summer at the end of July. 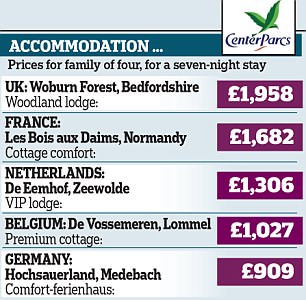 What is less well known is that the prices to stay at the UK parks, with their woodland lodges, lakes, pools, and sports facilities, are so much higher than the prices in Europe.

The UK and European parks are separate businesses, but the accommodation, facilities and services are similar. UK parks offer three levels of accommodation: woodland lodges, executive lodges and exclusive lodges.

The standard lodges have a family bathroom, kitchen, TV, wood burner and patio. The top of range options add en-suite bathrooms, housekeeping services, a sauna, a hot tub and, generally, a games room with a pool table. A family of four staying for seven nights at a woodland lodge in Woburn Forest, Bedfordshire, at the start of August would have to fork out £1,958.

That is more than double the price of £909 for similar accommodation at the German Center Parc at Hochsauerland, in Medebach.

It is also some £930 more than a premium cottage at the De Vossemeren park, in Lommel, Belgium, which is around £1,027.

The holiday company was set up by a Dutch entrepreneur and later bought by the British brewing and hospitality chain Scottish & Newcastle. It sold the European part of the business to a French holiday company and German investment group in 2003.

The British business was subsequently bought by the American private equity firm Blackstone.

Consumer advocate Helen Dewdney, who runs The Complaining Cow website, said: ‘It is really shocking that British families can be charged hundreds of pounds more than those in Europe for what is effectively an identikit holiday, but this is typical of rip-off Britain.’ Rory Boland, the editor of Which? Travel, was particular critical of the higher food prices. ‘Families have already paid a lot of money for their Center Parcs stay and will be rightly upset to find they are being charged inflated prices for the food at chain restaurants on site,’ he said.

‘We heavily reinvest in our accommodation, activities and restaurants each year and our pricing is based purely on demand for the short break experience we offer in the UK, which does differ from Center Parcs Europe significantly.’

Café Rouge, Bella Italia and Las Iguanas are all part of a company called the Casual Dining Group.

A spokesman said: ‘As is common practice across many retail businesses, such as car dealerships, supermarkets and restaurants across the UK, we operate a range of different price brackets across our brands, dependent on where a site is located.’

Strada did not respond to a request for comment.