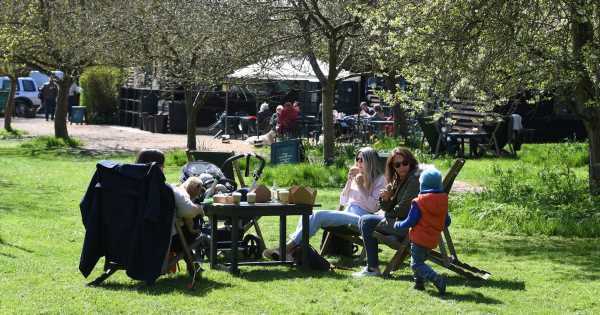 A sunny spike will warm up Brits with a five-day 20C heatwave, weather reports predict.

La Nina, a climate pattern, will play a huge part in the temperature skyrocketing towards the end of the month.

Forecasters say the mercury is expected to reach high 20Cs and in some cases, it could reach low 30Cs.

The spike will balance out the colder conditions we've seen over the past couple of months, forecasters have said.

They've also warned that this summer could be one of the warmest the UK sees from the past decade.

Jim Dale, meteorologist for British Weather Services, said: “There will definitely be some spikes of heat as we go into summer when I expect to see temperatures in the high 20Cs or even the low 30Cs.

“This is largely because of a balancing effect which, after the colder period of weather over the past couple of months, dominated by a northerly airflow, should revert and come from a more southerly direction.

“This will bring more in the way of hotter weather as we go through the end of spring and into summer.

However, April saw an icy start with snowfall and wintry conditions blasting Brits up and down the country.

But temperatures are on the up, with Ladbrokes slashing odds on the month going down as the hottest April on record.

Mercury prepares to rise and the bookies cut odds from 12/1 to 5/1 on it being a record-breaking hot month.

Alex Apati of Ladbrokes said: “Despite snow falling earlier this month, there’s now an outside chance of this going down as the hottest April ever with temperatures back on the up.”

Exact predictions of the end of the month are tricky, writes BBC weather.

“Unfortunately, as we head into late April the forecast gets a little trickier,” it reported.

Looking ahead for next week, from Monday, April 19 until Sunday, April 25, the broadcaster says “generally we expect a changeable week with the wettest weather in the northern half of the country and some dry, mild spells for southern areas.”