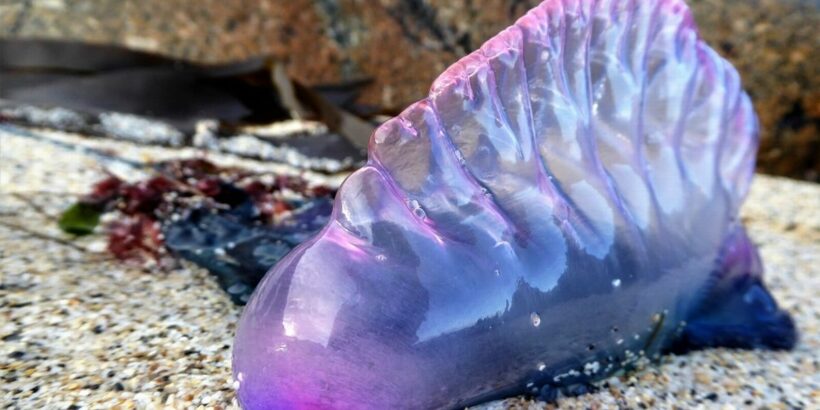 A ‘jellyfish’ with a sting so lethal that it can kill a human has been found washed up on a beach in the UK.

The Portuguese Man O’ War, which often gets mistaken for a regular jellyfish, can grow to 12ft but its tentacles can grow to as long as 160ft and are almost invisible.

They are described as looking like a large translucent purple float, featuring a crest tipped with pink and long blueish-violet tentacles.

The deadly sea creature has been spotted by locals in Cornwall after they washed up Sennen Beach and nearby Portheras Cove, according to CornwallLive.

A second sighting of the Portuguese Man O’ War has also been reported at Portheras Cove near Pendeen.

A group of community volunteers called Friends of Portheras put out a warning on Twitter about the unusual-looking creatures being spotted.

They wrote: “Our seasonal visitors are back! #PortugueseManoWar admire but DO NOT TOUCH & report sightings to Marine Conservation Society.”

There has also been reports on Twitter of the Portuguese Man O’ War being spotted on Bryher, an island of the isles of Scilly.

People heading to the beach are warned to look out for them bobbing on the surface of the sea.

They can also be washed up on beaches, usually caused by becoming tangled in seaweed.

Once they become stranded, they often lose their colour quite quickly but are still quite lethal.

According to The Wildlife Trusts' website, Portuguese Man O’ War are rarely found in the UK but can sometimes be seen from September to December following westerly winds.

To keep up to date with all the latest news stories, make sure you sign up to one of our newslettershere.

A spokesman for The Wildlife Trusts said: "First of all, the Portuguese Man O' War is not a jellyfish. It is a colonial hydrozoan, made up of small individual animals called zooids – each with their own specific function, e.g. feeding or breeding.

"They can't live separately and function together as one 'animal'. Cool, hey? The Portuguese Man O' War lives at the surface of the open ocean, held afloat by a gas-filled bladder. This has a crest-like structure at the top which acts as a sail.

"They can't swim and are at the mercy of the winds – which is why they often end up washed ashore after big storms.

"They are fearsome predators, catching small fish and crustaceans with their long stinging tentacles.

"It's these tentacles that you need to watch out for too – they can sting long after the animal has died.”