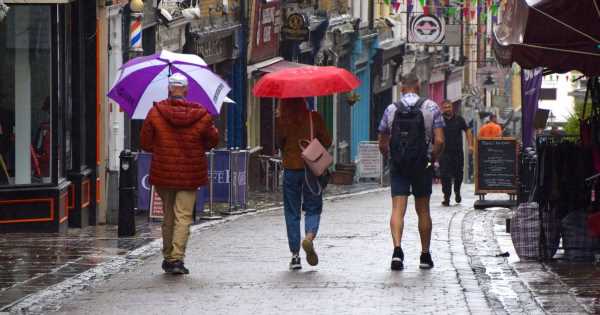 Heavy rain is set to return to the UK with only four more days of sunshine expected.

According to BBC Weather's Matt Taylor, he said Wednesday (August 31) and Thursday (September 1) is set to have sunny weather, however temperatures are set to drop to 5C on Tuesday morning (August 30).

He said: "Rural parts could get down to 5C or 6C as we start Tuesday morning.

"It will be a bright start for many with one or two showers in Scotland and towards the Isle of Man but some sunny spells breaking through.

"Temperatures are still limited on those eastern coasts as 15C to 17C for some. It's up to around 23C to 24C across the southwest and south Wales once again.

"Into Wednesday, probably a bit more sunshine around. Still the chance of one or two showers developing in northern England but with winds lighter in the north. A chillier start for Scotland.

"First chance of some change on Friday with showers arriving in Northern Ireland later in the day and that's linked to this area of low pressure which will bring some bigger changes for the weekend.

"Drifting its way southwards and joining forces with one in France, it's going to pick up the wind in Scotland, Northern Ireland and northern England.

"Strong gusts of up to 40mph at times and we're likely to see outbreaks of heavy and thundery rain mainly across western areas.

"We'll see more rain across the south as we head into Sunday."

The return of rainy weather follows two months that have been inundated with heatwaves with July's scorching weather setting a national record as temperatures surpassed 40C on July 19 – the hottest day ever recorded in the UK.

Met Office data quality manager, John Penman, said: "This new record is another reminder of just how severe the heat was in July.

"Much like the daytime highs, the overnight temperatures have smashed the previous records during a period of unprecedented heat in the UK."