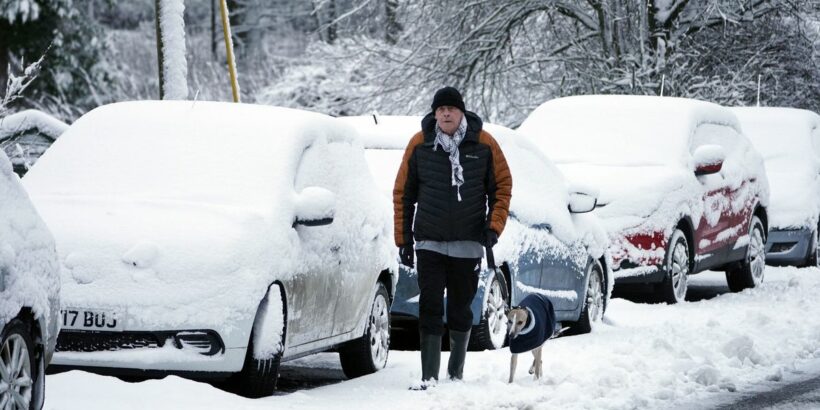 Brits can expect more wintry showers and up to 10cm of snowfall this weekend.

The Met Office has also issued yellow weather warnings for London and most of England, as well as western Scotland.

A new weather warning has been put in place for snow and ice for Sunday, starting at 3am and running until 6pm.

According to the Met Office, the cold front could bring up to four inches of snow to hard-hit areas, and it could disrupt roads and travel.

Met Office meteorologist Craig Snell said: “It will be feeling cold, I think that certainly that will be something that we will all be noticing it will be colder than it was to start the week.

“I think the main thing for most of us will be that we will see some frosty nights and with the ground wet from the rain we've had we may well see some icy patches.”

A band of rain will sweep the west and southwest of England on Sunday, according to the warning, and will turn to snow as it moves eastwards.

Up to 3cm of snow may settle but areas of the UK above 100m could see between five and 10cm.

Snowdonia, the Brecon Beacons and Dartmoor could see as much as 15cm of the white stuff.

The wintry showers follow Storm Christoph which caused havoc earlier in the week.

Hundreds of homes were flooded and thousands were evacuated as flood waters rose.

Over more than a month's rain fell in only 56 hours in hard-hit areas, bursting river banks.

A huge sinkhole appeared in a street in Manchester, and two homes crumbled to the ground as residents fled.

Environment Secretary George Eustace said the flooding was a “real tragedy” for residents in hard-hit areas – but warned of further rainfall next week.

He told BBC Breakfast: “We are particularly monitoring the situation in Yorkshire as the water moves through those river systems and, of course, preparing as well for next week where later next week more rain is expected."