‘You brought death to yourselves’: ISIS fanatics warn of random attacks in Western cities in a poster showing a jihadist next to a blood-soaked victim

ISIS fanatics have renewed their warning of random attacks in Western cities in a new poster showing a gunman next to a blood-soaked victim.

The chilling image shows a masked jihadist with an AK47 standing next to a busy road and wearing full combat clothing.

The poster, released online by a group linked to the terror group, comes with the caption: ‘You brought death to yourselves’.

Lying on a damp pavement at the feet of the militant is the body of a man with blood coming from his head. 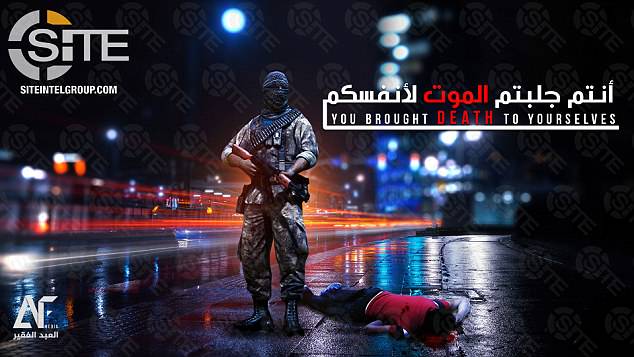 According to the respected SITE Intelligence group, which monitors terror activity, another poster shows a bomb blast in a street in the Canadian city of Vancouver, British Colombia.

The poster is the latest ISIS threat aimed at striking fear into the West.

Last week, a poster emerged showing a body lying in a Manchester street – nearly a year after a deadly concert attack in the city.

The propaganda image showed a darkened street corner in Manchester with the words ‘Islamic State’ scrawled in blood above a corpse on the pavement.

A message accompanying the picture, showing the Little Ancoats Street alleyway in the city’s Northern Quarter, warns: ‘We will fulfill our promises to you’. 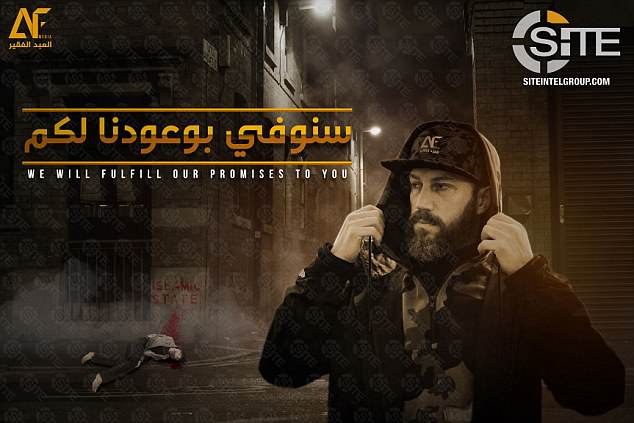 It came just under a year after British-born Salman Abedi killed 22 including children as young as eight by detonating a suicide bomb at the exit of Manchester Arena.

The terror group once claimed half of Iraq and Syria at the height of their self-proclaimed caliphate in 2014.

After officially branding itself ISIS in 2013, the group took advantage of the 2011 uprising against Syrian president Bashar al-Assad to spread.

As the war in Syria turned seven years old last month, ISIS was all but defeated at the hands of separate campaigns by the Russia-backed Syrian military and U.S.-backed Syrian Democratic forces.

And in neighbouring Iraq, only small pockets of ISIS resistance remain