Brussels backs May’s bid for a third vote on her deal: EU warns that Commons votes last night are ‘not enough’ to stop a no-deal Brexit

EU leaders have backed Theresa May’s bid to hold yet another vote on her Brexit deal next week.

The European Commission said Wednesday night’s Commons votes were ‘not enough’ to rule out a no-deal exit, which remains the default outcome on March 29.

Brussels said it is ‘ready to sign’ the withdrawal agreement agreed with Theresa May but the deal has already gone down to two huge defeats in Parliament.

Mrs May last night touted the prospect of a third ‘meaningful vote’ on her Brexit deal but faced an immediate backlash from MPs. 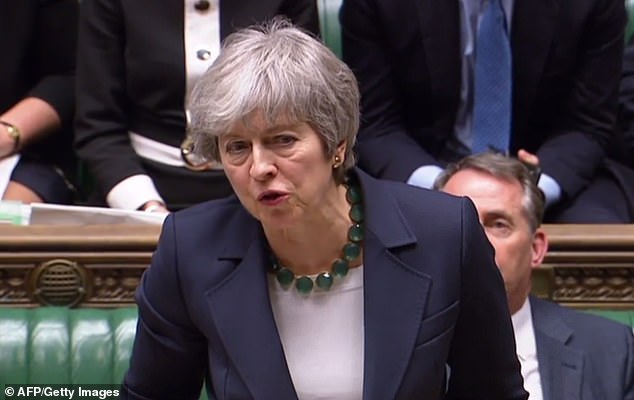 Theresa May (pictured) has touted the prospect of a third vote on her Brexit deal, but hardline MPs have vowed to reject it again

A European Commission spokeswoman said last night: ‘There are only two ways to leave the EU: with or without a deal. The EU is prepared for both.

‘To take no deal off the table, it is not enough to vote against no deal – you have to agree to a deal.

‘We have agreed a deal with the prime minister and the EU is ready to sign it.’

Mrs May said ‘the options before us are the same as they always have been’ despite MPs voting to reject a no-deal Brexit.

From David Churchill in Strasbourg for the Daily Mail

Brussels is ready to enforce a lengthy Brexit delay if Theresa May asks for an extension as attitudes harden against Britain, EU sources said last night.

One official said events in the Commons over the past 48 hours were setting off alarm bells that a more ‘fundamental problem’ existed that could not be solved in a matter of weeks.

Brussels sees the second defeat of Mrs May’s Brexit deal on Tuesday and the Commons vote last night to take No Deal off the table as contradictory.

Officials are starting to believe Parliament is so incapable of delivering a majority on one thing that a short extension will not solve the crisis.

But at a summit in Brussels next week, all remaining 27 EU leaders must agree to give an extension and for how long if it is to be granted.

A senior EU source said last night: ‘Nobody sees how this kind of defeat could be overcome quickly. The assumption is a short extension might not work and there is a more fundamental problem.’

Michel Barnier, the bloc’s chief negotiator, warned that Britain will need to have a fresh plan at next week’s summit if the EU is to give an extension.

He said there was a danger an extension request could be rejected entirely unless Mrs May has a convincing way forward to sell to EU leaders.

Speaking in the EU parliament in Strasbourg yesterday, Mr Barnier warned that the Commons must find a ‘constructive majority’ for a new plan in time for next week’s EU summit if an extension is to be granted. But he questioned whether the bloc would give one if MPs failed to agree.

The Government’s motion for Thursday will ask MPs to back an extension until June 30 to pass legislation if the Commons can back a deal.

If the Commons has not passed a deal by March 20 it is ‘highly likely’ that the European Council would require a ‘clear purpose’ for any extension, the motion adds.

It points out that any extension beyond June 30 ‘would require the UK to hold European Parliament elections’ in May.

Chief Secretary to the Treasury Liz Truss suggested that Theresa May’s Brexit deal could be brought back to the Commons and win majority support, despite twice being rejected by large margins.

‘Ultimately, when you look at the alternatives – which are a customs union, no Brexit or no-deal – Theresa May’s deal is more attractive than those other three options.

‘I think that’s the conclusion MPs will ultimately come to.’

But Mrs May was warned that Tory Brexiteers will repeatedly vote down her deal if she puts it to a vote again.

Conservative Steve Baker said pro-Brexit groups had told him that it was right MPs opposed the ‘rotten’ deal and they should continue to do so.

He told the Commons: ‘I’ll tell the Government now, when meaningful vote three comes back I’ll see to it that we honour what we owe to them to keep voting this down however many times it’s brought back, whatever pressure we’re put under.

Independent Group member Anna Soubry accused the Government of having ‘many pairs of tin ears’ in the wake of this week’s votes.

She told Commons Speaker John Bercow: ‘It is a constitutional crisis and I’m sorry if it bores people on that side of the House who have just voted as Conservatives for a no-deal, but in any event there is a real concern that time and again this House speaks and we vote as you have seen this evening and the response at the despatch box is, in effect, for what we pass to be utterly dismissed.’ 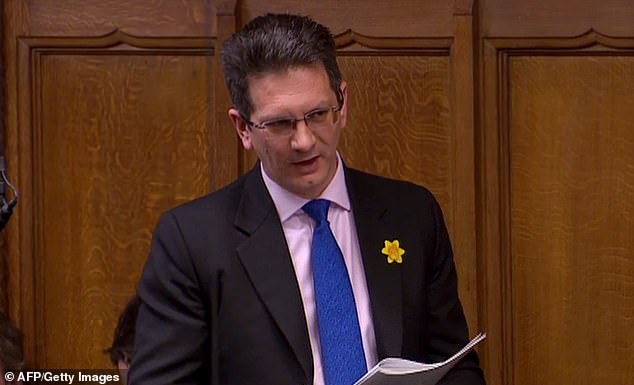