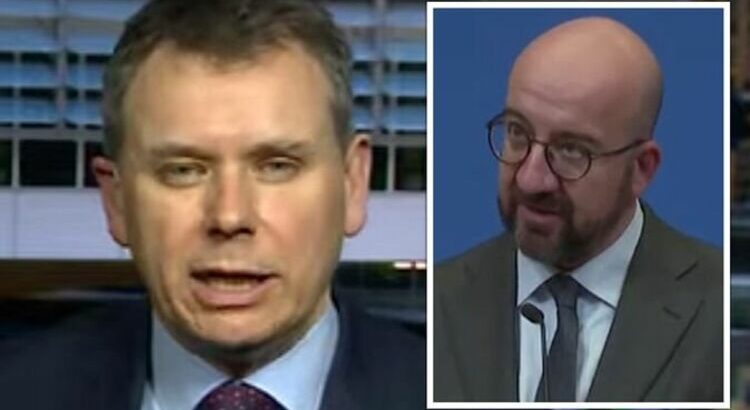 Russia: Kuenssburg outlines impact sanctions will have on the UK

The Sky News reporter said he did not expect Mr Michel to admit to such a significant failure of intelligence in public. Reports of an upcoming invasion of Ukraine began to emerge last week despite Russia repeatedly claiming they had no plans to make a move on Kiev. Mr Parsons noted the European Council president’s comments appeared to confirm the European Union is “on the back foot” when it comes to tackling Vladimir Putin.

Mr Parsons said: “I thought that was an extraordinary moment, frankly, when Charles Michel – this is the President of the European Council, the man who leads an organization of 27 leaders – said, ‘we didn’t know Russia was going to invade Ukraine last night.’

“That may be technically true, but goodness me, how much more information do you need that an invasion looked as if it was imminent?

“We knew, the US intelligence report said it was imminent.”

He added: I find it quite extraordinary that a man in his position couldn’t just think that but also say it publicly.

JUST IN: ‘Putin’s a DICTATOR!’ Boris rages at Russia and warns of MILITARY action as UK steps up

“I think that does add to the picture that Europe is on the Blackfoot, that it doesn’t know how to respond to a leader like Vladimir Putin.”

Mr Michel said he had spoken with Ukrainian president Volodymyr Zelenskyy as the Belgian condemned Russia’s “unjustified large scale military aggression” as well as expressing his solidarity with Ukraine.

“Today both the European Council and G7 leaders will meet to agree on further steps against Russia’s illegal acts and in support of Ukraine,” he tweeted.

“I call on President Putin to stop this war immediately.”