German MEP Jo Leinen told Bloomberg that the tariff dispute with President Donald Trump had grown into a full-blown “war” that “serves nobody”. It comes as the United States threatens to impose further tariffs on European goods worth billions of dollars, intensifying a long-running dispute over aircraft subsidies. The US is responding to the EU allegedly providing subsidies to Airbus.

The goods that the Americans are threatening to place tariffs on are worth about $11 billion every year to European countries, and range from Airbus jets to staples like wine, cheese and frozen fish.

German MEP Jo Leinen told Bloomberg: “Ultimately, the EU has to retaliate with extra tariffs on US goods – the same amount of money.

“So we are in the middle, then, of a trade war that serves nobody.

“And we should settle this dispute by the instruments of the WTO and not by unilateral and arbitrary measures. 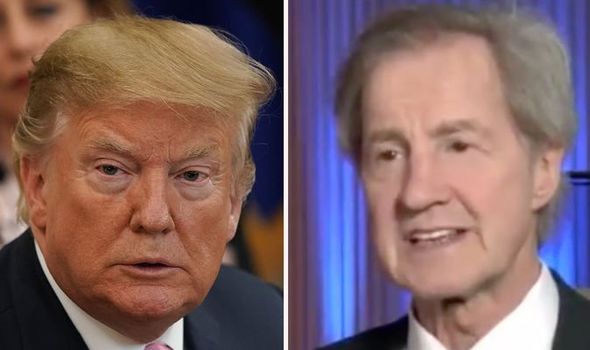 “We cannot negotiate under pressure – it has to be on a level playing field.

“Of course, we have started a new approach to have a US-EU trade agreement.

“But under pressure, with the pistol on the chest, Europe will not negotiate.

“Parliament, with a large majority, has expressed itself against negotiations under pressure.”

The EU’s Chairman of International Trade, Bernd Lange, has also admitted that the negotiations with the US are not going well.

He even went so far as to tell Bloomberg that it was “not possible” to negotiate under the present circumstances.

The Bloomberg host told Mr Lange: “President Trump has said there will be more tariffs because the EU is unfair when it comes to subsidies for companies.

“At this point, do you think the EU needs to walk away from negotiations because of the trade tariffs and the threat of more?”

Mr Lange answered: “We made from the European side a lot of concessions.

“A lot of the steps in the direction of the United States, and now Trump announced additional tariffs on Roquefort and other products.

“So it’s, I think, not possible to negotiate under the circumstances.

“We should be really on a base of cooperation not of confrontation.”

Asking again if the EU would take initiative and leave, Mr Lange meekly responded: “No, not to walk out – to talk.

“Under these circumstances, I think that’s not possible – we need some concessions, some signals from the US side.”