Europe’s migration fiasco: Brussels plan to build EU migrant centre descends into farce as leaders queue to say ‘not in my back yard’

A Brussels plan to build EU migrant detention centres descended into farce last night as European leaders lined up to refuse to host them.

The proposal was billed as an attempt to alleviate pressure on frontline Mediterranean countries, where the vast majority of migrants arrive.

But French president Emmanuel Macron said he would not host one of the ‘controlled centres’ and Austrian chancellor Sebastian Kurz mocked the prospect of one being built in his country. The detention centre proposal was part of a strategy agreed by EU leaders on Thursday night with the aim of ending a brewing immigration row. But key aspects of the plan unravelled within hours of being agreed.

EU diplomats last night poured scorn on the migration deal. One said: ‘It has kept everybody happy, but parts of it are an obvious fudge.’

Another said: ‘This is a bit of paper that will never become reality. It is a mess and will discredit the EU because it is unworkable and everyone knows it is unworkable.’

None the less, the deal appeared to have brought Angela Merkel’s political career back from the brink of collapse. The embattled German chancellor heralded the agreement as an ‘important step’ after it was thrashed out over a marathon dinner in Brussels that ran into the early hours of yesterday morning.

But the proposal to build migrant detention centres across the EU where asylum requests would be fast-tracked sparked a war of words between the leaders. Mr Macron said the secure centres would be reserved for Mediterranean countries at the forefront of key migrant routes, such as Malta, Italy, Spain and Greece. 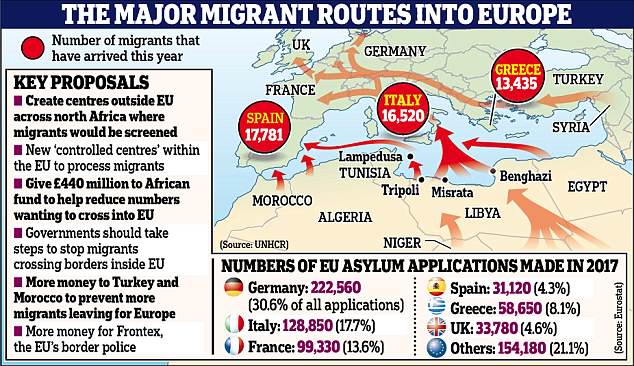 ‘France is not a country of first arrival,’ he said. ‘Some want to push us to that and I refused it.’

But Italian prime minister Giuseppe Conte rejected Mr Macron’s suggestion that the asylum centres would be hosted in countries such as Italy. He said: ‘Macron was tired. I deny what he said.’

Asked if he would host a migrant centre in Austria, Mr Kurz said: ‘Of course not… we are not a first arrivals country, unless people jump from parachutes.’

The centres will only be opened if EU member states agree to them and governments can refuse to host asylum seekers deemed in need of protection. The opt-outs are a concession to hardline member states such as Hungary and Poland.

The plan was signed off by leaders after heated discussions stirred up by Mr Conte, who threatened to scrap any agreement that failed to meet his demands.

After nine hours of talks on migration finished at 3am yesterday morning, he waved a copy of the agreement in the air and said: ‘Today Italy is no longer alone. We are satisfied.’ He said he had bullied other EU leaders a ‘little bit’.

But Spanish prime minister Pedro Sánchez, whose country has seen an increase in migrants, said the agreement could have gone ‘much further’.

The EU agreement backs the controversial creation of asylum centres in North African countries, which would see migrants who are rescued in the Mediterranean returned to a ‘disembarkation’ area to have their asylum claims assessed.

But in their joint conclusions from the meeting, the EU leaders acknowledged that the camps could create an unwanted ‘pull factor’ by attracting asylum seekers who could apply there.

The deal was welcomed by the CSU, sister party to Mrs Merkel’s CDU, which has threatened to close Germany’s borders in a move that she opposes.

Flaws built into plan agreed at 3am

Plan: The creation of migrant centres in EU countries

Flaw: Countries only have to agree to hold the camps on a ‘voluntary basis’, with EU leaders unlikely to sign up to the controversial proposals.

Relocation of migrants from the centres is also voluntary, leaving hard-line governments free to say no.

Plan: The creation of asylum centres in North African countries

They are designed as places to return those rescued at sea but EU leaders admit they could become a ‘pull factor’, meaning asylum seekers would flock to them. No country has come forward to host a centre.

Plan: Invest in Africa to stem the possibility of another migration surge

Flaw: The investment of another €500million (£440million) to the EU Trust for Africa is supported by EU leaders, but the region’s political landscape remains highly fragile. Diplomats said the focus on Africa appeared ‘colonial’.

Plan: Step up the return of economic migrants

Flaw: The ability for EU countries to return economic migrants is plagued by an array of legal complications and international rules. Current efforts on the issue have produced only meagre progress.

Plan: Curb movement of asylum seekers who have registered in the EU already

Flaw: Although not a significant issue at present, member states fear they would once again be able to stop the flow of migrants across borders if there is a repeat of the 2015 migration crisis.