A ‘merciless’ builder conned a pensioner out of more than £35,000 for roof repairs after only being asked to replace some tiles – contaminating the loft with asbestos in the process.

John Gardener, 82, was quoted £8,000 by ‘dishonest’ Mark Bibby to repair tiles on his roof after they were damaged in a storm, a job that should only have cost around £1,800.

A court heard father-of-five Bibby continued to ask for more money as work was carried out, including £10,000 for clearing asbestos which was found.

However, the work was of such a poor quality Mr Gardener’s loft was contaminated, with precious family photographs and other items covered with asbestos. 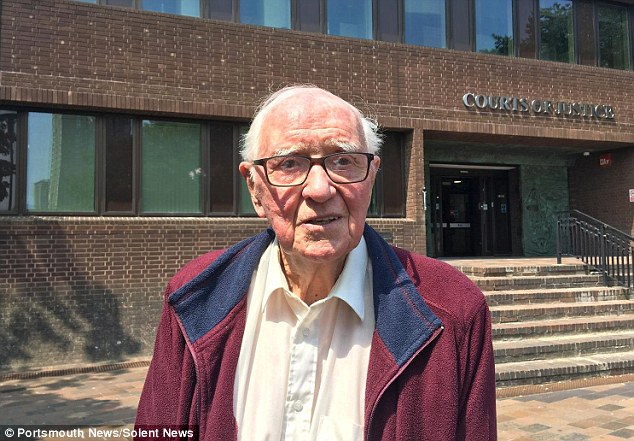 John Gardener, 82, (pictured) was quoted £8,000 by ‘dishonest’ Mark Bibby to repair tiles on his roof after they were damaged in a storm

He and his family were also exposed to the deadly fibres, which can cause serious health problems.

When Mr Gardener’s daughter became concerned she asked for a full invoice, which was eventually put through her elderly father’s door but was from a company that did not exist.

But the builder, who ended up swindling Mr Gardener out of £35,350 in total for the botched repairs, was spared jail so his elderly victim could receive compensation.

Bibby had been working on a nearby property when Mr Gardener asked him to repair some storm damaged tiles on his roof, Portsmouth Crown Court heard.

Prosecutor Duncan Milne said the builder told his victim it would cost £8,000 to complete the repairs, although a quantity surveyor said this should have cost a maximum of £1,790.

Mr Milne said building costs racked up as Bibby hired people to work with him at the address in Portsmouth, between March and July 2016, and due to the discovery of asbestos.

The court heard it was difficult for Mr Gardener to keep track of costs because he was regularly asked for cash and cheque installments as the work continued.

It was also heard the 82-year-old’s requests for itemised bills were never met, with Bibby reluctant to co-operate.

Eventually, a bill for £39,550 was posted through Mr Gardener’s door, signed by a Tim Martin and from a company called Ruby’s Homes.

Prosecutor Mr Milne said neither of these existed and the pensioner had refused to pay the additional £4,000 that was asked for. 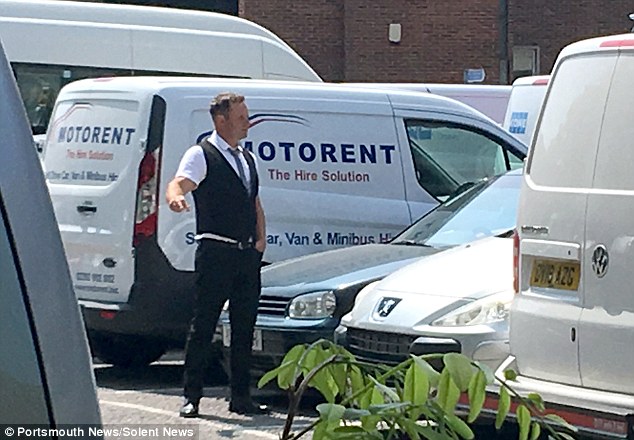 A court heard father-of-five Bibby (pictured) continued to ask for more money as work was carried out, including £10,000 for clearing asbestos which was found

The court heard Mr Gardener had been upset when he realised Bibby’s poor quality work had led to his family being exposed to asbestos.

Mr Milne said: ‘His family had been up there several times unaware of the risks

‘His family had been up there several times unaware of the risks. He has lost family memorabilia, Christmas decorations and photos that had to be thrown away.

‘The money he has spend on the roof was from his savings and was meant to go towards his granddaughter’s wedding and family holidays and now it’s gone.’

The prosecutor added: ‘Mr Gardener thought [the cost of the work] sounded expensive, but he trusted Bibby; Bibby took advantage of his trust.’

Bibby, of Portsmouth, admitted two counts of engaging in a commercial practice which, by omission, was misleading, two of knowingly engaging in reckless practice and one charge of making a false invoice

Mitigating, Thomas Evans said Bibby’s poor work and over-charging had not been ‘malicious’ but was caused by ‘incompetence’.

Mr Evans added: ‘The quotations provided highlight the defendant’s lack of competence in his line of work.

‘Mark Bibby did not set out to deceive Mr Gardener but found the work got out of control and he did not check the work being carried out by others he was paying.’

Judge David Melville QC told Bibby he ‘must pay’ as he handed him a two year suspended prison sentence and ordered he pay back £500 a month for the next five years to his victim.

The judge said: ‘You swindled Mr Gardener from the beginning.

‘It was pitiless, merciless and thoroughly dishonest. You were also incompetant in what you were doing.

‘You have got your liberty today but at a price, you must pay.’

Speaking outside court, Mr Gardener said: ‘My main concern was will I get the money back, and hopefully I will now.

‘It would have been nice to see him go to prison and be able to tell everyone that but I wouldn’t have got my money back if that was the case.’