Disturbing footage of a Spanish fighting bull collapsing in the street has sparked fresh anger about blood sports.

The video shows the animal moments after being released into the streets during the traditional ‘bou al carrer’ bull run in Villareal, Spain.

In the footage, the bull is seen struggling to its feet and taking a few steps before its legs give way and it slams into the floor.

The tormented animal then slams its horns repeatedly into the road, before a couple of spectators intervene and drag the bull to its feet by its tail.

Moments later, the bull collapses again, unable to support its own weight.

Tauromaquia Es Violencia (Bullfighting Is Violence) is now calling for all forms of bullfighting to be banned and will march through Madrid this Sunday.

Organisers hope to rally more than 30,000 protesters from 180 activist groups.

Spokeswoman Marta Esteban said: ‘This bull was in a cage, like a box where they carry them, which is only two metres by two metres.

‘In these boxes, they stay in the dark in extremely high temperatures for many hours. 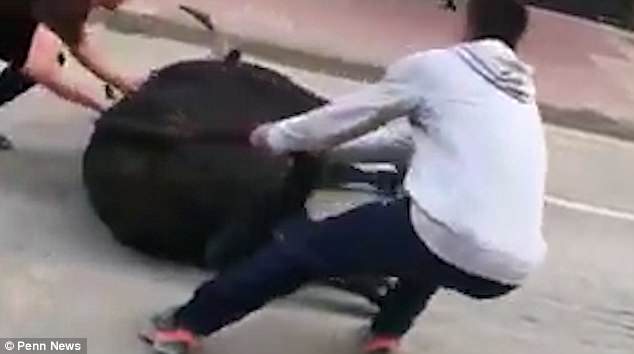 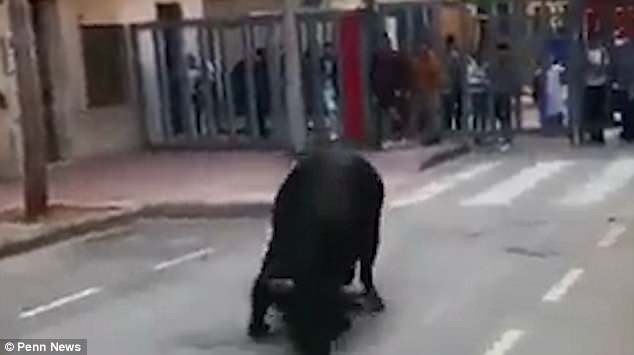 The bull attempts to hold itself upright, but it has become too weak to stand

‘Some of them lose about 30kg before they are even released. So that already is a terrible suffering for them who just want to be with the herd.

‘The bull started having that reaction, of not being able to walk, just 10 seconds after it was released.’

Marta said the bull had smashed its head against a barrier on its release.

She continued: ‘Veterinarians say it [collapsing] might be some sort of consequence of the impact to its head that affected its nerves. It could be just exhaustion.

‘In any case, we want to make it clear that there is no show with bulls that does not imply cruelty, even if there is no blood.

‘These animals suffer from the moment they are taken away from the fields and put in a box, in the dark, at extremely high temperatures, for hours.’

It’s believed some 20,000 animals are used in bullfighting and similar events every year in Spain.