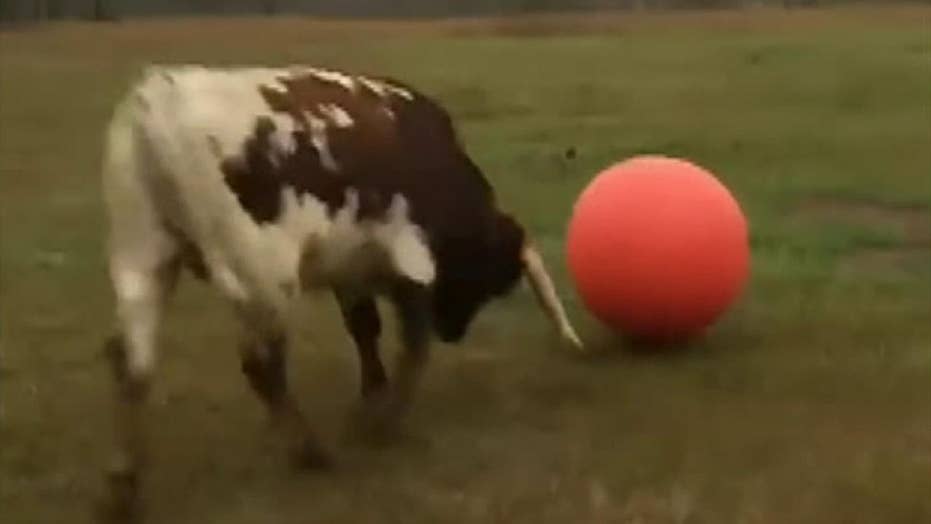 Raw video: Bull in Texas plays with an inflatable ball

A longhorn bull at an animal sanctuary in Texas accidentally popped his beloved red ball — but luckily, a replacement soon came his way.

Tex, who lives at the Ima Survivor Donkey and Farm Animal Sanctuary in Cleveland, loved his large yoga ball. He and a friend at the sanctuary, in a video posted to Facebook on Feb. 22, seemingly played with the ball together.

The bull could be seen taking the ball before running off and chasing it.

"Oh no, bring it back to me, Tex!" a voice behind the camera shouted. "Bring it back around, Tex!"

But Tex was playing near a barbed wire fence. In a sad turn of events, Tex's big red yoga ball popped.

The bull then picked up the deflated ball with his horn, seemingly sad. He tried to play with the punctured ball before giving up and running away.

However, in a lucky turn of events for Tex — someone gifted the longhorn another red yoga ball. In a follow-up video posted Tuesday, Tex could be seen laying down hitting the ball playfully with his horns.

"Big day at the farm today…. Tex got his new ball!" the sanctuary wrote online. He had a "heart to heart discussion about boundaries" with someone at the farm, and "huffed a little- but agreed to be more careful."